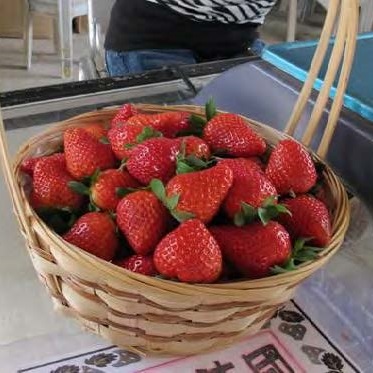 Being a self-insufficient city long from the past till now, Hong Kong imports most of its food from overseas. Particularly concerned with apples and strawberries imported, it is found that around 50% of the strawberries are imported from the USA whereas altogether 70% of the apples were imported from China and the USA1. Of 40%2 of the imports of apples from China, it is found that Shandong Province, Gansu Province and Shaanxi Province are the largest suppliers3, where Shandong Province indeed contributed more than 50% of the total imports from China4. Developed till now, there are more varieties of apples and strawberries which are available in Hong Kong, such as honeycrisp, an apple cultivar. These fruits can in common be found in supermarkets and wet markets. Yet, with the change in social value focusing more on heath, they are becoming more readily available in some local organic farms and shops, such as Homegrown Foods5. To have a better understanding of their food networks, the process of production, distribution and consumption, as well as the waste produced during these processes are examined. 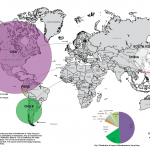 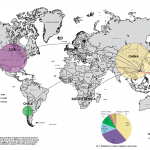 Production
Apples and strawberries are produced through farming. The preliminary steps they involved are similar, both involved farmland selection and soil testing and preparation. Several factors are considered in selecting the farmland, such as the space, availability of water, etc. In Hong Kong, farmlands are mostly limited to rural areas where larger plot of lands are available. Examples are the strawberry farms in Kam Sheung Road and Fanling.

Farmers then have to undergo soil testing and preparation which is usually started 6-9 months prior to planting. The pH value of the soil should be near to a pH value of 6.5-7.0 for apples and strawberries to grow. Sulphur or lime are added if the soil is too alkaline or too acidic respectively. Nutrient analysis on the amount of nitrogen and weed control will be conducted. To facilitate the removal of excessive water, drainage tile should also be installed. Since strawberries are relatively more expensive, more farmers will now plant cover crops before actual planting to eliminate weeds and provide nutrients. This is especially so when they are growing organic strawberries.

After the preliminary processes, nurseries are bought. When transplanting the apple nurseries, farmers have to dig holes wide and deep in the farmland such that the roots of nurseries are in the ground with graft union 2-3 inches above the final soil level. The holes should also be 15 feet apart to provide enough space for the apple trees to grow. The process of transplanting the strawberry nurseries is similar. Only is that the holes should be in a row system of 20 inches apart and the soil be up to the middle of the crown. Water and sunlight, as well as pesticides and fertilizers are then supplied. Organic fertilisers like debris water are used in organic farming8. While sticky traps are used particularly to deal with apple maggots, nets are installed to prevent the birds from eating the strawberries. Unlike apple, strawberry, being a seasonal fruit, is best to be planted in spring and late fall, depending on the varieties. Apples and strawberries harvested then are usually refrigerated to maintain the freshness and transported to different locations for sale. 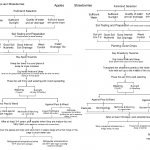 Distribution
After harvesting, the apples and strawberries will be distributed from suppliers to retail shops, traditionally through wholesalers. Wholesalers will first conduct inventory evaluation where appropriate quantities of fruits will be ordered by considering the durability of the fruits.

Therefore, the amount of strawberries ordered is usually much lower than that of apples as strawberries get rotten more quickly. Wholesalers will then contact suppliers for the order during which price and quantity will be negotiated.

However, as supermarkets like Wellcome and Parknshop in Hong Kong are growing bigger, they now have undertaken the role of wholesaler. This distribution method is called “bypass” and indeed, around 50% of fruits are imported through this practice now.10 Under this practice, apples are sent to the Kwai Chung Container Terminals by ship instead of wholesale markets,11 whereas strawberries are transported by planes to the Hong Kong International Airport as most of the strawberries sold in supermarkets are not from China. The fruits will then be transferred to supermarkets’ warehouses for the purposes of repackaging and storage. Fruits will later be sent to different supermarkets by local logistics companies.

For organic shops, since they are still comparatively new to the markets, wholesalers are less likely to involve, leaving the shop owners to perform the role of wholesaler.12 To conclude, the wholesalers now serve only as middlemen between the suppliers and stall owners in markets. 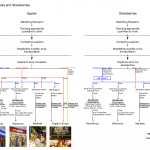 Consumption
Since demand and supply are positively correlated, the consumption pattern of apples and strawberries in Hong Kong can be imputed from the import quantity over the years.

From the above table, the consumption of apples have reached its peak in 2011 and experienced a gradual decline in 2012-2013, while that of strawberries have shown a steady growth over the five years. Strawberries have long been regarded as a more high-end type of fruits because of its high production cost and perishability. With the development in transportation, the distribution costs of strawberries have been reduced and strawberries now become more affordable to Hong Kong citizens.

While supermarkets and markets have contributed to most of the consumption in Hong Kong, organic apples or strawberries from organic shops or farms only account for a small portion. This consumption behavior is highly related to the seasonal availability and consumer behavior.

First, as to seasonal availability, supermarkets and markets receive apples and strawberries from all over the world. The global supply chain enables them to have omni-available supply throughout the years. To the contrary, organic shops or farms focus on limited species of apples or strawberries and this results in unavailability in certain seasons. For example, Mr Tang, the owner of an organic farm, does not supply apples to Hong Kong between May and September14. His apples are only available in small quantity and limited time periods.

Second, consumer behavior has determined the local consumption pattern. Since supermarkets and markets can enjoy economies of scale and can therefore supply apples at a lower cost than organic shops, people will usually buy fruits in the former places. For example, while an apple from Parknshop is priced at $5, Mr Tang’s apple is priced at $10-15 each. However, Mr Tang pointed out that organic apples are increasingly welcome by higher-income groups in recent years. They are concerned about the nutrition values and the quality of apples, and are willing to pay for a higher quality.

The difference in demand has contributed to a more varied consumption pattern in Hong Kong. While purchases in supermarkets markets continue to serve as a mainstream, organic fruits can respond to the increasing need for food safety and quality. 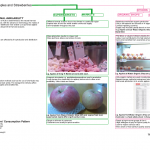 Waste
Concerned with inorganic waste, pesticides and fertilizers may be used excessively during production. The wastage of fertilisers will cause a heavier burden on the demand on nitrogen, leading to resource shortage. Likewise, paper boxes and bags and bubble wraps used in storing the apples and strawberries during distribution and consumption will usually be disposed into landfills. Little are recycled or reused.

On the other side, organic wastes such as rotten, immature and unconsumed fruits are produced during the 3 stages of production. While some famers may use the rotten or immature fruits as fertilisers, most of the organic waste, including the unconsumed fruits in restaurants and hotels will leave into landfills. Luckily, there are still some NGOs and local entrepreneurs working to fight against the wastage problems by for example, collecting unsold fruits during the distribution stage and leftovers during the consumption stage, which then turn them into meals to serve the needy. Some organisations are also trying to turn leftovers into fish feed.15 It is obvious however that these kinds of green actions are still lacking.

Landfill should not be the only solution for wastes and leftovers. People should increase their awareness and adopt alternative ways to handle the wastes for the sake of improving our environment and sustainability. Government should thereby through different means such as media to promote a green environment and increase the awareness of citizens. Otherwise, our world will be dying. 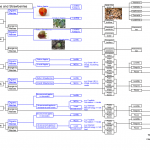 Conclusion
To conclude, with the advance technology and increasing share of supermarkets, the food network for apples and strawberries changed in all three stages. However, it should be noted that the environmental impacts should not be ignored and indeed, required our close attention.