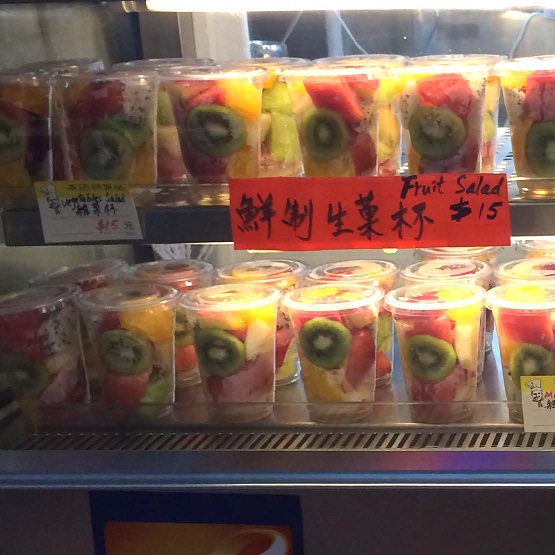 What do you say before you have a meal? “Bon appetite”, “qǐng màn yòng” or “Sihk Faahn”? Across different nations and religions, other than praying, people tend to say something similar – “enjoy your meal”, instead of a “thank you”. Although we have been taught to be grateful for the food that we can take in since our early age, with the increasing physical distance with farmlands and convenience in acquiring food, we seem to take things for granted. What are the overlooked stories behind a bite of kiwi, or processed pineapple? 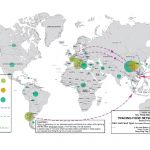 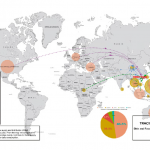 Origins of Fruits Grown
Fruits are grown according to the climate and other various condition of a place. Normally, the soil fertility near the water is richer than any other parts of land, even if they are on the same land. When the fruits are grown, in order to exchange for more food, export is required in order to trade off for other food with places, no matter it is in the past or nowadays. Coincidently, as many of these lands are near the water, transporting through shipping is convenient. Although many of the coasts now are developed, but from the regional map of the kiwi grown in China, many of these farmlands are still located near the water. This is very efficient to the exporting of fruits.

According to our analysis, pineapples are relatively grown in tropical areas (Figure 2). In the meantime, kiwi fruits can be grown in relatively world-wide. However, New Zealand takes up mainly 51 percent of the importing quantity of fresh kiwi into Hong Kong due to lower imported price, which is a comparative advantage over Italy and other countries in terms of geographic location (Figure 3). This, on the other hand, demonstrates the relationship and importance between geographic location of the origin and the destination. 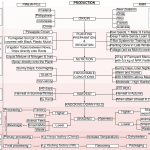 Import and Export Trading Point
The Shenzhen Wholesale Fruit Market acting as the integrating point for most of the China-grown kiwi supply (Figure 4). With the advantage on the geography, it is very close to Hong Kong, and therefore Hong Kong is greatly benefited from the abundant kiwi supply, where 27.5 percent of the Chinese kiwi is distributed to all parts of Hong Kong through the Western Wholesale Food Market and the Yau Ma Tei Wholesale Fruit market. On the other hand, Hong Kong an ideal exporting point for these Chinese supply to foreign countries.

Interestingly, while China is supplying its own kiwi to Hong Kong and other parts of the world, in return, Hong Kong re-exports the foreign refrigerated kiwi to China. When high quality kiwi fruit are imported to Hong Kong from New Zealand, Italy, Chile and France, etc., only 41.7 percent goes for Hong Kong local consumption, while 58.3 percent is re- exported to China mainly.

From the two phenomenons, it is found that Hong Kong enjoys the geographic advantage of connecting China and the outside countries and acts as the global logistic hub. On the other hand, with the renowned reputation of the food quality control in Hong Kong, it guarantees countries the quality of food import and export. This is the reason why Hong Kong has been a popular food trading point.

Distribution
The Western Wholesale Food Market and the Yau Ma Tei Wholesale Fruit market are facing increasing number of competitors. Nowadays, a lot of fruits reach the large retailers, i.e. supermarkets and department stores directly, bypassing the wholesale markets. With the more comfortable shopping environment and convenience locations, many Hong Kong citizens do not mind paying a higher price for the same good. Also, with the opening up of wholesale fruit markets in mainland China, a lot of suppliers and vendors have shifted their trading location. This is due to the greater market in Mainland China and its ability of ordering more fruits per purchase, which in turn lowers the overall cost and attracts more vendors. Hence, there is an increasing number of secondary wholesalers sending their own trucks, purchasing from Shenzhen wholesale markets instead of local primary wholesalers. 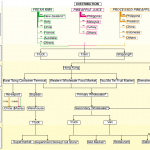 The wholesalers are sharing the operation cost of the market. In order to lower the rent and thus the price of goods, the following designs are used: skylight, air ventilation system, open-door design and white colored walls etc. As the peak hour for trading is at night, during day time, although the market is still operating, the need for light is minimal. The use of skylight can light up the indoors without wasting electricity. The air ventilation system instead of air-conditioning is used to further cut electricity cost. The open-door design can facilitate the efficient loading and un-loading stocks, as well as allow sea breeze bring in fresh and cool air. The outer walls are painted in white to reflect radiation and lower the indoor temperature during summer.

Besides, the transportation system is well-developed. The wholesale market is located by seaside, for which the ports allow direct loading of stocks from ships (Figure 5).
There are also highways and tunnel next to the market, and the paths are wide, which allow a convenient transportation for vehicles. 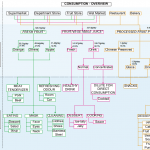 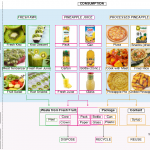 According to Roha, Zainal, Noriham & Nadzirah (2013), 35% of pineapple is wasted during the processing of pineapple: the peel, the core and the crown. Disposal of the pineapple waste can cause serious pollution to the environment. Yet, the waste can be turned into valued-added products. The peel can produce paper, banknotes and cloth; while the core can be used for producing frozen pineapple juice concentrates, extracted juice for alcoholic beverages or for vinegar, a nutrient substance in culture broth and cellulose production, and the substrates for the production of organic compounds (Saravanan, Muthuvelayudham & Viruthagiri, 2012).

As mentioned by Zespri, the skin peels, fruit hair, flowers and waste kiwi are used to produce “biospife”, a bio-plastic which have the functions as spoon and knife. The bio- plastic are highly environmentally friendly as they recycled the fruit wastes and turn them into biodegradable product.

Other than the hardware of the wholesale market, the software – intelligence of people- also attributes the success of a high efficiency. The secondary wholesalers have places their fruits in the coolstores orderly according to the vulnerability of the fruits. This facilitates them to increase the efficiency and prevent unwanted loss in storage. 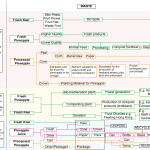 Extra: Fun Facts about Kiwi
Which place will you think of when you see a kiwi? Most people will answer New Zealand. It is named “kiwifruit” as kiwi is indeed a type of bird that represents New Zealand.
Yet, this is actually a product of globalization. Kiwi first grows in China, called Chinese Gooseberry, which are then transported to and cultivated in New Zealand. There are three major types of kiwi: green, golden and kiwi berry, for which the green and golden kiwi are commonly found in Hong Kong.

Reflection
Through the tracking of food network, we realized the overall routes and nodes of food networking before reaching our dishes. This greatly facilitates our knowledge to the operating food system, not only knowledge on processed pineapple and kiwi, but also the overall food system around the globe. The course has provided us a brand-new angle to view a food product. The big story behind one single food product is way beyond what we can see from the package of the product. Through understanding the whole process, we could have a more in-depth look at the products we are consuming and learn to admire how it is brought to us.