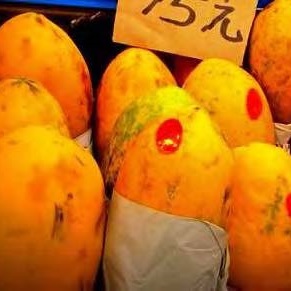 In this project, we are looking into the food network of mango and papaya. Mango is a species originated from India. The farming of Mango starts more than 4000 years ago in India. At around 400-500 B.C. Mango is introduced into the Malaysian Peninsula. Then in the 16th Century the Portuguese introduced Mango into Africa and Brazil, in late 17th Century it is introduced to the Philippines. In the following centuries Mango is gradually introduced into the Netherlands Mexico, then Hawaii and Florida to enter the America. 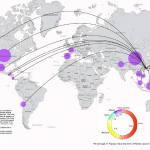 Nowadays commercial farming of Mangoes exists in all these countries. Although India is the origin of Mango, the main importing countries for the supply of Hong Kong’s Mangoes are Thailand, the Philippines, Malaysia, Indonesia and Hawaii. In addition, not every country that produce mangoes will also produce dried mangoes. And not every country that produce mangoes will export them to Hong Kong. Local farms also practice mango farming but the supply is very low. Some special species such as South African Mangoes which has red skin is also introduced to Hong Kong in recent years, however they are imported at a very low quantity. Papaya is a species originated from South Mexico and Middle America areas. Nowadays Papaya is widely distributed among tropical and sub-tropical areas such as the Philippines, Thailand, Malaysia and South China. Although the production of papaya is diversely distributed, the importing pattern of papaya into Hong Kong is not diverse at all. More than half of the imported papaya comes from South China, more than 30% comes from Malaysia, and the remaining comes from Hawaii, Thailand and multiple countries. Local farms in Hong Kong also grows papaya, yet the quantity is too low to be significant comparing to the imported quantity. 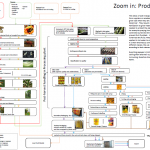 Concerning how mangoes and papayas are transported to Hong Kong, those from China are transported by truck and those from other countries by ship. It is found that very few mangoes and papayas are transported by air as transporting by air is usually for fruits that are easily rotten while mangoes and papayas are not. The first step of mango and papaya production is to grow the fruits. The seeds of both mango and papaya can be obtained from suppliers or selected fruits. Both fruits are grown best when they are planted during July to December. They require daily irrigation and monthly fertilization for healthy growth. Plant protection is also needed to protect the plant from disease and pest, for example by spraying Horsetail extract. Harvesting the fruits prematurely can also prevent fruit fly attack. To harvest the fruits, collecting nets are used. After the harvest, both fruits are washed in hot water to eliminate surface bacteria. It is then followed by sorting and grading into different classes, as the use of the fruits are different according to their classes. Exporting papayas is limited due to difficulties in storage and their susceptibility to bruising. Therefore they are packed with many layers. As for the distribution of mangoes and papayas, products imported from different places take different routes. For fresh and processed papayas and mangoes transported by truck, i.e. from China, they are all transported to the Shenzhen Buji Agricultural products Wholesale Market after packaging. Then they are distributed to the Yau Ma Tei Wholesale Fruit Market, Vegetable Marketing Organization and Western Wholesale Market, where they will be further distributed to retailers. For those transported by ship, i.e. from other countries, they are all transported to the Hongkong International Terminals, where some fruits directly goes to retailers like grocery stores and supermarkets, while the other fruits are transported to the Yau Ma Tei Wholesale Fruit Market, Vegetable Marketing Organization and Western Wholesale Market and then to different retailers. 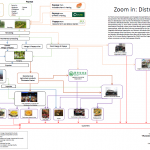 For fresh papayas from local farms, they are transported to the Vegetable Marketing Organization and Western Wholesale Market where they will be further distributed to retailers. Some are sent to the Tai Po Farmer Market Organized by FVMCS and the Organic Farmer’s Market @ Central where consumers can buy fresh papayas directly. Mangoes and papayas are available for consumers in different forms, including fresh fruits, dried fruits, canned fruits and fruit juice. Fresh fruits can be eaten directly or as ingredients in salads and desserts served in restaurants and hotels, sweet soup in Cantonese dessert shop and cakes in bakeries. Fresh fruits can be bought from supermarkets, fruit stalls and fruit shops in wet markets. Dried fruits and canned fruits are both processed food that allows longer storage compared to fresh fruits. They can be bought from grocery stores and supermarkets. Fruit juice is a liquid form of fruits and can be found in supermarkets, grocery stores as well as some fruit stalls.

Different waste are produced along the network. First there are fruit skins, seeds and damaged fruits from the processing plant. Then there are unsold fruits from wholesale markets. Starting from the retailer level, there are packagings of the fruit products such as card boxes, card boards, foam boards, foam nets plastic packaging, cans, etc. These wastes are produced by retailers as well as consumers when unpacking the products. Consumers also dispose fruit peels and seeds when they eat the fruits. For the waste produced by the processing plant, some of them are used to make compost. Some unsold papaya and mango from wholesale markets and retailers, as well as the uneaten ones from customers, are collected by food charities such as Food Grace. Some damaged fruits from retailers and some uneaten fruits from customers go to the Kowloon Bay Pilot Composing to be used in making fertilizers. Paper wastes are collected by paper collection sites and recycled. Most of the other wastes go to the landfills. 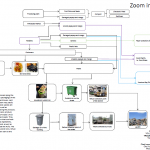 In conclusion, the food network of mangoes and papayas are very similar. Both fruits are mostly imported from Malaysia, Thailand, Philippines and China and have very few local production. Also, their transport route to retailers are more or less the same. Moreover, their production is very similar in terms of their growing season and method. Besides, both fruits can be processed to make products like dried fruits, canned fruits and fruit juice. They can also be used to make desserts and salads. Fresh fruits of both mango and papaya can be consumed directly too. Chak Leona Ka Yan Choi Yuet Ching Woo Tsz Wai