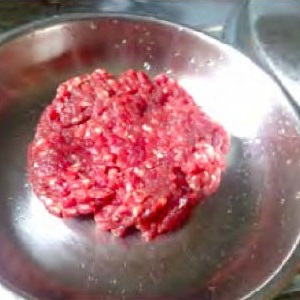 The Network of a McDonald’s Big Mac Beef Patty

The beef patty is the core and heart of the Big Mac, and its taste is essential to Big Mac’s fame. To ensure that each beef patty has a similar standard, McDonald’s adopts a rigorous process of mechanization to ensure that uniformity is met. Despite minor taste modifications tailor made to individual regions through the process of localization, uniformity is still an essential aspect of highly processed foods such as the Big Mac. In this essay, we will first detail the production and transportation process of the beef patty. We will also look at an overview of the treatment of waste created from the production of beef patties. 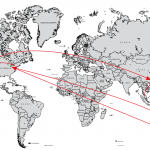 Production Process
Beef patties are made by first grinding fresh or frozen raw beef and forming them into patty shapes. The texture is affected by the lean-­‐to-­‐fat ratio of the beef as well as diameter of various steel “breaker” plates (Beef Food Service, 2014). To ensure the uniformity of all beef patties, McDonald’s has only one major supplier of beef patties for the global chains, which is Keystone Foods. There are various Keystone production facilities located around the world. However, since all raw food products of Hong Kong McDonald’s are not manufactured locally, they are imported from the Asia region (Robertson & White, 2003). It is interesting that while China and Hong Kong are in a close vicinity, it is highly possible that the beef patties imported in Hong Kong are not produced in Keystone’s mainland factories, but most likely in Indonesia and Malaysia. China’s beef patty supplier Husi supplies its products mainly for the Northern China region (Hong Kong Commercial Daily, 2011).

Keystone plans to build its first further processing facility in Indonesia in 2014. Although it will focus on poultry products, beef products will also be produced to supply Asia regions. This will be a potential country from which Hong Kong McDonald’s imports its processed beef patties (Beef Central, 2013). 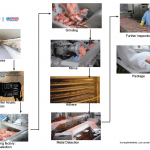 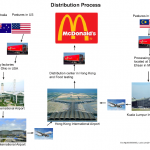 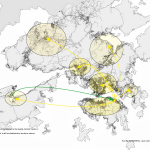 Consumption Process
Upon the arrival of the patties in Hong Kong, samples will be taken from the cargo to a quality-­‐testing centre in North Point. The samples of beef patties are tested along with other ingredients such as burger buns and cheese, to check if the quality is up to standards. If they pass the quality check, the cargo will finally be distributed to various McDonald’s branches in Hong Kong. The goods will arrive in brown cardboard boxes, where they will be

stored in freezers in different branches, and taken out for thawing and cooking when a customer orders a Big Mac. The shelf life of frozen beef patties can be up to 90 days as long as it is stored under the right temperature and packaged appropriately with vacuum packaging (Beef Food Service, 2014).
During our investigation, we found that in order to preserve the beef patties while keeping them flavorful, no preservatives are used to conserve the meat. Instead, freezing is employed to maintain the quality of beef patties. Three different methods of freezing are commonly used in preserving beef patties: blast freezing, mechanical freezing and cryogenic freezing (Beef Food Service, 2014). McDonald’s beef patties are frozen at a temperature of -­‐ 18˚C (McDonald’s Corporation, 2014). For the photo diary, we investigated different types of freezers found in supermarkets. Similar to the processed foods while they are in transit, goods arriving at their destination still do not require much tending and care. They are just stored in freezers until they have to be taken out to thaw. Occasionally, a staff might do a routine check-­‐up to see if any of the frozen food has gone bad or if the equipment is working at optimum levels. Freezing food has been a great advantage in terms of technological advancements. We can now enjoy food that is out of season, as well as keep products from deteriorating by freezing them before they become ripe. The process has given our food the ability to travel greater and longer miles, improving our quality of life.
On the other hand, it has also given us a sense of illusion that we are more connected to our food. In truth, we have handed over the process of handling our food to societies and systems that are distanced from us. However, frozen food has indeed revolutionized our food systems, and also affected the products we consume, as it has given us a far wider category and more choices for us to choose from. 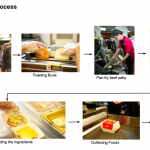 Waste Process
During the processing of beef patties, various wastes are created. From the initial process at the slaughterhouse, waste is created from bones, skin, suet, offal, hooves and horns from the remains of the cow. These “leftovers” can be used for manufacturing other products,

such as soap made from suet and animal feed made from mineral salts, which are extracted from the beef and bones (Marfrig Global Foods, 2014). The deboned meat is then sent for further processing to be ground and minced for the production of beef patties.

During the quality inspection, some beef patties will fail to meet the standards, as some may contain metal fragments or have deteriorated. These waste products will be used for the production of fuel.

In addition, waste will also be created during the production and consumption of the Big Mac. Wastewaters that result from the production process of beef patties are converted to floating sludge by utilizing a flotation system. The sludge is then used as an alternative fuel to generate steam (McDonald’s Corporation, 2014). Used cooking oil that was used for frying the beef patties is recycled to biodiesel, which is used for fuel in delivery trucks. Food leftovers will also be transported to facilities, which produce energy from waste. The energy can then be used to heat local buildings. However, a lot of food waste also goes to local landfills, and this is not an ideal situation. In Hong Kong, waste treatment is not efficient, as there is a minor incentive for consumers and support from the government. In the long run, landfills will ultimately be filled up, creating a damaging situation for the eco-­‐system and society. In 2007, Hong Kong McDonald’s announced the “Waste Recycling Program”, which uses earthworms to turn organic wastes into organic fertilizers. This can benefit organic farming, creating a harmonious cycle and relieves the pressure on local landfills (McDonald’s Corporation, 2007). 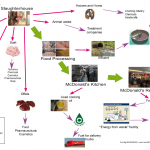 Conclusion
This investigation has revealed that Hong Kong McDonald’s does not produce its beef patties for the Big Mac locally. Instead, it has chosen to import processed frozen beef patties from overseas, and to transport them to Hong Kong by plane. During the production and consumption of beef patties, and to an extent the Big Mac, waste is created. As Hong Kong McDonald’s deals with consumption directly, it has engaged in corporate social responsibility by participating in a waste recycle program, which helps relieve pressure on landfills. However, pollution is still created through the process of transportation as well as processing.