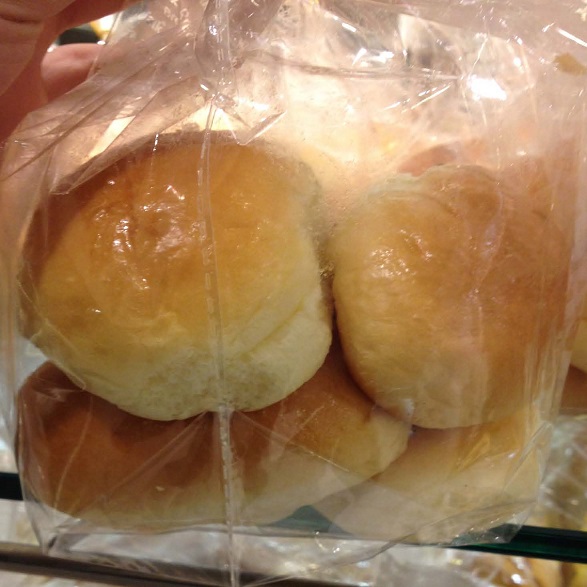 1. Introduction
The Big Mac Index shows that the food prices of McDonald’s in Hong Kong are almost the cheapest among all McDonald’s restaurants around the globe. There are a lot of factors that could explain why Big Macs in Hong Kong are sold at lower prices, for example, the differences in tax policies and currencies in different countries, nutritional values, weights and sizes of Big Mac in different places. Instead of looking into policies and currencies, this project investigates the food network of Big Macs and traces back from its consumption to its production to find the reason of lower price and learn the system of McDonald’s in bringing raw materials from foreign countries to finished goods in Hong Kong. The following essay particularly focuses on the food network of the bread buns of Big Macs. 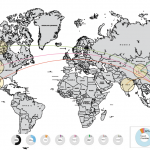 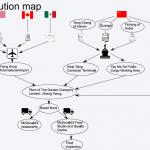 2.2 Regional
The regional map of a selected part of Asia and its surrounding regions shows the locations and quantities of import of the Big Mac bread bun’s main ingredients. For instance, flour is obtained from Yong Cheng of Henan, which is renowned as “the city of flour”. 64% of sugar exported from China is produced in Guangxi. In Hong Kong, over 70% of water comes from Dongjiang River. Yeast is imported from Yichang in Hubei.

2.3 Local
The local map of Hong Kong shows the transportation of ingredients from unloading sites to the production site of bread bun. Most of the ingredients are imported either via planes or cargos. Planes transporting ingredients such as butter, sesame seed, salt

and soybean oil are landed at the Hong Kong International Airport. Ingredients such as flour, yeast and sugar are shipped to Kwai Tsing Container Terminals or Yau Ma Tei Public Cargo Working Area. These ingredients are collected by the convoy of lorries and vans of The Garden Company Limited and transported to its factory in Sham Tseng. After production, most of the bread buns will be distributed to the McDonald’s restaurants while around 1% will be delivered to McDonald’s Food Studio and Quality Centre at North Point for food quality inspection.

3. Bread Bun Walkthrough 3.1 Production
Main ingredients of bread buns include enriched flour (bleached wheat flour, malted wheat flour), water, sugar, yeast, salt and soybean oil. Main preservatives or additives of bread buns include ascorbic acid, sorbic acid and sodium propionate. These ingredients are collected from the airport or cargo ports and transported to the plant of The Garden Company Limited in Sham Tseng. The company uses automated machines in bread production and the process of production starts with putting in most of the ingredients into a dough kneading machine and the dough is kneaded at a slow speed at first, then the machine kneads the dough in higher speed. After that, the dough is transported on conveyor belts to a divider which proportioned them according to weight. Smaller dough is then transported to a cone-shaped machine that makes it into a round shape for fermentation process. The dough undergoes primary fermentation for a short period of time. Then it is moved along the conveyor belts to form the proper shape. Next, it goes into the final fermentation in a cabinet with warm temperature and humid air, which are the conditions that allow yeast to work at its optimal capacity. During the fermentation, the bread expands and has significant increase in size. After two sessions of fermentation, bread buns are transported to an oven for baking. The baked bread buns are sent to a cooling tower for gradual cooling and then proceed to other machines for slicing and packing.

3.1.1 The Garden Company Limited
The factory of Garden is large in scale and its location was selected suitably, which is near the coast at a spacious area. The fragrant odor of baking would not be trapped and would not cause pollution to the surroundings. Garden has secured facilities and it is under close surveillance. There are security guards, closed-circuit televisions, barrier gates and iron gates at the entrance of Garden. Besides, Garden has its own convoy of vans and lorries for delivery of products. Having its own convoy helps to ensure food freshness and to enhance sanitary arrangements. Garden pays attention to create a hygienic environment. Its vehicles are cleaned and washed regularly. Also, there are covered rubbish bins and roll-off dumpsters at the dumping area. Workers were found wearing hygiene gloves, hygiene caps and masks when they are handling disposals. Not only do the security, safety and environment of Garden looks excellent on the apparent, but the food quality is also assured. Garden followed the secret recipe from The McDonald’s Corporation to bake the bread buns. Its factory has a fully automated production line which works in 24 hour basis. Having a fully automated production line not only lowers the labor cost, but also allows Garden to have secured product quality. Moreover, it allows efficient mass production in terms of time efficiency, high productivity and product consistency. The quality of products is assured as The Garden Company Limited has been certified with the highly respected ISO9001 accreditation. 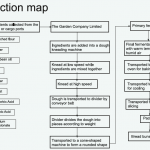 3.2 Distribution
Including preservatives and additives, over 20 ingredients are involved to produce a bread bun. This project particularly looked into the main ingredients of McDonald’s bread bun. Many main ingredients are imported to Hong Kong from its motherland, People’s Republic of China. For instance, 70% of water is transported through pipes from the Dongjiang River of China. The enriched flour, which is a mix of bleached wheat flour and malted barley flour is imported from Yong Cheng of Henan in China. Sugar is from Guangxi and yeast is from Yichang of Hubei. Ingredients from China are imported by cargo ships and arrive at Kwai Tsing Container Terminals or Yau Ma Tei Public Cargo Working Area. Aside from China, some main ingredients are imported from oversea countries. For example, butter, salt, sesame seed and soybean oil are imported from India, Canada, Mexico and United States of America respectively. These ingredients are transported by planes and land at the Hong Kong International Airport. These ingredients are collected by the convoy of lorries and vans of The Garden Company Limited and transported to its factory in Sham Tseng. After production and packaging, most of the bread buns will be distributed to the

McDonald’s restaurants while around 1% will be delivered to McDonald’s Food Studio and Quality Centre at North Point for food quality inspection.

3.3 Consumption
After bread buns are delivered to McDonald’s restaurants, they are not consumed immediately. Most of the time, the bread buns are stored properly on food shelves. When there are customer orders, the bread buns are taken out from shelves and are made into Big Macs. The Big Macs are purchased and eaten. They are either fully or partially consumed. If the whole bread is eaten, the consumer absorbs roughly 200g calories, 6g protein, 3.5g fat and 37g carbohydrates from the bread bun. Otherwise, the leftovers of the Big Mac will be discarded. 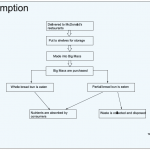 3.4 Waste
Many wastes are produced along different stages of the food network of the bread buns, namely from production to distribution and consumption. Firstly, in production stage, wastes such as burnt bread buns, waste water and oil, unused ingredients and bread crumbs may be produced during baking process. Also, non-reusable sacks, plastic bags, bottles, cardboard boxes and tins that are used to pack raw ingredients of bread buns become wastes. Secondly, in distribution stage, wastes are mainly plastic bags and containers used for packaging bread buns. Lastly, in consumption stage, wastes include uneaten bread buns and the non-reusable packaging. While most of the wastes are collected and dumped to landfills, some might be thrown away to recycling facilities. Waste water and oil are treated in sewage treatment facilities. 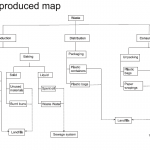 4. Conclusion
The explanation for the low prices of products in Hong Kong’s McDonald’s is complicated and there is hardly a sole reason. This essay specifically looked into the food network of bread buns of Big Macs. Most of the ingredients are imported from China, which implies a lower prime cost. Furthermore, the production line of bread buns is local and fully automated, which reduces labour cost. Moreover, the Big Mac size is comparatively smaller in Hong Kong than in other places such as America. Therefore, the Big Mac is correspondingly cheaper.

This project finds out a few possibilities for Hong Kong McDonald’s low prices. Yet, it is rather considered more important that this project traces the Big Mac from consumption and disposal to production and distribution and allows articulation of the relation between local and global food systems through analysis.