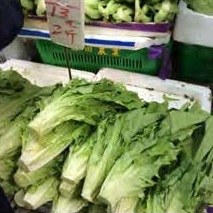 The McDonald’s Big Mac Lettuce, Pickles and Onions and Their Food Networks

McDonald’s Big Mac, the triumphant food item sold to nearly all places on Earth, is indeed an icon of the globalized company. Seemingly homogeneous, the production lines of Big Mac in different parts of the world are in fact quite different. How the bits and pieces of ingredients of Big Mac eventually come together to become one hamburger is such a complicated story. If we dig into the story a bit, however, we will be delighted to find out reasons for things unique to the Big Mac in certain places. 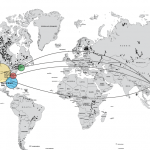 The Big Mac in Hong Kong is known to be the cheapest in the world. The lettuce, pickles and onions used in it might tell a bit of the reason why. Looking at how a multinational corporation like McDonald’s gathers its ingredients systematically for production shall also reveal how they sustain a profitable business in a big city like Hong Kong. 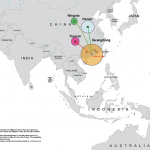 The production of these vegetables can be traced all the way back to farmlands in the US and Mainland China. The pickles are made from cucumbers grown in the US. After these fresh cucumbers are picked, they are processed in food factories. Only cucumbers of the right sizes are chosen, and they are washed before being put into a specially made solution of salt and vinegar. This preservation process lasts for around 8 weeks. Afterwards, they go through quality checks before being packaged. 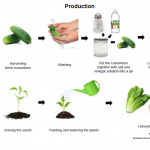 Lettuce and onions are grown in farmlands in China, mostly in the Guangdong and Ningxia regions. Planting these crops in China involves extensive mechanization where nearly all processes in farming are completed by machines. The estimated mechanization of farmlands in China in 2020 is 70%, and currently there are already 13.3 million sets of farm vehicle and 0.743 million sets of combine harvester (Gao, n.d.). The result of that is the extremely low cost of farming and the huge amount of harvest with the minimal input of manpower. With the seeds, fertilisers and some pesticides, the entire farming procedure can already be completed, as machines will do the work like irrigation and fertilization regularly. The very cheap vegetables from Mainland China reduce McDonald’s cost of a Big Mac tremendously, as the price of vegetables in China is kept low compared to other major food producers. In 2010, the food price inflation in China was only 8% while that in Russia was nearly 15% (World Bank, 2011).

After the pickles are packaged and the lettuce and onions are harvested, they are transported to Hong Kong quickly. The lettuce and onions picked from the farmlands come to Hong Kong by trucks through China’s main highways, arriving within 3 days. The lettuce and onions pass through Lo Wu and get to Man Kam To for the import checks. This has been the route of import on land for many years. The standard procedures include checks for dangerous items in the lorries and unreported items subject to tax. The next stop is the Cheung Sha Wan Wholesale Market where the vegetables are further distributed to different retailers, and also to McDonald’s supplier for processing.

Pickles take a quite different route on sea. They are transported out of the US in big ports like the Port of Boston and Port of Charleston by sea cargo. It is the major means of transportation used by exporters as it is much cheaper than air cargo, resulting in lower retail price and lower cost for Mc Donald’s. After arriving at the Kwai Chung Container Terminal in Hong Kong, and going through similar checks as the lettuce and onion, things get interesting to see. The unloaded containers are distributed and some of them are reloaded to barges and dumb steel lighters. They then travel to different Cargo Working Areas in Hong Kong before the containers are loaded onto trucks and transported to McDonald’s processing centre. This cuts cost extensively as Hong Kong’s highways and tunnels are expensive to use. The average price of tunnels and highways for heavy trucks is around HKD 80 where in some cases, the price is more than HKD 100 (Transport Department, 2014). Utilising sea transport even after arriving in Hong Kong help avoid these heavy tolls and hence reduce the cost of these ingredients.

This midstream operation is the highlight of the distribution process. Sea cargo in Hong Kong in fact has a long history. Surrounded by sea, Hong Kong used to have many sea cargo loading areas. Coming to the recent century, although not many of them are still in use with the completion of the huge Kwai Chung Container Terminal, Hong Kong still has the unique strength of easy sea transport to different districts, allowing businesses here to enjoy lower transportation cost than other ports. This is another clue to the good Big Mac price. 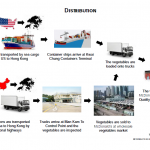 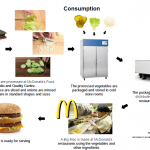 With customer finished their Big Mac, waste are disposed in McDonald’s going through waste separation into plastic waste, paper waste and organic waste. Plastic waste including the foam boxes and paper waste like the paper bags would be transported to the landfills directly while the organic wastes would go to either bio-waste cycling centres for reprocessing or earthworm recycling system where they would be turned into organic fertilizer for organic farming. 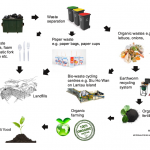 Measuring the cost effectiveness behind, McDonald’s transports ingredients all around the globe attempting to make the cheapest but qualified Big Mac in Hong Kong. With different origins and transportation method, it seems that Hong Kong, as a business centre in the world owns a transportation network in favour of businessman. But paying a cheaper price for Big Mac, the carbon foot print left behind is another story worth discussion.