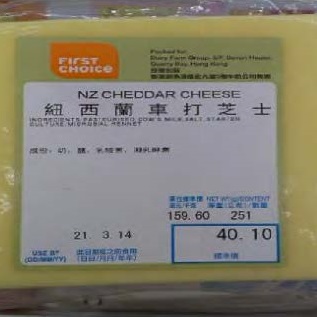 McDonald’s is the world’s largest chain of hamburger fast food restaurant. Every successful corporation has their own logo or icon. Big Mac is one of McDonald’s signature products. It is sold worldwide and people even use it as an index to measure the purchasing power of a country. Big Mac is made of beef patties, iceberg lettuce, pickles, onions, a special sauce, bun and cheese. Different ingredients match to give a delicious taste and none of them is dispensable. For the cheese, it makes the burger smell nice and more savory. 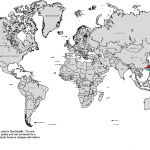 Everyone should have tried cheese before but if we pay attention to the cheese in Big Mac, we will see there are some differences comparing to those we buy in the markets. In this article, we will investigate the cheese in Big Mac by looking closely to the production, distribution, consumption and waste handling processes. 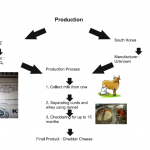 According to Jeff who is a trainer in MacDonald, cheese used in Big Mac is produced by two manufacturers. The first one is called Fonterra Limited. The factory is located at 9 Princes St. Auckland, 1010 New Zealand. To begin with, the manufacturer ordered milk from farms in New Zealand. The farm collected milk from cows and transported a bulk of milk to the factory. After the factory got the milk, it started the following cheese production processes:
1) Workers put the milk into a mixing machine.
2) The machine mixed ingredients such as salt, water, emulsifier and coloring with the milk.
3) The mixture went to a purifying process.
4) A machine would separate curds and whey by using rennet in order to get curds which could be easily solidified.
5) The selected curds would be cheddared for up to 15 months.
6) The cheddared curds would be poured to moulds and formed the shape of a big cheese.
7) Moulds stored in refrigerators.
8) The curds solidified to become cheese.
9) The cheese would pass through a slicing machine.
10) At last, all sliced cheddar cheese will be packaged in boxes.
The second manufacturer is located in South Korea. With limited information, we do not know the name and the exact location of the manufacturer but we deduced

that the production processes are similar to those in Fonterra Limited.
In addition, McDonalds purchases Auckland cheese to South Korea cheese in a ratio of 7:3. Jeff said cheese from Auckland has higher quality than that from South Korea. He added that the higher quality cheese can be stored for a longer time than those with lower quality. 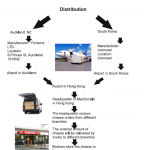 The distribution process is simpler than the production process. After the cheese is packed into boxes, they will be transported to Auckland Airport and one of the airports in South Korea correspondingly. The cheese will be loaded to cargo airliners and transported to different countries including Hong Kong.
In Hong Kong International Airport, staff unloads the cheese boxes to vans or trucks of McDonald’s. The vehicles transport the cheese to the headquarters of McDonald’s which is deduced to be located in North Point and the workers will put the boxes into refrigerator. The headquarters acts as a central distributing center which enhances the distribution efficiency and minimizes errors.
Every time when the headquarters receives cheese orders from MacDonald branches, the storeroom manager records the number and passes the required amount to the delivery teams. The teams will transport the cheese to different braches normally at night or early morning which will not affect the working hours. Finally, workers store the cheese into the ice store room.
The distribution process is relatively simpler and proceeds quickly because the cheese goes bad quickly. Therefore, we must transport the cheese to Hong Kong by air. Moreover, all braches should not order too much cheese each time, otherwise, many unused cheese will be wasted. 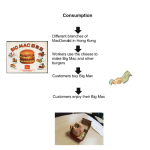 Lots of products in McDonalds need cheese! For example, cheese burger, Big Mac, etc. When a customer orders Big Mac, either eating in the restaurant or take away, worker takes cheese from the ice store room. Then, he puts one cheese on the bottom bun, one more on the upper bun and combines all ingredients. The finished Big Mac will be put in a Big Mac box and sold to the customer at $37.6 per set or
$20.3 each (McDonalds). Big Mac provides several vitamins, carbohydrates, protein and energy. 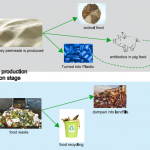 There is waste produced in all of the three processes mentioned above. In the production process, whey permeate is a biodegradable waste induced. As it is

biodegradable, people use it as animal feed. Recently, findings proposed that the whey can be turned into antibiotics in pig feed and plastic. Besides, some damaged packaging material and cheese are some potential waste in production process.
They will be dumped into landfills.
In the distribution process, some of the cheese may deteriorate even though the distribution procedures are gone through as quickly as possible. Due to unstable temperature, change in air pressure and human carelessness, some cheese will become waste. These wastes will be dumped to landfills as bacteria can be easily grown in the decayed cheese.
For waste in the consumption process, the majority comes from food and drinks.
Food wastes will be recycled and turned into organic fertilizer. Another way is dumping the food waste to landfills. Dumping waste into the landfill is not the best way as it will decrease the capacity of the landfill and the transportation processes may lead to pollution. Furthermore, cheese packaging and materials used to handle cheese will become waste as well. Reuse and recycle are possible solutions for these kinds of waste.

Conclusion
Cheese plays an important role as it adds a lot of flavor for Big Mac. Cheese is the spice of a hamburger, without it, the burger becomes tasteless. After looking into the production, distribution, consumption and waste handling processes, we discovered that McDonald’s is adopting a well-designed system. As we can see, McDonald’s does not overlook such a small portion in their overall scale of production, and we understood why McDonald’s becomes one of the most successful enterprises in the world.