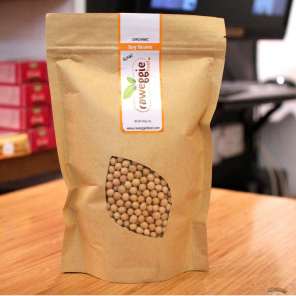 1. Introduction
Soybeans have been cultivated in China since 1100 BC, making them one of the earliest domesticated crops. Today, as a part of a multi-billion industry, soybeans are used in the production of numerous food items both for human and animals consumption, including soy sauce, soymilk, tofu and oil.1 In this report, we will be focusing on the soybeans used specifically in the production of soy sauce in Hong Kong. This report will describe the processes involved in soybean production, distribution and consumption. The waste involved in the production and consumption of soy sauce will also be examined, along with a short account of a case study at a local soy sauce factory. 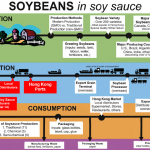 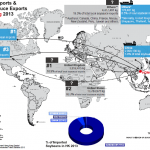 2. Production: Soybean
There are mainly two types of soybean productions: genetically modified (GMO) farming and non- GMO. Modern soybean production primarily involves GMO soybeans, which are developed by seed technology companies such as Monsanto, Syngenta and DuPont. These companies charge soybean growers a premium for their seeds, which have higher nutritional profiles, lower input traits or other value-added traits.

Generally, planting season is between April to July, depending on the geographic region and latitude. Harvesting period is around October to November, depending on soybean varieties, planting dates, local weather and growing regions. Soybeans moisture content should be less than 14%. Once dried to the appropriate moisture content, soybeans will be transferred to storage facilities.

2.1 Major Soybeans Producing Countries
Even though U.S. is the largest soy-producing (and exporting) country, it has lost its dominant position in the global soy production (and trade), especially to Brazil and Argentina in recent years (Figure 1). It is speculated that Brazil will be the number one soy-producing nation. Large supply of fertile land and low labor cost have contributed greatly to Brazil’s soy industry. With further improvement in road and rail infrastructure in the coming years, Brazil’s soy production will continue to expand.

2.2 Major Exporters of Soybeans to Hong Kong
Interestingly, about 91% of the total soybean imports in Hong Kong in 2013 were from Canada, who is not even among the top 5 soybeans producing countries. U.S., which produces about 34% of global soybeans in 2011, only accounted for 2.6% of Hong Kong’s soybean imports (Figure 2).

2.3 Soybeans Varieties
Although there are about 200 soybean varieties, most of which are genetically modified (GMO), most soybean varieties imported in Hong Kong are non-GMO. Currently, the Canadian Special Quality White Hilium (SQWH) grade is the most popular in HK market. Hong Kong customers prefer non-GMO soybeans because of market-driven factors. For instance, many consumers and overseas market buying Hong Kong’s processed products prefer and/or require non-GMO soybeans. These soybeans are charged at premium, especially since they require special storage and handling different from conventional soybeans. 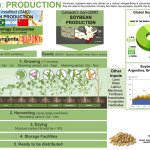 3. Distribution
A main factor in deciding where to sell soybeans (or any other crops) is the cost of delivering them into a market outlet, which depends on the locations and transportation costs that are continuing to increase. Today, more soybean growers are progressively selling directly to buyers in the international market, bypassing the grain trading export companies. Growers may have contracts with exporters directly.2 In Hong Kong, many international trading companies, like Dah Chong Hong Holidings Ltd. and Ng Wah International Development Ltd. contact (large-scale) Canadian growers directly for their non-GMO soybeans. 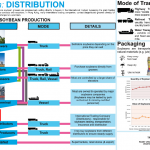 3.1 Handling & Transportation
Infrastructure connects soybean growers to overseas customers. In U.S., it is a common practice for growers to transfer their soybeans to grain elevators via trucks, where soybeans might be combined with soybeans from other farms. Soybeans are then transferred to export grain terminals using trucks, rails or barges. These terminals have the appropriate facilities to transfer soybeans received from rails or barges onto a Panamaz vessel (of 55,000MT capacity) for the international market.

3.2 Transportation Cost
Transportation costs are not fixed. Based on supply and demand, rail and barge/vessel freight rates may fluctuate, sometimes widely. Compared to rail and truck (which is the fastest and most flexible, but most expensive), vessel’s variable costs of fuel, power, labour and fixed assets are the least per ton-mile. However, with costs for vessel ranging from USD10,000-20,000/day, the time a vessel spends waiting in line (due to congestion) can be very expensive.

3.3 International Trading Company (Distributor)
Once the soybeans reached Hong Kong, the buyers, who are normally international trading companies (distributors) will be take over. They are responsible for testing the soybeans, transportation costs, insurance for the product, the punctuality of delivery and distributing soybeans to Hong Kong markets (e.g. food processors, supermarkets, small shops).

3.4 Local Soy Sauce Producers
Local soy sauce producers buy their soybeans from these distributors who provide shipping services by trucks. Most local soy sauce producers use the Canadian non-GMO soybeans, because of their high quality. Although most of them are small scales producers, they buy their soybeans from various different distributors to ensure steady supply of soybeans. They might then sell this finished soy sauce products directly to Hong Kong customers through supermarkets, retail stores and restaurants, or through distributors, who can distribute their products both to local and overseas markets (for export).

4. Consumption: Using Soybeans in Soy Sauce
Roughly, only about 6% of the world’s soybeans are used directly as human food.4 Soybeans are used as the main ingredients in the production of many Asian foods, particularly in soy sauce. Soy sauce is a salty dark brown, all-purpose liquid seasoning. Many variety exists in different parts of the worlds, like China, Japan, Indonesia and including Hong Kong. The variation is obtained from different raw ingredients used and methods of preparation.9 Consumers in Hong Kong can buy bottles of soy sauce at supermarkets, specialty stores, official stores, small shops and restaurants. The normal price of standard size of soy sauce is around HK$15-40. 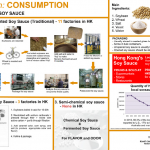 4.1 Production of Soy Sauce
There are three ways to produce soy sauce: traditional, chemical and semi-chemical. In Hong Kong, there are 11 factories that are using traditional method, 3 factories that are using chemical method and none using the semi-chemical method. Traditional method is using fermentation. First, they make ‘Koji’ with boiled soybeans, roasted wheat and yeasts. Then salt and water are added to make ‘Moromi’ before being fermented for 6-12 months. Pressing and extraction of soy sauce follows. Then soy sauce will be pasteurized and bottled. Chemical soy sauce is produced by mixing boiled soybeans and protein mixture. Caramel color, corn syrup and salt are normally added to enhance color and flavor. Semi-chemical soy sauce is made by mixing both chemical
soy sauce and fermented soy sauce for better flavor and odor.

5. Waste
Waste management in soy sauce production and consumption is generally efficient. In soy sauce production, since most of the by-products/waste is organic, they thus can be utilized and recycled to produce other useful products. Wastes from raw materials are given to animals as feed or fertilizer. When pressing soy sauce, soy sauce cake and soy sauce oil are created as byproduct and those are also used animal feed, fuel and stationery. During the process of packaging, leftovers of materials are used as paper. After the production of soy sauce, the PET bottles of soy sauce are recycled as working cloth or clear holder.11

6. Case Study: Yuen’s Soy Sauce
We visited a traditional soy sauce factory at the outskirt of Yuen Long, called Fu Kee Food Co. or simply Yuan’s. The company was founded by the late Mrs. Tsang Heh-kwan, who passed away last year. Together with her two assistants, the trio handled all aspects of the operation, managing to sell their soy sauce to international markets, like UK, Australia and several Asian countries. Her two assistants helped in the production, bottling, packaging and factory maintenance, which are mostly done by hands.

They used the natural way of fermentation to produce their world’s most expensive soy sauce, which sells for HK$185 in up-scale supermarkets like City’super. Each bottle takes a year to produce, and no additives are added. In fact, their soy sauce are all checked by the laboratories in Europe. It was only in the last 7-8 years that they have done local trade. Unfortunately, with her passing, the soy sauce company will be closed, since she was the only one with the required knowledge to run the company and produce such quality soy sauce. The last batch of Yuen’s soy sauce is now near the “pressing” process. Soon, Yuen’s soy sauce will be an artifact. 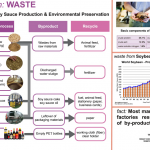