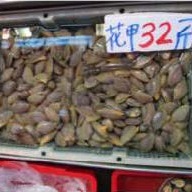 Mollusks in Hong Kong – From None to Edible

Hong Kong a glamorous, international city as many might regard as, for instance, lack the ability to provide herself food; one of the basics for human beings. Therefore, Hong Kong relies heavily on overseas supply. Mollusks, for instance is not an exception. 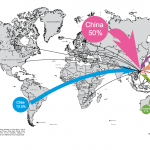 According to the report by the Census and Statistics Department, it is discovered that mollusks are further sub-­‐divided into different categories when it comes to import, like before and after production of the mollusks, mollusks excluding oysters, mollusks and other aquatic invertebrates and etc. After generalizing the import data from these sub-­‐divided categories, it is found that among the overseas import of mollusks, about 50% of the market share in Hong Kong are from Mainland China, 13.5% from Chile, 11.8% from Taiwan and others from countries such as Japan, Australia and Canada. Oysters, another typical and populated kind of mollusks has rather different overseas import sources. Around 29.5% are imported from United States, 16.5% from South Korea, 15.3% from Mainland China, 12.7 from France and others from places such as Japan and Canada. 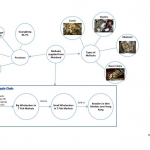 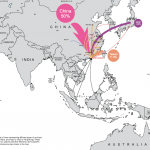 The above statistics show that mollusks imported to Hong Kong is heavily dependent on Mainland China. Hong Kong is always taken as a business hub that many of us have neglected the natural resources and environments around the city. Food is one of the resources that we have neglected. 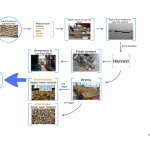 The first one is through the seven fish markets located in Aberdeen, Cheung Sha Wan, Tai Po, Kwun Tong, Sai Kung, Tuen Mun, Shau Kei Wan. This way is mainly for importing mollusks from Mainland China by shipping or by trucks. These fish markets provide rental stores for wholesalers. Indeed, there are usually two to three big wholesalers of each fish market serving as an importer to negotiate the price and the types of mollusks (such as Conch, Abalone, Razor clam, oyster) supplied by exporter. Then, the big wholesalers will re-­‐direct the imported mollusks to the small wholesalers at a price a little bit higher than the negotiated price. All wholesalers (including the small and bigones) will sell imported mollusks to people, including the majority of the retailers in wet markets over Hong Kong.

The second way is through the private wholesalers. Overseas mollusks sellers mainly employ this way by air. After the mollusks arrive at the HK International Airport, the mollusks will be directly transported to the local private retailers by trucks. In other words, the private wholesalers imports just the same amounts of mollusks from the orders and will not have any inventory. This is because the rental fee for a storage space and the equipment needed to store fresh mollusks are expensive. Even with the well-­‐equipped facilities, fresh mollusks will turn bad within a few days. 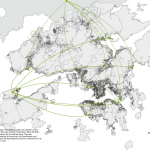 The last method is to import mollusks through chain supermarket, such as AEON, Citysuper and Jusco. These companies have their own supply chain teams, and therefore, they can directly imported food from different suppliers from both overseas and Mainland China by air, trucks or sea. After all, they sell the imported goods directly to end-­‐users through their retail stores.

The quality control processes of mollusks are also of paramount importance. The Food Safety Centre and Food and Environment Hygiene Department carries it out at two periods: (1) After the mollusks arrived Hong Kong, (2) during the Storage process at the retail stores.

After the mollusks passed the checking during the import process, regular quality control is required to keep check the safety and hygiene level of storage condition of the both the retail stores and wholesalers. However, the organization will only carry out the three tests on the water storing the mollusks in the stores. Sample tests will be done unless any complain is received.

For the retailers, maintaining the hygiene level and the freshness of the mollusks is foremost important. In particular, two equipments are essential to help the retailers. The first one is the UV Light System that helps to kill the bacteria in the water storing the mollusks. The second one is the waste collecting and nitrogen supplying machine to help to provide nutrients to mollusks to live, and also to collect their toxic wastes in order to protect the other mollusks from being polluted. 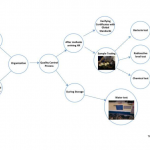 After all the processes, the imported goods or product of local farmers, mollusks can be sold either in a fresh state (not thoroughly cooked) or can be processed before putting on the market.

Fresh mollusks reachable by customers can be found in supermarkets, wet markets or some seafood restaurants. Part of the mollusks sold in supermarkets has been through a series of cleaning and packaging before selling. For example, there are packaged oysters stored in their liquor, frozen half shell mussels, frozen unshelled scallops etc. They are mostly import food from foreign countries. In the fresh food sections inside supermarkets, some freshly caught mollusks are stored in simple polyethene containers. They are not frozen and relatively fresher than the import ones. Customers would purchase pack by pack.

In wet markets and seafood restaurants, most of the mollusks are still alive and soaked in seawater. It is more flexible when purchasing seafood in there. As the mollusks are not packed, customers can decide on the amount they need, unlike in supermarkets where the packing is rigid.

Dried seafood plays an important role in Chinese cuisine, and some of the mollusks are involved as well. Unshelled scallops were made into convoys, which are used in dishes, soup and porridges. In Lau Fau Shan, local residents raise their own oysters and subsequently sundry them to become dried oysters. Their golden colour and depth of flavor make them become one of the fine ingredients in banquets.

Instead of importing mollusks from other countries, why do not we support or develop our local fresh mollusks? Not only are they locally produced; it can very possibly cut down the embodied energy stored in those mollusks. Since transportation and manpower are eliminated in the process. At the site-­‐visit to Lau Fau Shan, an owner of a local oyster farm told us that tradition oysters were raised by the bottom culture method in which rocks or tiles were laid down on the mud to collect larvae of oysters. The collection is time-­‐consuming so the spat would take 4-­‐5 years to grow before putting on the market. Today, the owner will first import medium-­‐sized oysters from Mainland China or Tainan. Then, the raft culture method is adopted by holding oysters in baskets suspended from rafts. The ability for Hong Kong people to lead self-­‐sufficient lives is discovered. This can certainly build stronger bonds among people and also brought Hong Kong to another level of independence. 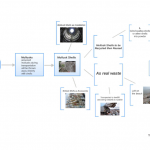