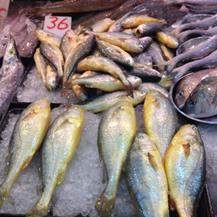 Salt-water fish are fish that spend some of all of their lives in salt water such as oceans or salt lakes. There are a variety of saltwater fish that are eatable. The common ones are Golden Threadfin Bream and Croaker. In this essay, 3 aspects of salt-water fish in Hong Kong will be discussed: Production, Distribution and Consumption.
Problem raised by salt-water fish will also be discussed. 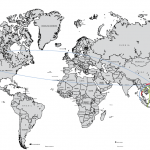 To begin with, everything stems from production. For salt-water fish, the production can be divided into local production and import. In Hong Kong only lived salt-water fish is obtained locally, accounted for 30 per cent of the total fish supply. There are 2 ways of fishing salt-water fish by local producer. Capture fisheries include trawling, long-lining, gill-netting and purse-seining with the majority of the total catch obtained through trawling. Trawling involves pulling a fishing net through the water behind one or more boats. Another method is aquaculture fisheries. The local fishponds are mainly located in the north-western New Territories. Nowadays, around 990 units are operating at 26 legalized fish culture zones. In 2012, amounted to 1299 tonnes of marine fish was produced, which valued at HK$117 million. On the other hand, all kinds of salt-water fish including lived, chilled and frozen ones are imported from different countries and with various proportions. For the lived fish, apart from local fishing fleets, the main sources come from Indonesia, Thailand, Philippines and China. For the chilled fish, they are mainly supplied from Mainland and Norway. The frozen fish are from Mainland and India. All kinds of imported salt-water fish are transported to Hong Kong by planes, shipping or through direct transport, which is suitable for exported fish from China as the geographical barrier is limited during the path. 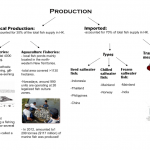 After production, the locally produced and the imported salt-water fish will be distributed to 7 fish wholesale markets. They are located in Aberdeen, Shau Kei Wan, Cheung Sha Wan, Sai Kung, Kwun Tong, Tuen Mun and Tai Po. Retail sellers and large supermarket sellers will go those wholesale markets and choose their wanted species. Afterwards, the fishes they picked will be transported to their stalls, which are in wet markets, supermarkets or factories. Retail sellers usually set up their stalls in wet markets. Since there are 7 wholesale markets located in different parts of Hong Kong, fish sellers will go to the nearby one. The selling prices are set by individual sellers base on the market price. The large supermarket chain stores will first sent their picked fishes to their private central fish centres for division, packaging, disinfection and allocation. Then fishes will be sent to the corresponding supermarkets. Another place where fishes are transported to are factories. Some fishes will be selected by producers who work on further food processing such as fish snacks, canned food etc. Eventually, after the above procedures, fishes or fish products will be purchased by consumers. 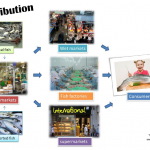 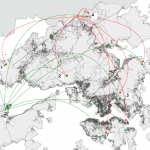 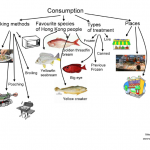 These three procedures repeat every day. However, when fishermen catch fish, when the fish products are transported to and around Hong Kong and when the fish are processed, a large amount of wastes are produced. People involved are usually unaware of the pollution caused.

First of all, in production, local fishermen usually feed the fishes with modified fish pellets and drugs which boost the pace of growth and quality of fish. Also, to eliminate the growth of fungi and harmful insects in fish farms, they will add fungicides and pesticides. Although these chemical products can effectively achieve the fishermen’s purpose, they will directly discharged to seas or oceans when the pond water is changed. At that time, the uneaten drugs and pellets as well as the chemicals will decompose and pollute the water. In the worst case scenario, other marine creatures will be poisoned, leading to death. Eatable salt-water fish in that area cannot be eaten either.

Secondly, in the process of transportation and selling, foam boxes are largely used to pack the fish. It is a common knowledge that foam boxes take a very long period to decompose. After the fish are unpacked, the boxes will be thrown. As a result, land pollution is caused. Moreover, the blood water from drained fish storage tanks and dirty water from washing and cleaning of the fish stalls will also be directly discharge to oceans and seas. Therefore, water pollution is worse.

What is more, unwanted parts of fish are not always able to be re-used. Fish skins and heads can be cooked as food while fish carcasses can be used in bioactive peptides in Securefish project. However, parts like viscera and scales are unable to cooked or used. They will be directly discharged as well.

As what is mentioned, numerous wastes are produced in production. There are still much wastes caused in another two stages like the packaging materials and the uneaten parts of consumers. As a responsible citizen, we should be more aware of the waste problem caused while we are enjoying our delicious meals. Apart from it, fish producers should also pay attention to the pollution caused. The authority is suggested to set up regulations or subsidy on developing technology on the discharge of dirty water and any physical objects related to fish production. It is believed that with concerted effort, pollution and wastes caused by fishing can be alleviated and people can enjoy the fish delicacies.