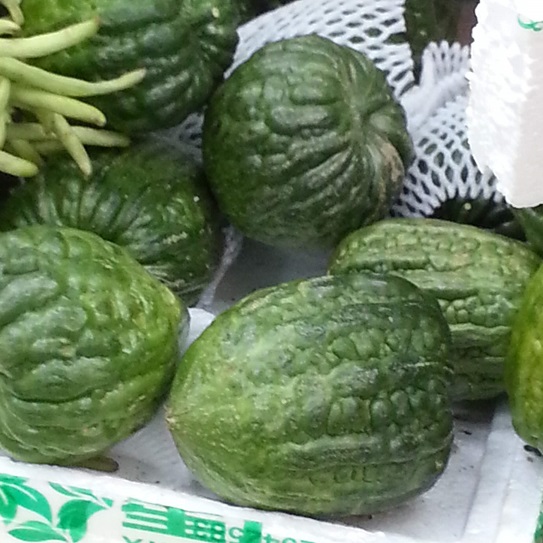 Introduction
In the Chinese community, gourd is commonly found on dining tables during summer time. Among the multiple types of Chinese gourds available in Hong Kong, this essay will focus on tracking the supply chain of bitter gourds and winter melons. According to the different stages of the supply chain namely production, distribution, consumption and disposal, unique characteristics of these two species are to be discussed as follows. 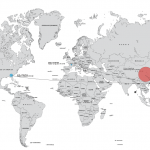 Production
Bitter gourds and winter melons are very different in their sizes and appearances. However, the fact that both of these Chinese gourds have India as their origins indicates the presence of similarities between the two species.1 One of their common features is the input requirements in the production stage.

Like any other kinds of vegetables, climate, water and soil are three major natural elements determining the production of bitter gourds and winter melons. In terms of the climatic condition, both species require warm to hot temperature. It is why both of them are grown from late spring to summer when abundant sunshine is available. It also explains why they are more easily accessed during summer months. For the input of water, careful management of irrigation and drainage is essential for gourds or the gourds would easily rot with excessive water supply. Yet, the required condition of soil for growing bitter gourds and winter melons is less particular. Soil types ranging from sand to silt are suitable for growing these two kinds of melons.2

These requirements on natural resources have certain implications to the location of production of the two species. Since the subtropical climate in Southern China and Hong Kong fulfils the requirements of growing bitter gourds and winter melons, large production is found in these two locations. The proximity to Hong Kong also allows provinces like Guangdong in Southern China to become the major source of these two species for Hong Kong. According to the statistics from the Hong Kong Agriculture, Fisheries and Conservation Department, the amount of import of these gourds from the Mainland accounts for about 80% of the total supply in the local market. As for the local production, farms are concentrated in the New Territories from which produce mainly supply for nearby districts. Some of these local farms implement organic farming methods and contribute to the production of organic gourds to the local community. 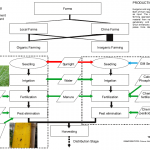 Distribution
There are two main destinations of the distribution of gourds, namely supermarket stores and wet markets.

For gourds that are eventually sent to supermarkets, they are first transported from mainland farms to quality screening centre monitored by the supermarket chain corporations. Then, the gourds are temporarily stored in warehouses for further transport to supermarket stores. Packaging is done in stores before being sold to customers.

For gourds sold in wet markets, they are first transported to Man Kam To Control Point for screening ministered by the government, then transited to the three wholesale markets in Hong Kong, which are Cheung Sha Wan Wholesale Market, Western Wholesale Market and North District Temporary Wholesale Market for Agricultural Products, from around 9 p.m. to 3 a.m. every day. 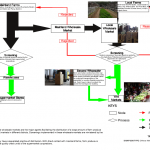 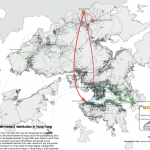 Being the major source of gourds for the general public, wet markets and supermarkets have different packaging procedures of the gourds prior sale. In wet markets, little pre-packaging is performed on both types of gourds. In other words, gourds are weighed, cut and packed according to customers’ requests. On the contrary, pre-packaging is a common practice found in supermarkets. Packs of bitter gourds and pre-sliced winter melons are usually readily accessible in supermarkets.

With regards to the consumers, they can be classified into two main groups according to their financial background since it directly affects the affordability of the produce.

Gourds that are produced and transported from the Mainland are sold at lower prices, allowing easy access by the general public. Local production, especially organically grown produces are sold at a much higher price, usually around three to five times of non-organic produces. As a result, middle-class and upper-class with better financial ability and higher demand in quality of food are the major consumers of organic gourds. 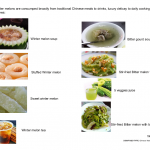 Disposal
In recent years, the issue of waste management has drawn public attention and aroused serious discussions. Tracing all the way back to the beginning of the production chain of bitter gourds and winter melons, different ways of waste disposal are identified among which some are highly recommendable while others need enhancements.

At the production stage, recycling of materials is found to be more readily implementable. Fallen leaves, climbers of gourds and rotted produce are examples of materials in farms that can be recycled through composting. By turning the waste into compost, this process redirects resources from the end of a production chain back to the start of it, thus avoids wastage of materials.

Compared with this, the waste management method adopted at the distribution and consumption stage in Hong Kong is less organized. Since intactness is especially important for the sale of gourds like bitter gourds and winter melons, even slightly crushed gourds are found to be disposed in wholesale and local markets. For bitter gourds which are relatively small in size, the entire gourd would be discarded. But since winter melons are much larger, vendors mostly cut out the damaged parts and keep the remaining parts for sale. Without convenient access to recycling facilities of

food in markets, direct disposal becomes the most efficient method of handling the damaged gourds.

In order to reduce food wastage especially in the distribution and consumption stages, there are increasing cooperation between supermarket chains, wet market and non-government organizations. There are several organizations carrying gourds recycle project for local community, such as Food Angle, Food Grace, Foodlink Foundation and People Service centre.

As mentioned, intactness is particularly important for gourds and slightly damaged ones are very likely to be disposed. So, some less damaged ones are collected from wet markets and supermarket chains by these organizations in the night for redistribution. Most of the beneficiaries are solitary elderly from low income class who may otherwise skip lunches and dinners due to the lack of money. As for the more seriously damaged gourds and the rotten produce collected in wet markets and supermarket stores, they will be composted into organic fertilizers for agriculture in the New Territories. 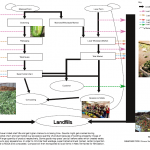 It is found that food wastage in the distribution and consumption stages is not inevitable. In fact, some organizations are already putting effort into tackling with the problem. Their campaigns are effective in alleviating the environmental problems brought by food wastage. By utilizing food waste, it is a resource for the underprivileged in society as well as the agricultural practices in Hong Kong.