The Life-cycle of Tomatoes and Eggplants

The planting time is important for agriculture. Tomato is not resistant to frost, as well as high or low temperature, and the requirement for growth is at an average daily temperature of at least 15oC. Generally we can get the best ones if planting them about 13 days after the last local frost date. The required temperature for eggplant is about the same, but the adaptation to season and weather of eggplant is better than tomato, so it can be planted almost whenever warmer than 15 oC. What’s more, there are also some criteria for soil. The appropriate soil for tomato planting, especially for organic ones, should be rich in organic matter, with less pollution, and at about pH5.6 ~ 7.5. For eggplant, the best soil is moisturized with rich structure of pH 6-7. Besides, growing near beans and other nitrogen-fixing crops, which can repel beetles as well as provide shade and wind protection will be better for eggplants growth. 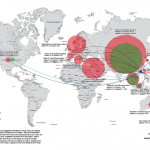 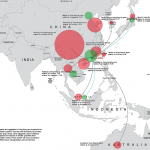 Besides, there are mainly two methods for tomatoes and eggplants planting: open-air planting and planting in facilities, like tents and greenhouses. The using of facilities can efficiently reduce the damage of tomatoes from wind and rain, which otherwise may burst, and avoid the pests as well. However, the disadvantage is a relatively high temperature inside the facilities, where shadow net and indoor air circulation system will be needed to lower the temperature and ventilation. Open- air planting method needs fewer facilities, which can reduce the planting cost. However, it may pose threats to tomatoes by rain and wind, as well as pests. Therefore, in most cases, the organic planting of tomatoes will use the method with facilities. However, since the scale of agriculture is relatively small in Hong Kong, the majority of locally produced tomatoes are planted by the open-air method, according to a survey among local farmers. Meanwhile, for eggplants, it is better to use the open-air method, because of its need for rich sunshine. Planting with facilities is adopted when it is cold seasons. More importantly, according to a local farmer, there are several tips for planting. Firstly, tomatoes need the supporting system made by hard wattle like bamboos. Secondly, raising seedlings is needed before growing eggplants. Thirdly, both tomatoes and eggplants belong to the nightshade family, so they are prevented from growing near each other to reduce yield loss causing by the attraction of the same kind of pests or diseases. 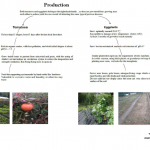 Harvest The time to harvest for tomatoes depends on the ripening color according to species, while eggplants are harvested when their sheen becomes glossy and flesh becomes spongy, remaining finger indentation when pressing the skin. They have to be harvested gently by cutting the stem with knife, otherwise may bruise easily while pruning. Then, they will be transported by trucks to collectors which are centralized nodes and work as a middle person between farmers and first wholesalers in Hong Kong. The collectors, usually foreign wholesalers, receive the tomatoes and eggplants from different farms every day and package them in cartons and sealed polystyrene boxes. Tomatoes imported from Shandong, which are renowned for their beautiful color and shape, are protected by extra paper wrapping. This might help protect the delicate tomatoes and keep them intact for selling at a good price. In contrast, eggplants do not require extra handling procedure, and are stored together in polystyrene boxes for heat insulation to maintain freshness. These packed vegetables can then be delivered to the wholesale markets or warehouses in Hong Kong via different means of transportation. Tomatoes and eggplants from mainland are transported by trucks through Man Kam To, while those from foreign countries are generally delivered by air.

Before distributing to wet markets, majority of the vegetables imported from China, or produced locally and held in plastic trays, are collectively transported to the Vegetable Marketing Organization (VMO) at Cheung Sha Wan. Upon arrival, they will be unloaded and weighed. To ensure the safety and quality of vegetables, samples are taken to the laboratory of VMO for pesticide testing. They should not contain any prohibited pesticides, or the amount of some chemicals could only be present below certain critical levels. While those disqualified will be retrieved for strict quality control, qualified ones will be retained in the distribution chain. Details of each species from the same farm will be recorded on a sales memo with a specific barcode label. They will then be brought to a covered area for price negotiation between farmers and buyers. Samples of the vegetables in boxes are usually displayed for quality assurance and attracting buyers. Following the agreement of a business transaction, terms will be recorded on the corresponding sales memo. After that, vegetables will be extracted and transferred to buyers’ containers. Finally, they will be loaded onto lorries for distributing to wet markets or restaurants for consumption. Supermarkets are different in some ways on transportation and distribution levels. They directly negotiate and import tomatoes and eggplants from farms without passing through other wholesalers in imported places. Permitted and appointed farms by the supermarkets exclusively supply these ingredients for them. Harvested tomatoes and eggplants are delivered to Specialized Vegetable Warehouse of the supermarkets, where packaging is done there, in Hong Kong at night by trucks from mainland, or plane from other countries. Laboratory tests are conducted overnight to examine their pesticide standard. They are then allocated to different branch stores by trucks in the early morning. Every transportation nodes are equipped with refrigerators which keep the tomatoes and eggplants fresh. Although the handling process of supermarkets appears more comprehensive, marked price of tomatoes and eggplants are comparable to those in wet market retailers. Most of the household consumes tomatoes and eggplants from supermarkets which share about 80% of consumption of these ingredients. 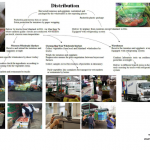 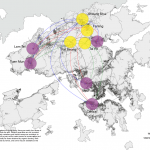 Regarding consumption, selling price of tomatoes and eggplants will depend on their origins and farming methods, as a result of differences in transportation costs and resources for cultivation. For instance, vegetables imported from foreign countries by plane may be sold more expensively than those from China by truck. Those obtained by organic farming will generally be sold at higher prices as well. Marked price for tomatoes and eggplants sold at wet markets will be set for a standard amount, such as a catty, and are stored in room temperature; while those at supermarkets will usually be sold individually or as packages, and some of them are stored with a refrigerating system. Organic tomatoes and eggplants sold in organic shops are generally more expensive than those from supermarkets and wet markets. The techniques and capital of organic farming are indeed similar to that of normal farming. The reason why they are sold at higher prices is probably due to their low yield and small market share in Hong Kong. Besides, cost of dishes at restaurants can vary according to the prices of ingredients included. 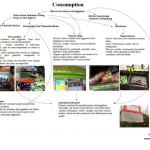 Disposal Supermarkets either throw these unsold ingredients away or donate them to charities. For wet markets, left-over tomatoes and eggplants are vended at lower prices before disposal. The disposed raw and processed residuals of tomatoes and eggplants are mixed with other food waste, accounting for about 70% of the municipal solid waste disposed in landfills. They are collected from the refuse collation points by Food and Environmental Hygiene Department trucks to different refuse transfer stations, which are centralized places for waste processing before dumping into landfills. The vehicles first being weighted their gross on the weightbridge, then they drive to the unloading area and dump the waste into the live-floor system, conveying the refuse to the hydrolyzed oil compacter that takes around 10 minutes per run to compact the refuse into sealed containers by high pressure of oil. Once they are filled, trucks will deliver them to the loading area and settle them onto the vessels by crane for shipment to the nearest landfill. After arriving at the site, trucks are used to deliver the containers uphill to a designated area for dumping. Bacteria will then naturally decompose the food residuals inside the waste and return the essential elements for farming into the environment. A specific route for food waste is collecting them from restaurants, wet markets and shopping malls. They are transported daily by trucks from Environmental Protection Department contractors to the composting plant in Kowloon Bay. They are first pre-treated to sort out the non-biodegradable and inorganic wastes on the sorting table, and the remaining will be mixed by a mixer to increase the surface area to facilitate the fermentation by microorganisms, with cortex and sawdust added to absorb water inside the food waste. The mixed wastes are put into the in-vessel composter, which is a giant roller that rotates very slowly for about 18-20 times every day to release heat with the infusion of oxygen for digestion by microorganisms inside. This process is particularly important to kill all the pathogens present in the food waste to produce clean and premature compost after 10 days. They are discharged out of the composter to pile on curing pads. Through regular tilling and water spraying for 30 days, they can be decomposed completely and converted to mature compost, contributing to vegetable growth in local farms, including tomatoes and eggplants. 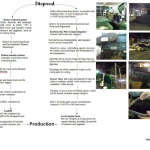 Although it seems that food waste can be sustainably returned to the growth stage to complete a life cycle, only a minimal amount can be transformed into useful materials for farming. Therefore, reducing the generation of enormous food waste is probably one of the most pressing issues that should be targeted in order to feed every individual over the world.