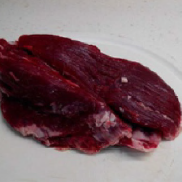 Beef is an essential ingredient in many different dishes. It is the third most widely consumed meat in the world, accounting for around 25% of meat production worldwide, after pork and poultry. Having limited land supply, beef in Hong Kong are all imported from other countries.How does beef come to our mouth from other countries? What pathways has the ingredient gone through?

In Hong Kong, frozen and chilled beef take up 95% and 3% of the total beef consumption respectively while fresh beef take up 2% of Hong Kong’s total beef consumption only. For frozen beef, 51% comes from Brazil and 37% comes from USA. Hong Kong is even the largest importer of Brazilian frozen beef worldwide. For chilled beef, half of our consumption comes from Oceania. 42% comes from Australia while 8% comes from New Zealand. USA and Brazil take up 26% and 11% of Hong Kong’s demand respectively as well. On the other hand, all living cattle are imported from China. About one third (33%) of the imported cattle are from the farms in Mongolia. The rest of them come from Beijing (25%), Hebei (25%), Eastern Provinces (10%), and Southern Provinces (7%).

The shift of beef from fresh to frozen

The insist on fresh ingredients has long been a Chinese tradition. However, the situation has changed in the past decades. According to the statistic of Food and Environmental Hygiene Department and Census and Statistic Department , the number of imported cattle sharply dropped from 190,000 to 19,223 in 2013. At the same time, to supply the need of increasing beef consumption in Hong Kong, the total imported frozen beef has increased in higher speed from 49% in 2003 to 95% in 2013.

Inflation in mainland China and the increase of exchange rate between China and Hong Kong have resulted in the increase of imported cattle price. According to the statistic, the price of a single imported cattle from China has increased from 2,342HKD in 2003 to 22,475HKD in 2013. The imported beef price has been increased by nearly ten time in a decade. The retail beef price in Hong Kong is HK$196 ($25.29) per kilogram in 2013, which is not affordable for lower income level and that caused the decline in demand. In comparison, the price of frozen beef is less than half of the fresh one which is more affordable for restaurants and grassroots.

Another reason is that there is only one licensed supply agent Ng Fung Hong in Hong Kong, which is a Chinese government related sole agent. This company is the only live cattle importer and the company runs the only cattle slaughterhouse in Hong Kong. The monopoly situation makes the market lacks competition and unhealthy. The beef price and also the number of cattle imported are controlled by the company.

To avoid further inflation, the government is trying to give out more licenses so as to bring competition to the market. It is expected that the market sharing of Ng Fung Hong may reduce in the future. The beef traders and government are also figuring out if it is possible to import live cattle from Southeast Asian companies. Hence, in the future, the inflation of fresh beef price is expected to slow down or even the price may drop to a more acceptable price so more people can enjoy fresh beef. 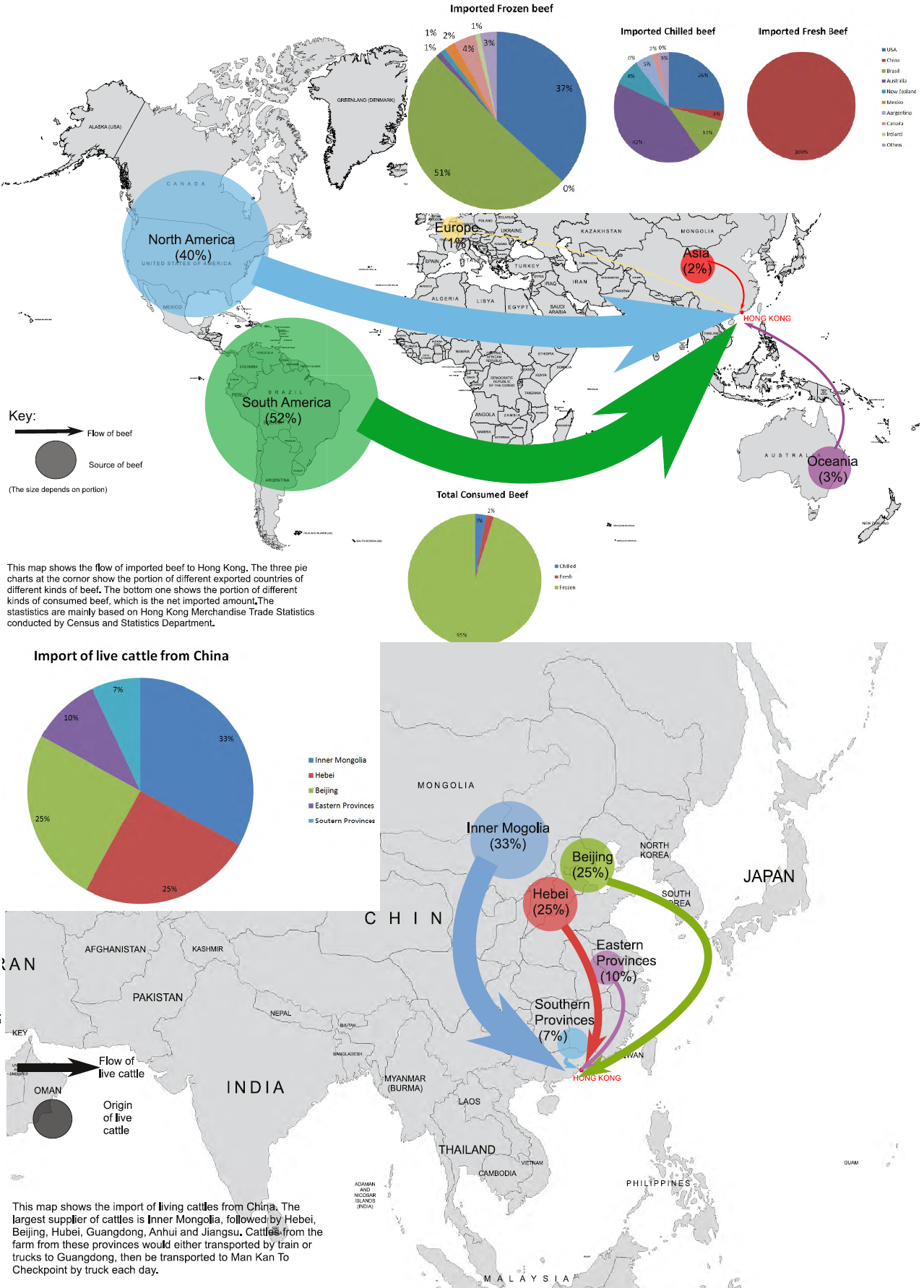 The processes frozen and chilled beef go through are similar. The cow-calf producers will sell their beef to stockers, followed by packers who slaughter the beef into different parts. Freezing and chilling processes also take place there. In the packers, the beef goes through packaging process. For chilled beef, quarters of beef and whole calf are packed in plastic bags and stockinettes; boned beef is wrapped in vacuumed packages and placed in cartons. For frozen beef, similarly, quarters of beef are packed in plastic bags and stockinettes; however, boned beef is wrapped in film instead of vacuumed packages before being placed in cartons.

Then, the beef leaves packers and arrives the inspection center, e.g. USDA Food Safety and Inspection Service in the case of USA, for mandatory inspection and quarantine. The beef can then choose to undergo voluntary grading in governmental departments, e.g. Agricultural Marketing Service under USDA.

After that, foreign beef gets to the ports to be exported by air and sea, while chilled beef from the Mainland, which takes up only 3% of total chilled beef consumption, is transported through trucks. It is worth noting that certain documents have to be presented prior to export. For instance, US beef needs the Certificate for Export and the Meat & Poultry Export Certificate to be exported.

After being sold by cow-calf producer to stokers, the cattle will be put in an isolation field for observations. After that, they will be taken to the inspection area where mandatory inspection is carried out. The cattle will then be feed if they pass the inspection test. In the feeding period, a cow needs to consume 300g of grass and feed in a month. 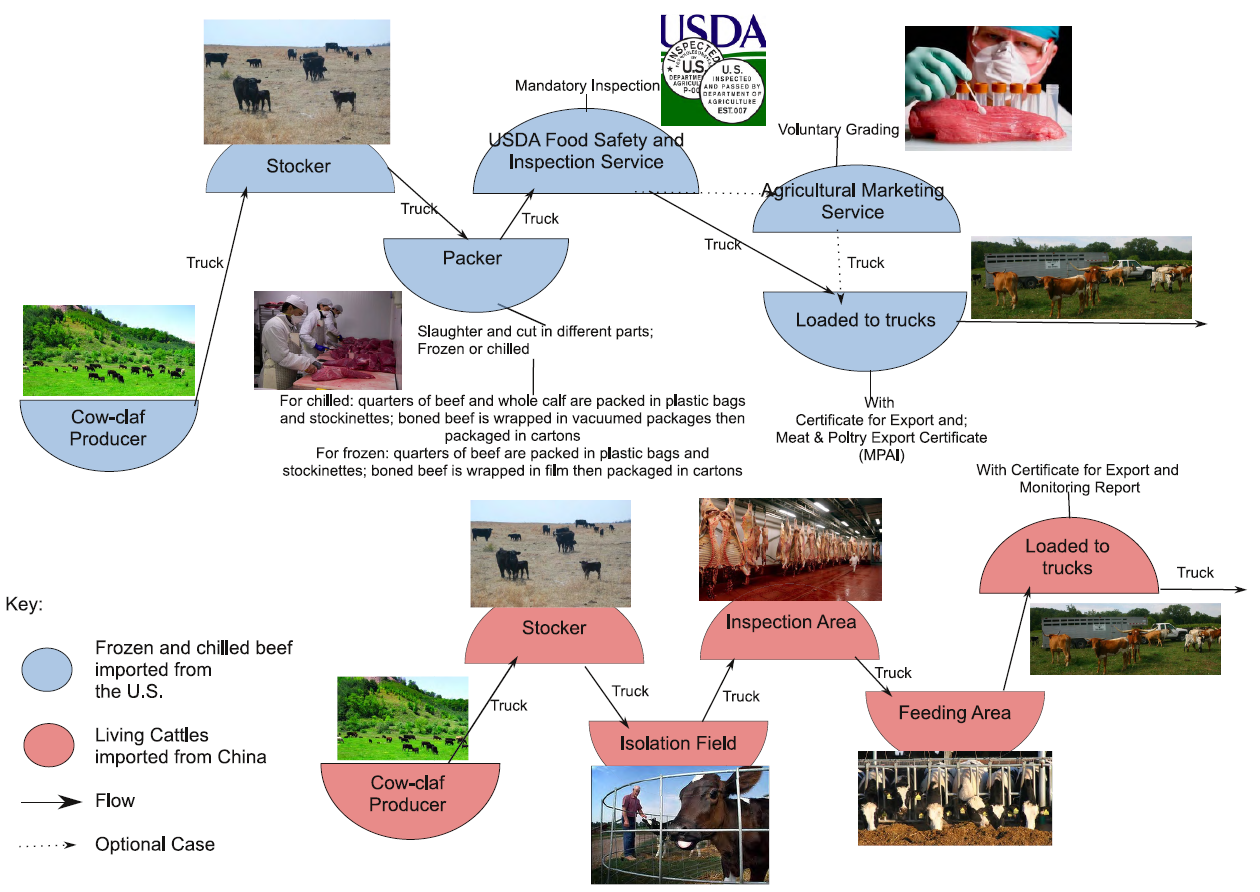 During the transport, chilled beef has to be stored at 0°C-4°C and relative humidity should be kept at 80%-85%. Quarters of beef and whole calf are hooked by their hind legs. Meanwhile, frozen beef is stored at around -18°C and a relative humidity of around 95%. Blood-free condition should also be ensured. Furthermore, inspectors usually use wooden mallets to make sure the beef is hard when loading.

Beef arrives Hong Kong through three major ports: Kwai Chung Cargo Terminal (sea), Hong Kong International Airport (air) and Man Kam To Checkpoint (truck from the Mainland). They will then go to Food and Health Bureau Checkpoints next to the ports, where quarantine and checks on container temperature and microorganism activities are conducted. Sometimes dogs are even sent to investigate if there is any drug hidden in the beef. Inspectors also check the hygiene proof issued by foreign government. Then, they are transported either to food processing factories or directly to frozen meat wholesalers by trucks.

After 10 months of feeding, the cattle would be transported by trucks to the Shenzhen Qing Shui River Fresh Beef Gathering Market. There will be quarantine and inspection carried by the National Health Commission of the People’s Republic of China (PRC) government. The Ng Fung Limited, the largest agency of fresh meat supply in Hong Kong, will also place their order of cattle. The ordered cattle will then arrive the Man Kam To Checkpoint by truck. Further quarantine by the Hong Kong Food and Health Bureau will be done. The hygiene proof issued by mainland government will also be inspected.

After the cattle arrive the Sheung Shui Slaughter House, buyers of Kowloon Love Cattle Trading Company, a subsidiary of Ng Fung Limited, will draw lots to decide the priority of placing orders. The local agencies will then order and pay the cattle according to the weight before they are killed. The cattle will undergo a series of slaughtering processes and being cut into quarter size. The beef are hooked in the meat truck with air-conditioner inside and transported to wet markets for distribution. 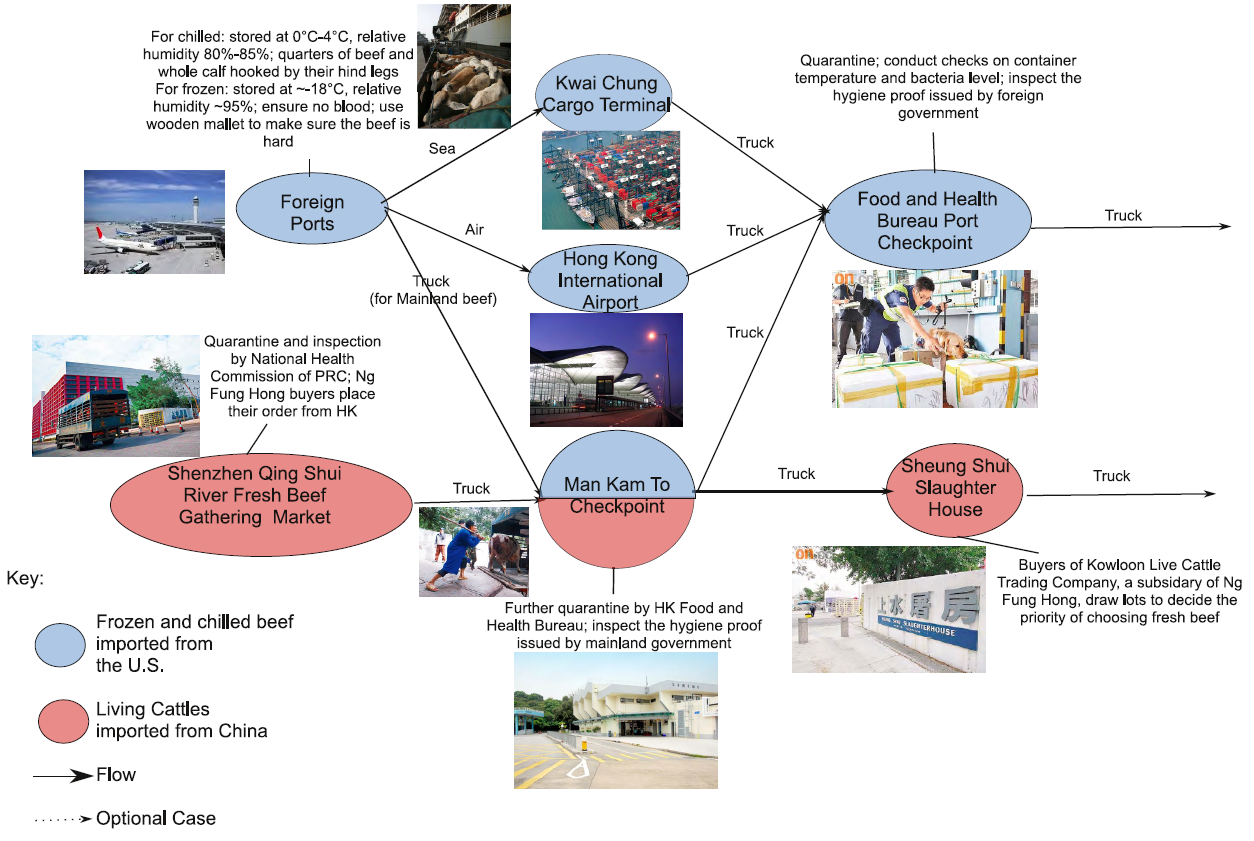 Waste is generated in every step of beef production. Carbon dioxide from transportation and refrigeration is released as greenhouse gas. Methane from cow flatulence faces the same fate most of the time as well, yet it also has the potential to generate energy through combusting it to drive a turbine. Water contaminated in cleaning cows is usually poured into rivers, leading to water pollution. Some will be poured onto the ground and be naturally evaporated. Packaging materials such as cartons and plastic films are either recycled or dumped into landfills. The unwanted parts of cows, including fat, are usually dumped into landfills and be biodegraded. 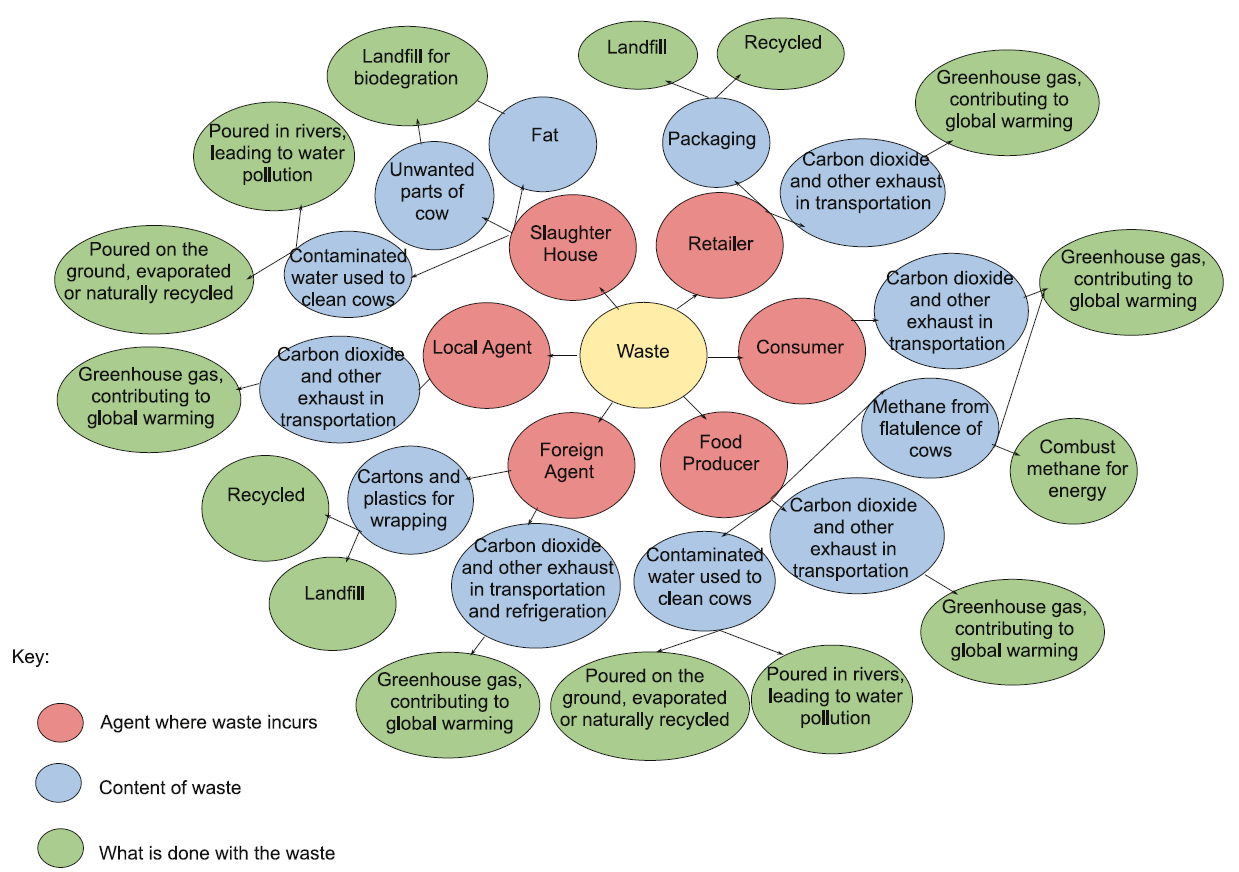