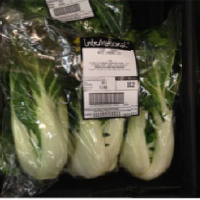 Bok choy is a common vegetable consumed by every Chinese household. It is one of the commercial variants of Chinensis with choy sum and baby bok choy. Cultivated in China since ancient times, bok choy can be found in soups and stir-fries, appetizers and main dishes. Nonetheless, before it is served to fill your appetite, the portion of bok choy we are eating actually involves many more steps than we can imagine. In the following part, more information about the food pathways of bok choy will be provided.

90% bok choy in Hong Kong is mainly from the mainland China and remaining proportion is from local farmland. Major suppliers in China are Weizhou, Kwanming and Ningxia, which take up 32%, 23% and 39% respectively. Although the distance between Ningxia and Hong Kong requires 55-60 hours traveling time, it becomes a major supplier of Hong Kong since 2007. It is because Ningxia owns a lot of natural quality such as high light intensity and long day time for the growing of crops and therefore is able to produce high quality of vegetables for Hong Kong people. Their state quality checking is also tight so the vegetables imported from them can pass the strict Hong Kong standard in Man Kam To Food Monitoring Center. 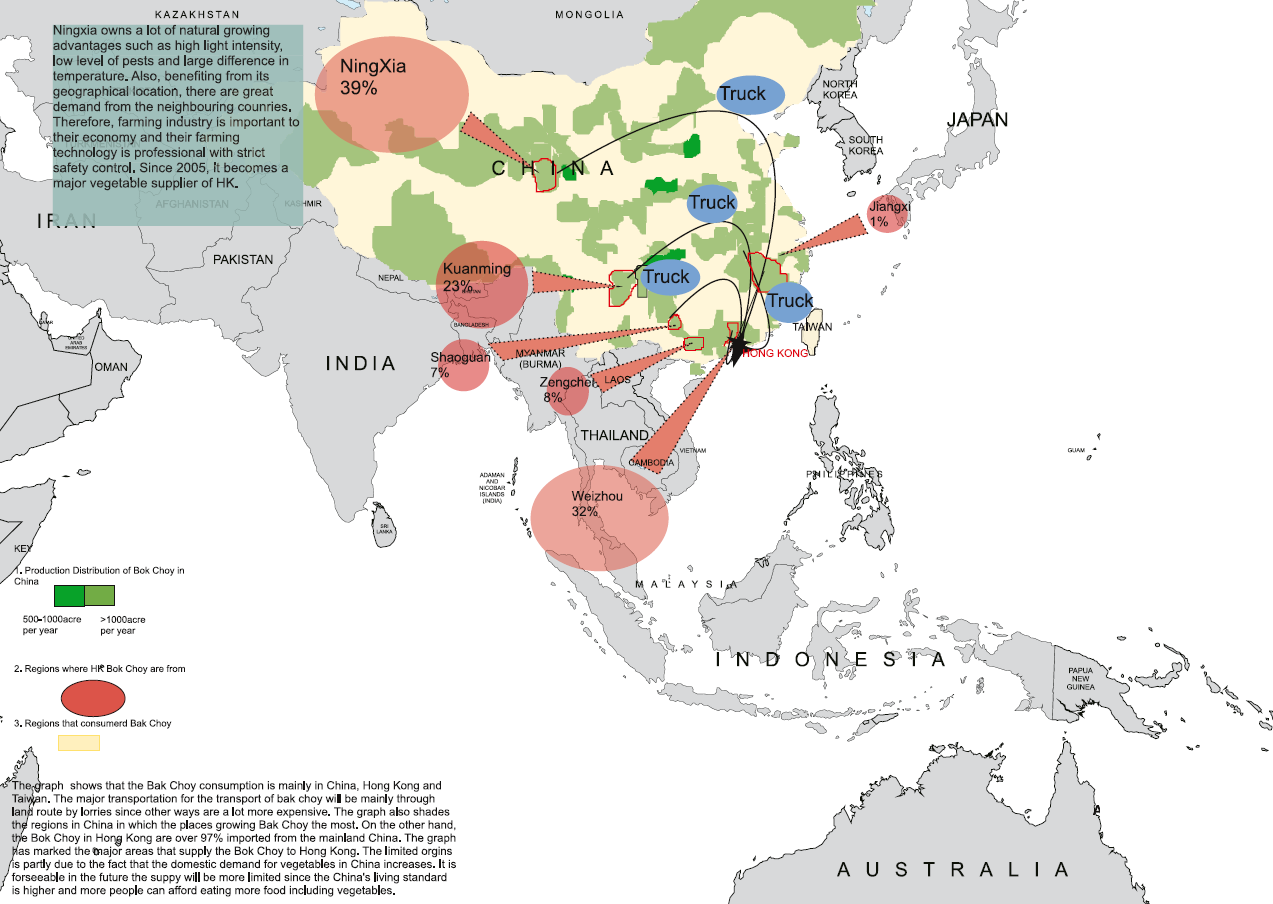 The production process of bok choy made no difference comparing with other vegetables. Ploughing and cultivation of land are necessary to make the land ready for uses. The optimal sowing period of bok choy is in August since it is suitable to grow in a windy and cool environment. Its optimal temperature for growth lies between 18-20 Degree Celsius. The total growing period of bok choy will be around two months.

The growing process of bok choy can be divided into three periods, namely the “seedling period”, the “photosynthetic period” and the “heart packing period”. The most critical point in growing bok choy is that it is necessary to add fertilizers including nitrates, phosphorus and calcium in a suitable amount in different growing stages. The yield and the weight of bok choy greatly depend on the appropriate amount added.

In the seedling period, a small amount of fertilizers is needed to support the growth of the young seedling while in the photosynthetic period, a larger amount of fertilizer should be added. It is the most important period for the growth of the roots and leaves. In the last period, the sufficiently large and most leaves are blocked from receiving the sunlight. This leads to a slow photosynthetic and therefore the growth rate is slow. Farms have to be clearly aware of the application of them to produce a better yield. At the same time, farmers also start to prepare for harvesting their crops. 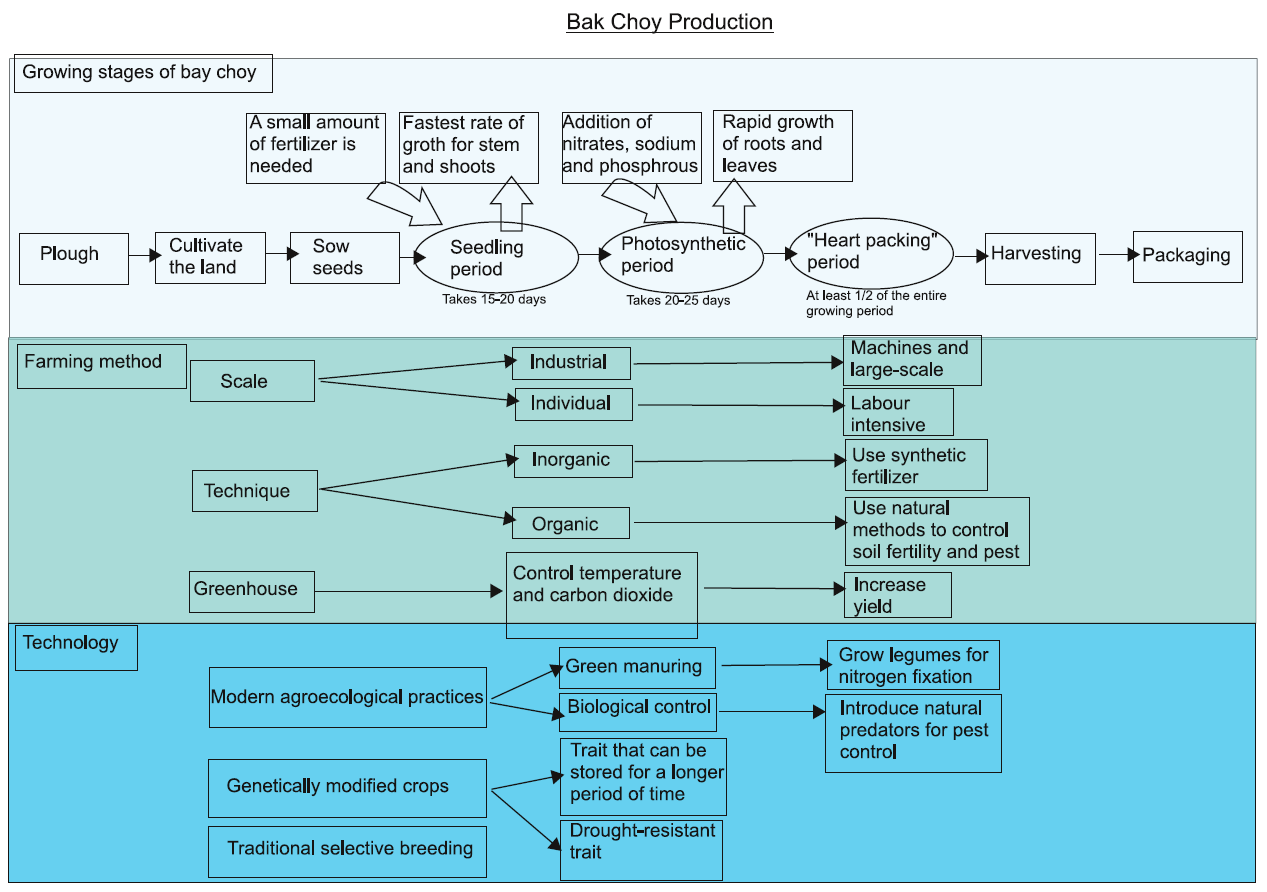 Bok choy from farms may either arrive in wholesale markets or warehouses of the supermarkets. 70% of bok choy will be through the distributed to Hong Kong’s wholesale markets. They are mainly Western Wholesale Food Market and Cheung Sha Wan Wholesale Market. Normally, the peak hours of these markets will be in the early morning at 5-9am. Lorries will be loading newly arrived vegetables for the restaurant or wet market owners to purchase. At 10-12noon, the markets will be cleaned up and the rubbish will be organized to the collection points.

Another route that distributes bok choy through supermarket has emerged since around 2001. Bok choy in supermarkets also mainly comes from licensed farms in China. Supermarkets have set up their own quality checking and sampling system for their imported vegetables. With their own connection to farms, bok choy are delivered to supermarket directly after harvesting, which is regarded as ‘by-pass distribution’. 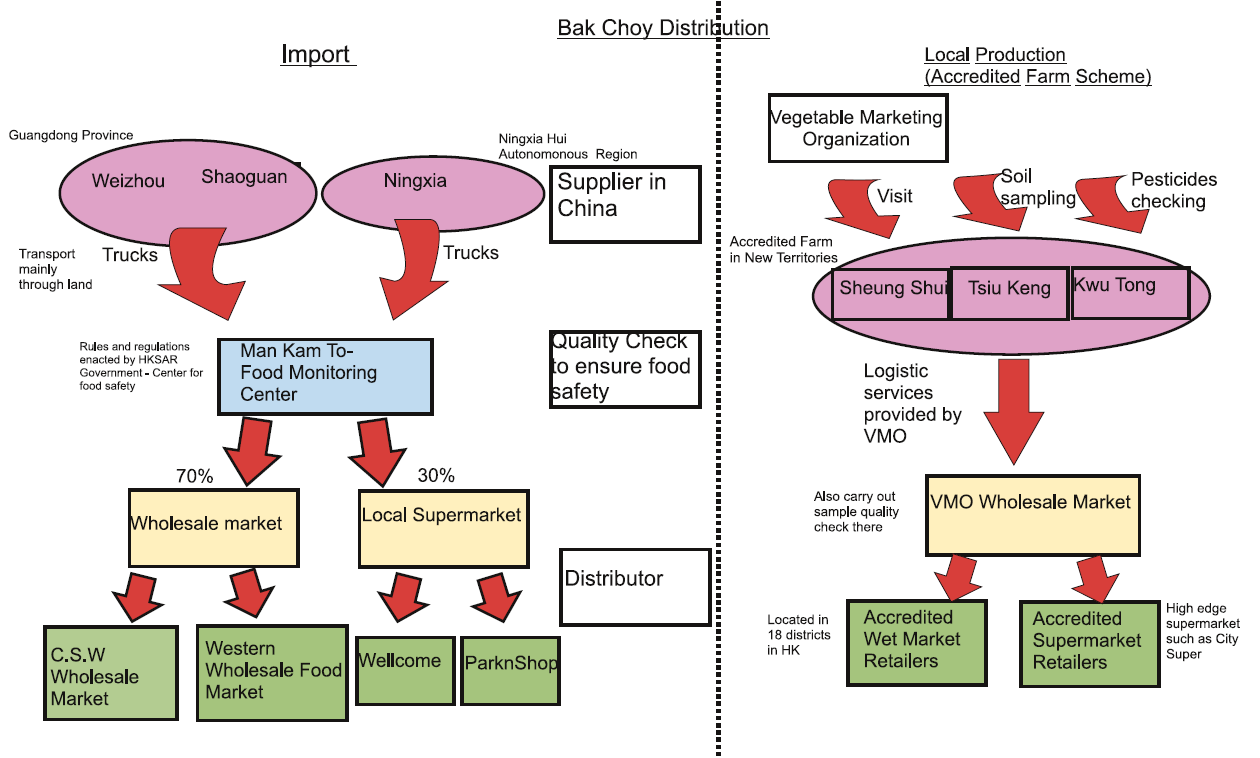 In the production of bok choy, it may generate plastic waste like bottles and bags. Due to the increased knowledge, they are now reused. In some higher technology farm in NingXia, waste water generated will be converted to hot pressurized steam and used for heating. Biological waste such as weakened bok choy or unwanted parts of bok choy can undergo decomposition to form compost or used as pig’s food. The compost produced can be used to make organic fertilizer for local farmlands or sell to overseas.

For transport and wholesaling, foam boxes are used for holding the bok choy and will become waste after used. In order to reduce the amount of waste and to lower the cost, foam boxes are often reused. The boxes are collected and sent back to mainland China for holding the next batch of bok choy for import. Also, the unsold food items in wholesaling and distribution may contribute to the waste produced in the food network. The surplus food may be collected by charity organizations such as Green Hong Kong and Foodlink Foundation and then distribute to the needy.

Lastly, there is 3200 ton of food waste produced in Hong Kong each day. The leftover food can be made into fertilizer and fish feed. The remaining may undergo incineration or eventually go to the landfill. 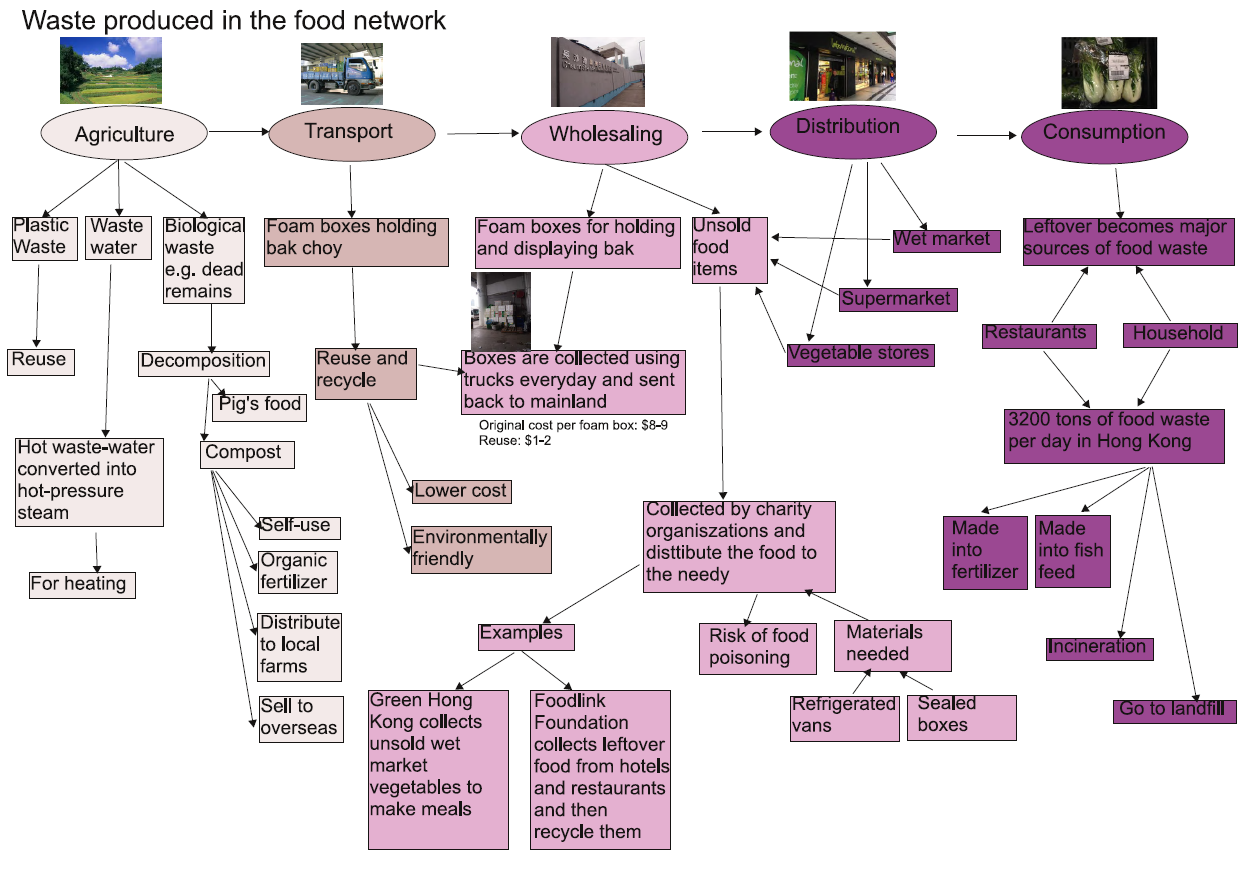