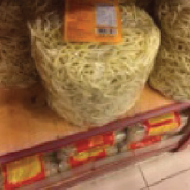 Undoubtedly, noodle is one of the essential ingredients for beef noodle soup. Unlike other ingredients which can be obtained naturally, noodle can only be obtained after some manufacturing processes on the raw materials such as flour and eggs. Therefore, In the following, we will first describe the import of noodle and its ingredients in Hong Kong and followed by how raw materials are processed to noodle sold in Hong Kong and waste incurred during the whole process.

Generally, China is the greatest supplier to Hong Kong. Other Asian countries such as Japan, Taiwan and Thailand also import a large portion of food to Hong Kong whereas western countries generally make small amount of import to Hong Kong.The description of import can be separated into three parts, which are noodle, flour and eggs. 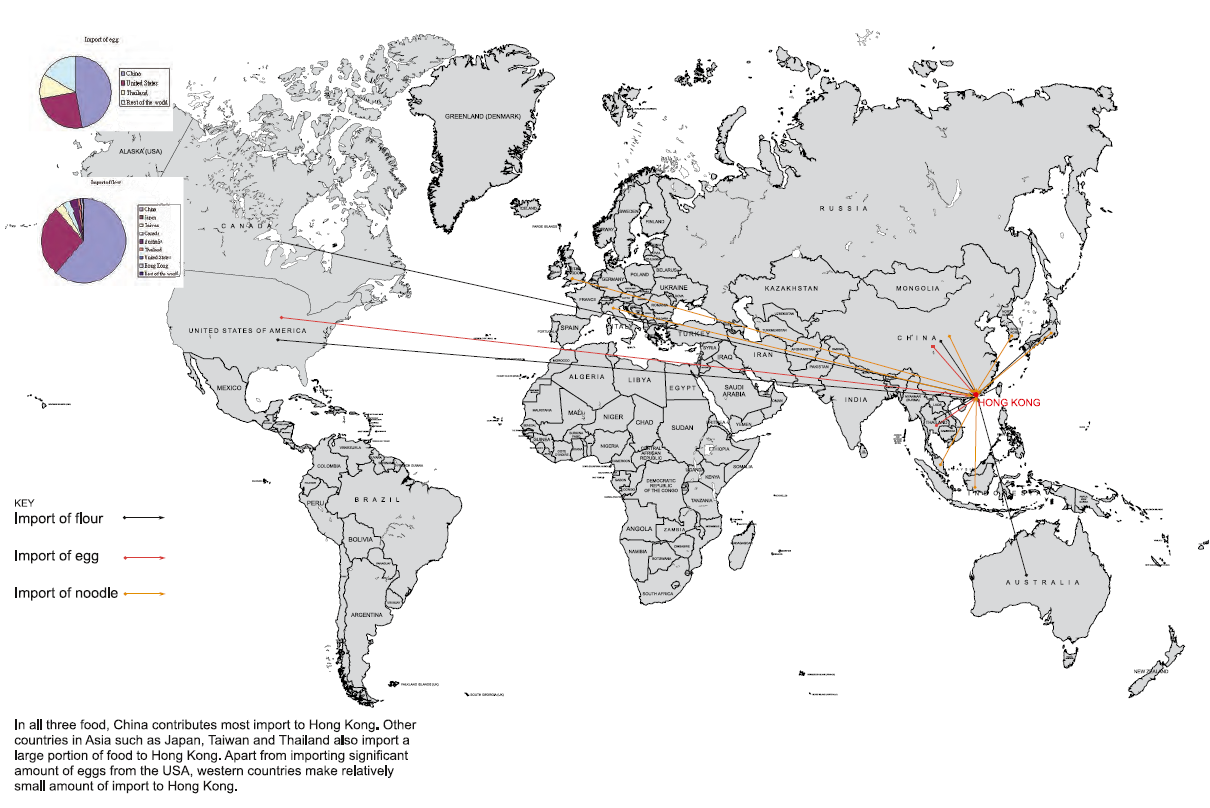 Flour is mainly made of wheat, so the first step is to harvest wheat. Then, the harvested wheat is brought to a factory for an important procedure – filtration. During this process, many unwanted materials are filtered out such as dust, stone and coarse. If they are not removed, the quality of the flour will be affected badly. Then, the filtered wheat is ground into flour. After further filtration to get rid of impurity, they are sent to packaging and will be ready to use.

Unlike flour, eggs can be collected directly, but they still have to undergo some procedures before selling. Those procedures are to ensure eggs’ quality and prolong their storing period. For instance, they are inspected right after collection. Also, they are heated and some addictive are applied on them to increase the storing period. Then, as they move on the packaging stage, they are grouped and packaged in accordance to their weight. Eventually, all processes are completed and eggs will be sold for further uses.

Although the production mechanism is similar, the production of noodle can be divided into two types, namely large scale and small scale production. The former one is usually implemented by
some large companies who own a big factory whereas the later is applied by some small factories or restaurants who made their own noodle. There are mainly two differences between two types of productions:

1. Quantity of noodle produced
Large companies have more resources, so they afford to purchase more ingredients and machines as well as hiring more workers. Therefore, they usually produce larger amount of noodle. Also, another factor affecting the production quantity is the demand. Small companies usually have fewer orders so they seldom produce large amount of noodle.

2. Use of machine
In large scale production, machines are used frequently. As mentioned in last part, they have produce a large quantity of noodle, the use of machines can enhance their production efficiency and hence make their business more profitable. Whereas for small scale production, the quality of noodle is of high importance. Thus, they usually prefer handmade noodle as quality can be controlled more easily. 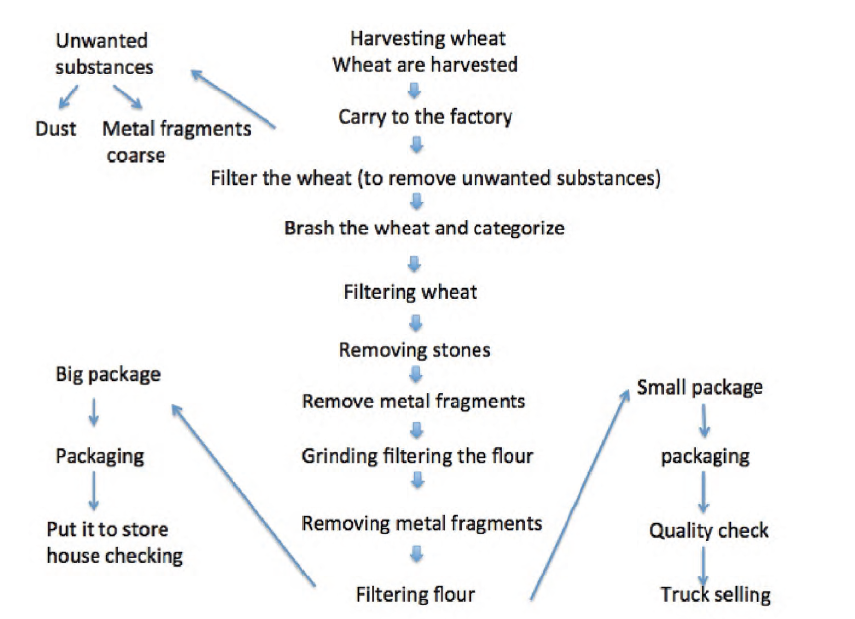 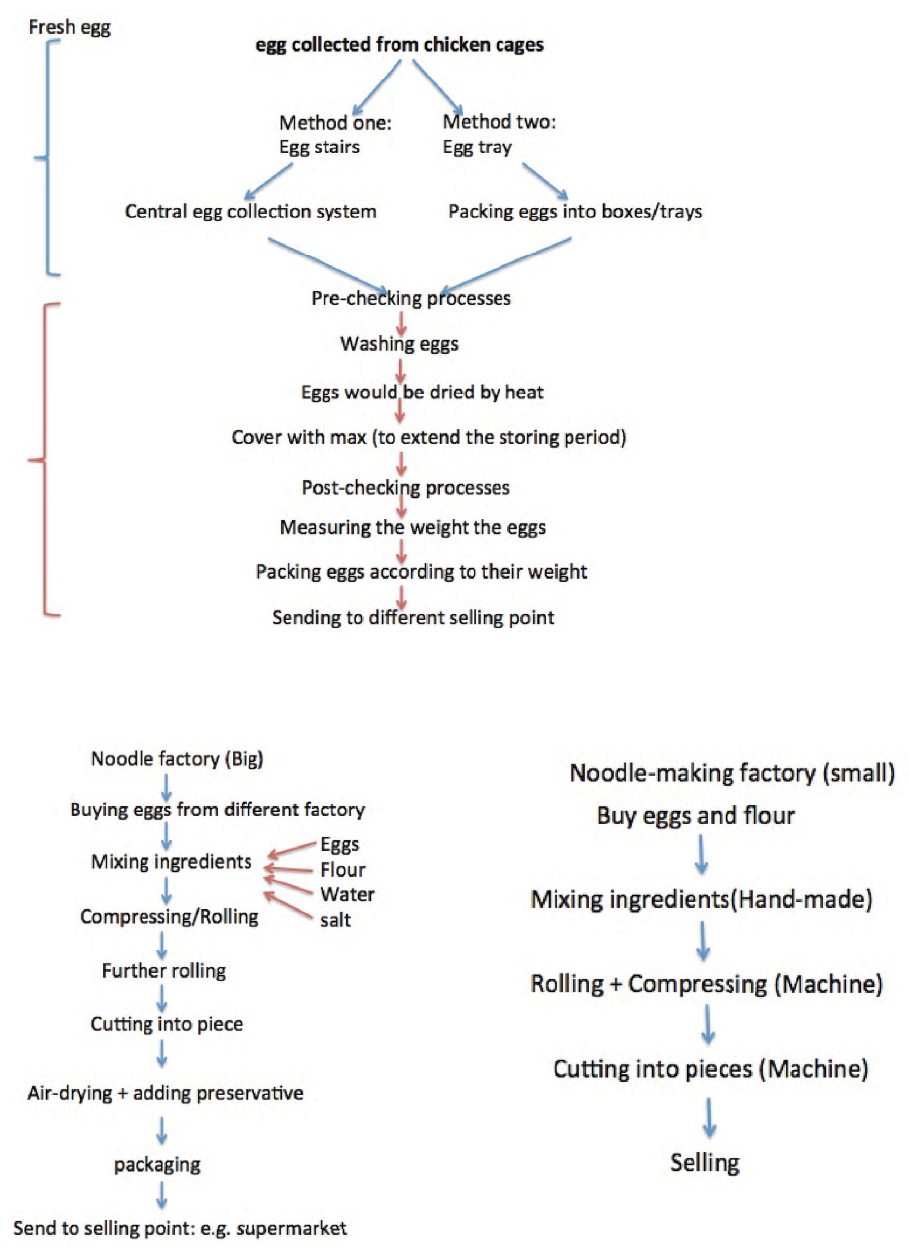 After production, noodles will be distributed to different selling points or sold immediately for the case of small scale production. In Hong Kong, we can buy noodle in many places including supermarkets, wet markets and grocery stores. In here, we have completed the path of noodle from collecting eggs and wheat to selling noodle in stores.

Waste is generated in the food network. For instance, processing of ingredients produces waste such as waste water used to wash eggs and residue from the filtration of wheat. Also, the production of noodle requires the use of machine, when electricity is generated to use machine, waste is also incurred. Moreover, during transportation of ingredients and noodle, waste gases are produced. 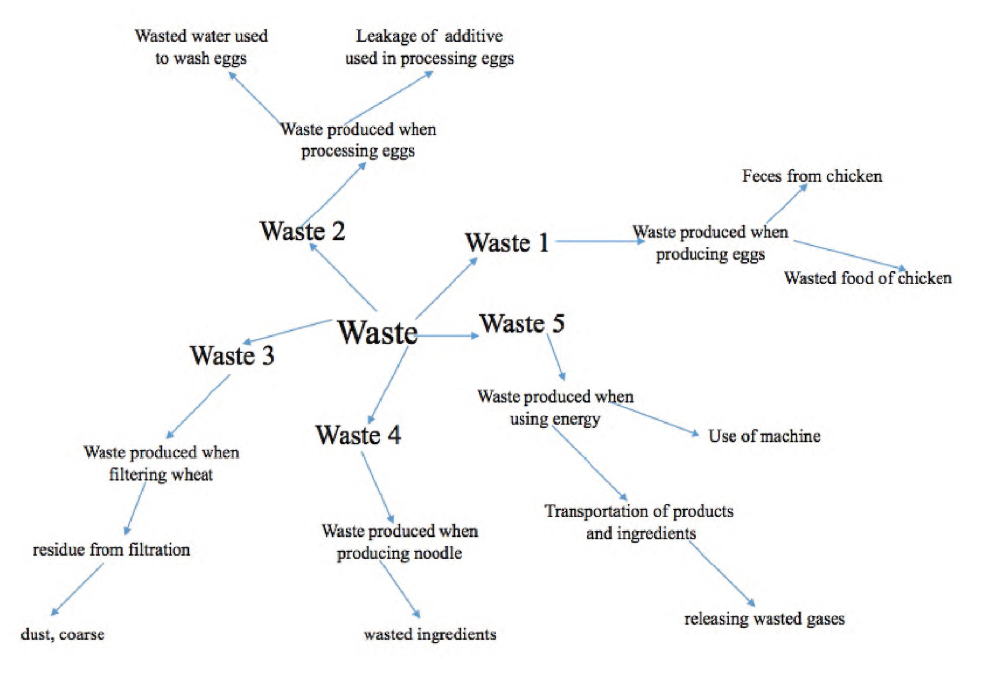