Ginger and garlic are native to Asia and used in a huge variety of Chinese dishes. They are deemed as the basic seasoning with their pungent flavor. The two ingredients are also used for both culinary and medical purpose. In beef noodle soup, garlic and ginger are also important seasoning that make the noodle taste better. So, what’s the story behind ginger and garlic? How do they come and end up in our stomach?

For ginger, other countries such as Australia, France, Indonesia, Japan, South Korea and Netherland supply the remaining 1% imported garlic in Hong Kong.

For ginger, Taiwan is the second largest supplier. About 27% of gingers are imported from Taiwan while around 20% of ginger come from Vietnam. Other countries included Australia, Japan, Sri Lanka and Thailand contribute around 4%of ginger consumption in Hong Kong. 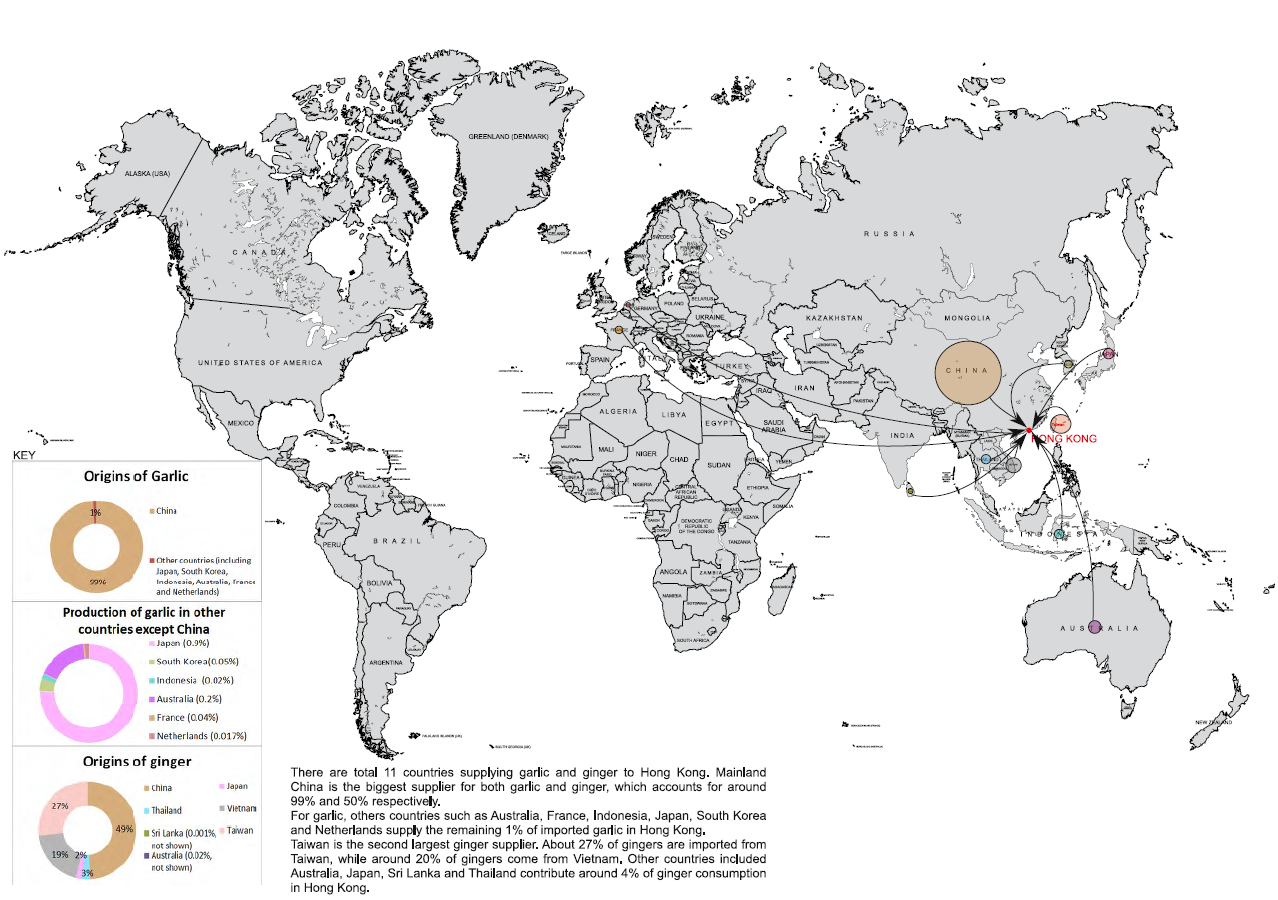 For the site preparation of garlic and ginger, the requirements of soil are very similar. Well-drained and well-tiled soils with high organic matter are most preferable. The soils have to be free of perennial weeds. As gingers are a type of rhizome, which grows horizontally, they have to be grown in soil of at least 30cm depth. Most of the garlic and ginger have to be grown by hand to make sure they are put under the soil firmly and separately in order to have space for their growth.

The harvest time for garlic and ginger is different. For garlic, when 40% to 60% of the leaves have yellowed, it marks the time for harvest. Usually the harvest time for garlic is the second week of July to the first week of August. Farmers will then dry the leaves, cut bulbs into half-clove, brush off the dirt and let them dry again. All these process are labour intensive. They use their hands to handle the reaped garlic. For ginger, the harvest time for northern hemisphere locations are at the beginning in December and the harvest time for southern hemisphere locations are at the beginning in July. Ginger should be reaped before the rhizome develops high fiber content. After reaping the ginger, farmer use hands to trim off the rhizome and to wash out the soil. Both of the garlic and ginger have to be dried completely after washing and prevent them to get wet again in order to preserve a good quality.

Garlic and ginger will then be loaded to truck for export after completing the above process. The have to be stored in air conditioning containers with good airflow and avoid direct sunlight. This can preserve the quality during transportation. 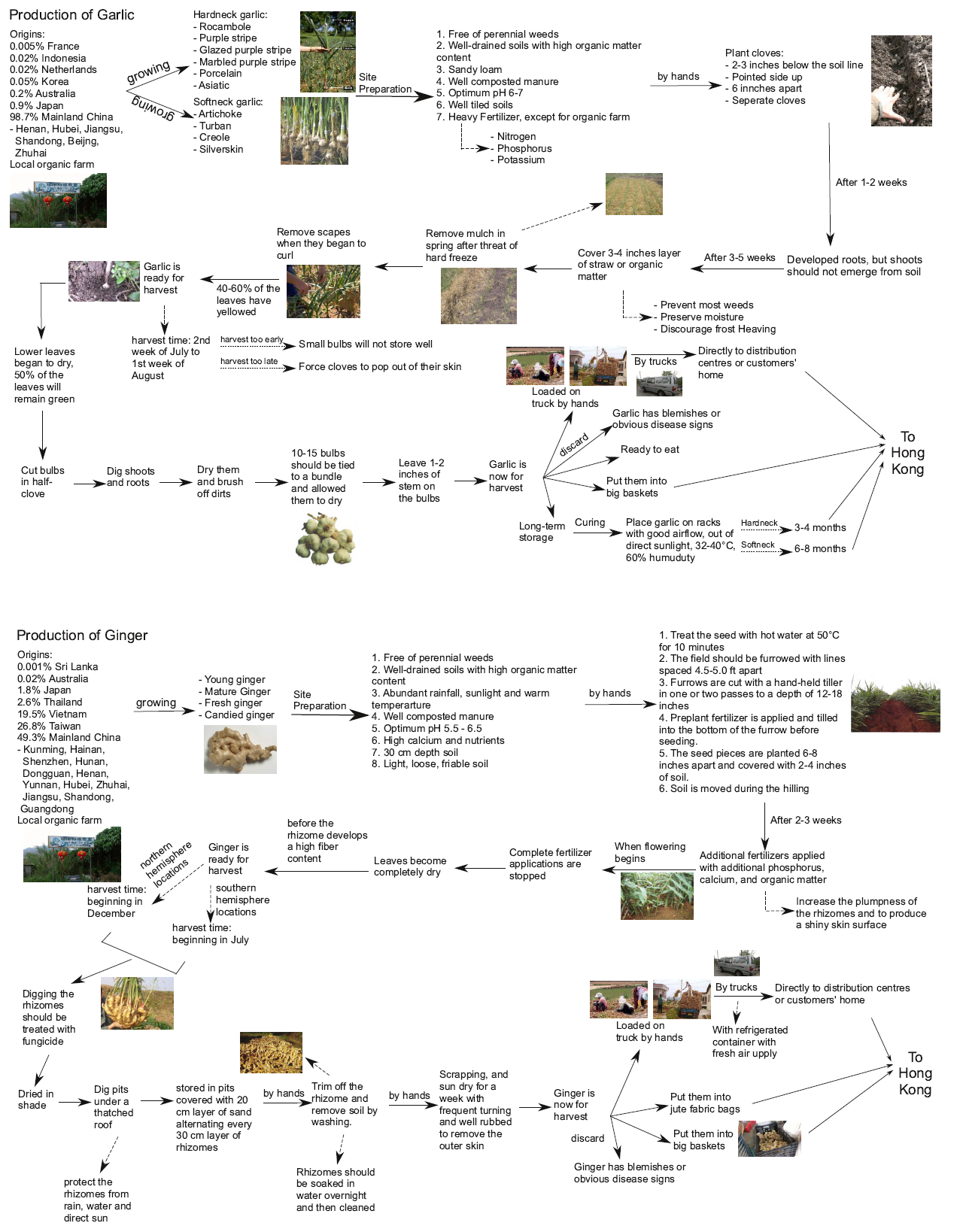 Distribution routes of garlic and ginger depend on their origins. With different production sites, the approaches will have variations. Basically, the routes are divided into 4 categories, from local organic farm, local farm, farms in China and foreign countries.

Local farms are suppliers of garlic and ginger. They will deliver the goods to retailers directly or sent their products by trucks to North District Temporary Wholesale Market for Agricultural Products but no other wholesale markets in Hong Kong.

There are few more ways to distribute garlic and gingers from farms in China. The first way is that wholesalers hire porters to transport their goods from farms to their shops in wholesale markets by trucks. The second approach is that some organizations in mainland help wholesalers ordering vegetables from various farms and gather it in Shenzhen. The vegetables will then be transported to different wholesale markets through Man Kam To Control Point (MKTCP). The last method for garlic and ginger deliver from China to Hong Kong is that some farms in China would send their goods to restaurants or retailers in wet markets directly. For some supermarket with their own farms such as Parknshop, Wellcome and Kai Po, they have porter groups and send their goods to supermarkets by trucks directly. 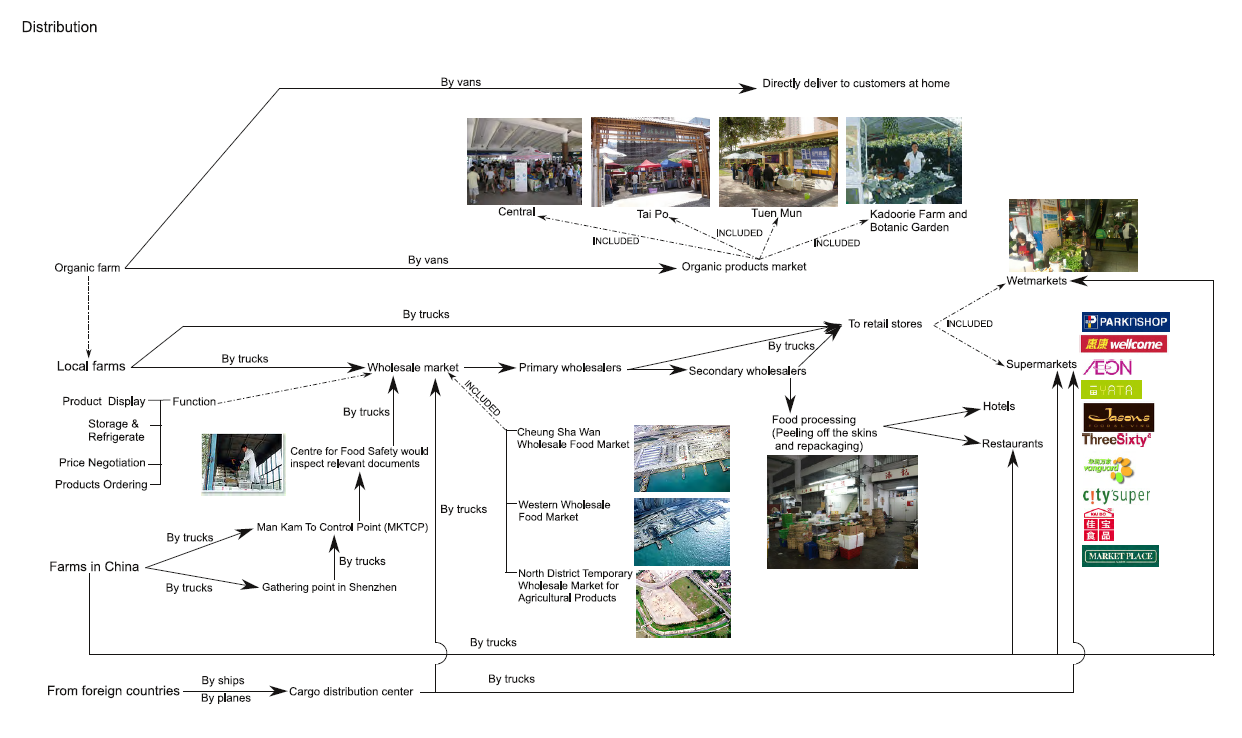 During the production stage, most of the wastes are the removed scapes and mulch. They are not being consumed or exported, and finally go to the landfill sites. Only the bulbs and the rhizome will be consumed and exported for sale, the unused underground stem, such as leaves, shoots and roots will then be discarded. If any of the garlic or ginger has blemishes or disease sign, they will not be exported and be discarded. Another main waste generated during the production stage is sewage from washing process. Garlic and ginger have to be washed in order to remove the soil, debris and microbe before drying. This process consumed a lot of water and become sewage; they will go to the sewage treatment facilities finally.

During consumption process, wastes arise due to several reasons: packaging and consumption method. Garlic has a special packaging compared with gingers and other vegetables. Several garlics are packed into a net and then sold, instead of selling them individually. However, environment sacrifices for convenience, due to waste produced from the packaging nets. Apart from packaging, since both garlics and gingers are used for flavoring, they are not consumed completely. For example, a ginger has many fibers and corky skin, which is peeled off before cooking. As a result, energy in them is wasted. 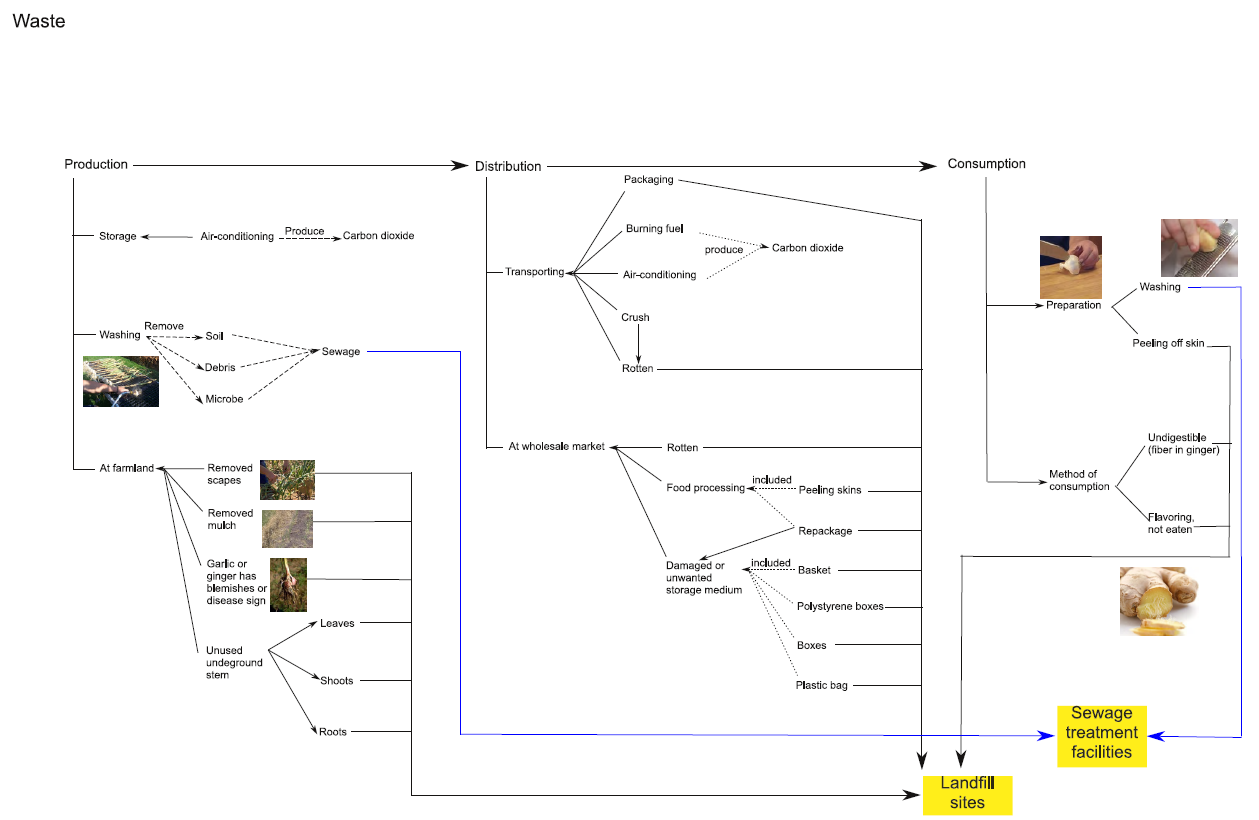