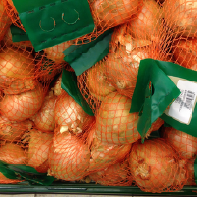 Onions and green onions are widely used for dishes in Hong Kong. It is almost essential to put onions or green onions when cooking to give the dish a flavor. But how do they come to our plates? Usually, green onions and onions will go through three main stages, namely production, distribution and consumption. During each stage, there will also be a production of waste and it can be used for generating energy.

Onion, despite the cheap price, is imported from various places. Unlike most crops, the major import of onion is not from China, but India. New Zealand is the main importer of onion to Hong Kong. Indian onion takes up of 34% in Hong Kong onion market while 28% of Hong Kong onions are from New Zealand. Onions from mainland China only take up 21% while a small percentage of the onions are imported from the US, Malaysia and Japan respectively. This is very interesting as the transport fee would be quite high. So why do India and New Zealand onions have a market in Hong Kong?

India is the highest onion producing country (APEDA, 2013). Onion from India is famous for its strong scent and is available all year round. Besides there is a huge global demand for Indian onion, the country has exported 1,666,872.63 MT of fresh onion to the world from 2012-13 (APEDA, 2013), proving the popularity of Indian onion. New Zealand onions, on the other hand, have long been exported a long way to Japan, besides they put a lot of resources to improve the storage characteristic of onion (Onions New Zealand Inc., 2009). This allows the New Zealand onions to have long shelf life and are sea freight, letting them to arrive Hong Kong in a perfect state (Onions New Zealand Inc., 2009). 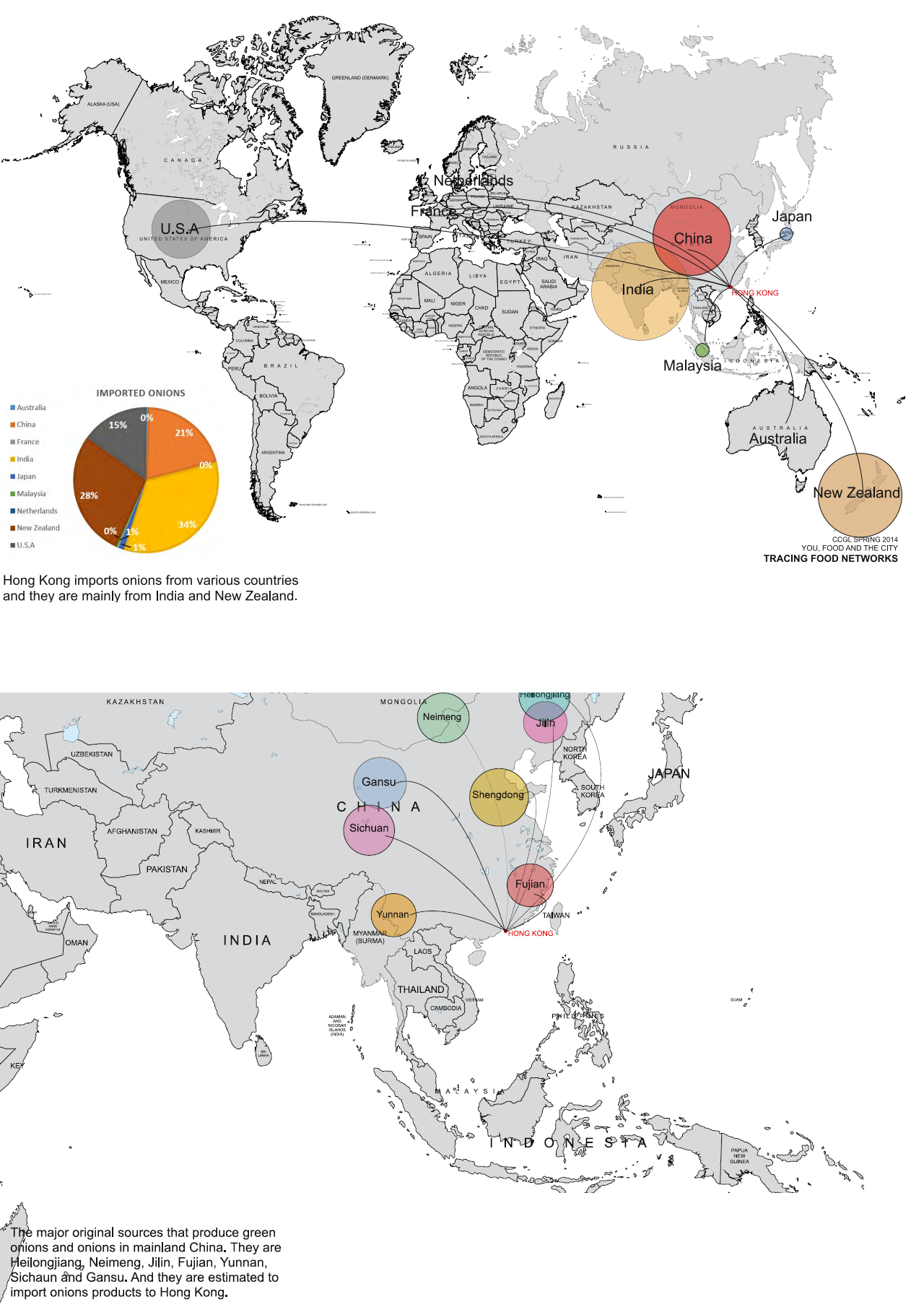 At a production stage, onion is usually produced by seeding directly or transplanting. They will mature in 100 to 140 days. It is best for them to grow in a mild climate, without extreme temperature nor excessive rainfall. As for green onions, many people would grow them at home as they can be transplanted into a small container and mature in 35-45 days. Green onions also grow best in mild climate. After they are fully matured, they can be harvested.

Onion can be harvested manually or by using mechanics (Opara, 2003). Workers would first lever the bulbs of the onion with a fork to loosen them, then they will pull the onion out by grasping the top of the plant. On the other hand, mechanic method is usually applied in developed countries. It can be done in two ways, a one-phase method and a two-method. For one-phase method, leaves of the crop will be mowed and then immediately harvested and sieved to remove debris. The crops will then be dried using machines and then loaded. For two-phase method, leaves will also be mowed. Then onions will be harvested and sieved to remove debris. It is different from one-phase method because the bulb will be left to dry naturally for 8-10 days instead of being dried in machines. This stage is called as windrowing. After that, they will be loaded into a trailer or crates and being transported. One-phase method can save some labor cost, but would increase energy usage as drying is done by using machines (Opara, 2003).

Green onion harvesting is much more simple, just pull them out from the soil then it is done. Note that green onion cannot be pulled from the leaves as it will damage the tissue (National Agricultural Research Institution, 2004).

To ensure the onions and green onions are intact when they reach the customers, they must be properly packaged. For green onions, they will be brunched before packing and then contained in a well-ventilated durable plastic container (Gesamtverband , 2014). As for onions, they will be cure before packing and put into a refrigerated container if they are chilled onion, or just put into well-ventilated containers (National Agricultural Research Institution, 2004). 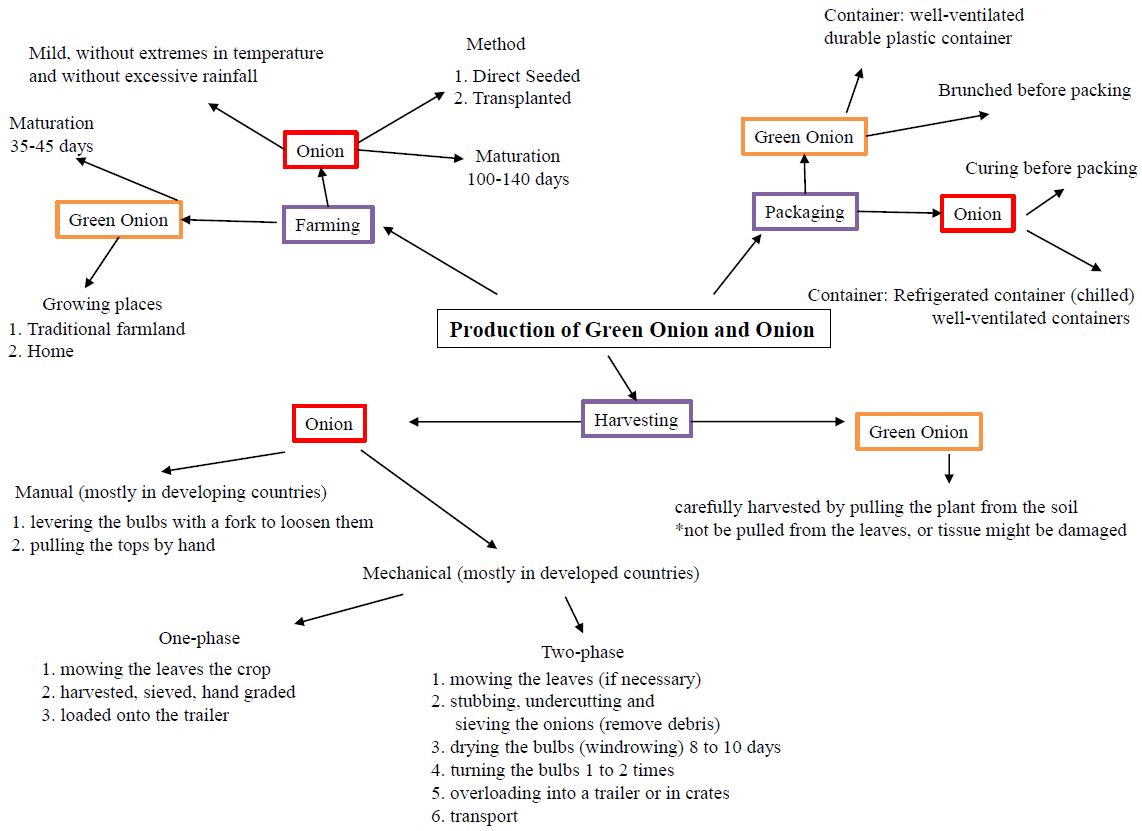 The second stage is distribution. Onions from overseas are mainly transported by aircrafts; from mainland China are transported by aircrafts or trains; from local farms are transported by vehicles. For onions which are imported from mainland China, before they get further distributed for consumption, they need to go through a quality control. All the imported vegetables have to have a Pesticide Declaration Certificate, Monitoring Card etc. for inspection and there is a Food Control Office at Man Kam To near the border for testing samples. In addition, a Food Surveillance Program operated by the Centre for Food Safety of Food and Environmental Hygiene Department will take random samples of vegetables at import, wholesale and retail level for testing regularly to ensure they do not exceed the Maximum Residue Limits recommended by Codex Alimentarius Commission (CFS, 2013). After this process, green onions and onions can be transported to the wholesalers such as Western Wholesale Food Market by vehicles which are then sold to different retailers like supermarkets and food stores as well as catering services like hotels and restaurants. Finally, they go to consumers.

The collective consumption of onions products are usually conducted by the wholesalers inside the wholesale market. To compose a trading network, there are primary and secondary wholesalers which are depending on their trading size. The purchase varies from several piculs to a large amount. It is different from purchasing onions at the supermarkets and wet markets. The trading hours of the vegetable products start at the mid-night from 3 a.m. and the peak hours are only few hours at 5:30 a.m. to 9 a.m. (Wholesale Markets Management Division, 2014). In later stages, those products are further traded to smaller wholesalers within the wholesale food markets and even to the local wet markets nearby our home. 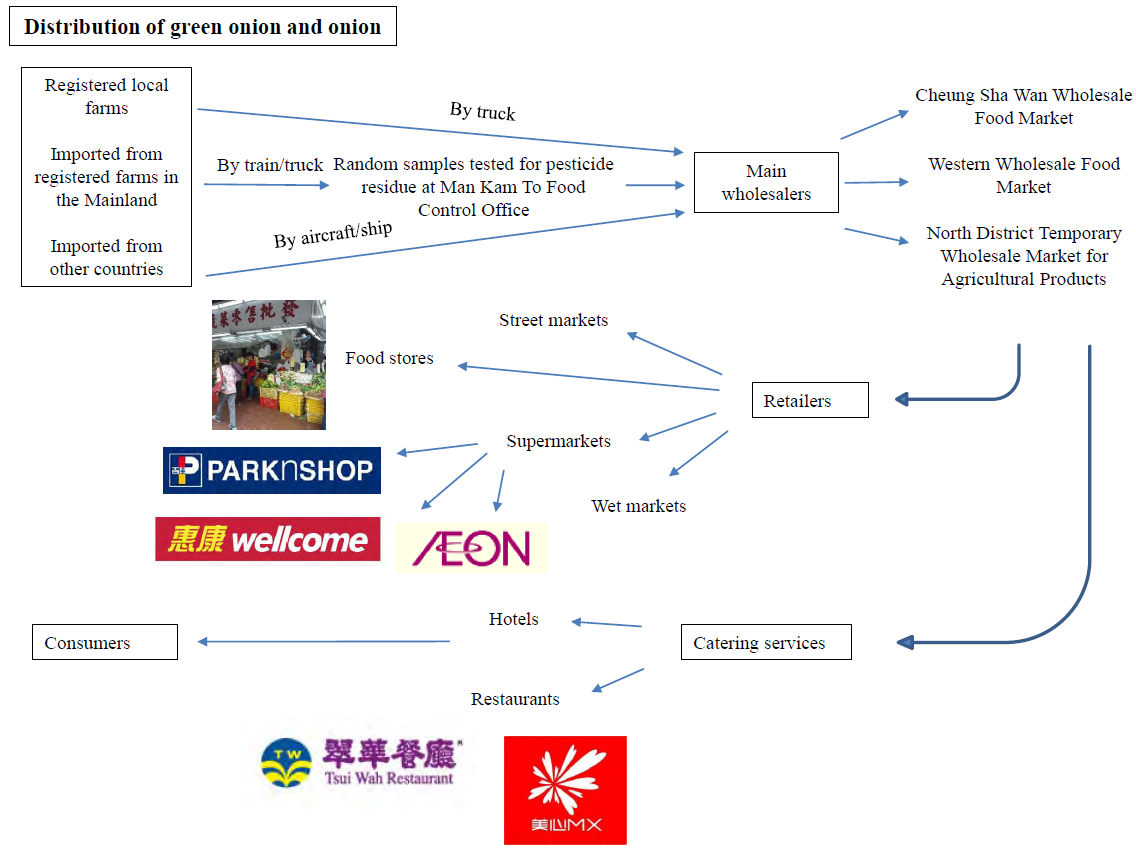 During each process from farm to plate, there is certainly a generation of waste. Since appearance and packaging are relatively important when they are being sold, there might be some green onions and onions being dumped, some wrappings being disposed etc. According to Gill Onion Processed Factory, in 217.8 million pounds of processed onion, only 46% of them becomes finished product and the rest will be dumped into landfills and according to a survey conducted by Oxfam, the main reason why vegetables are being wasted is due to their “unattractive appearance”. Moreover, during the transportation process, there is greenhouse gases emission, contributing to 4350 mt CO2 which equals to the carbon dioxide emission from 397 homes’ energy use. As for the materials used, out of 566 tons of waste, only 25% are being recycled, the rest goes to the landfill. 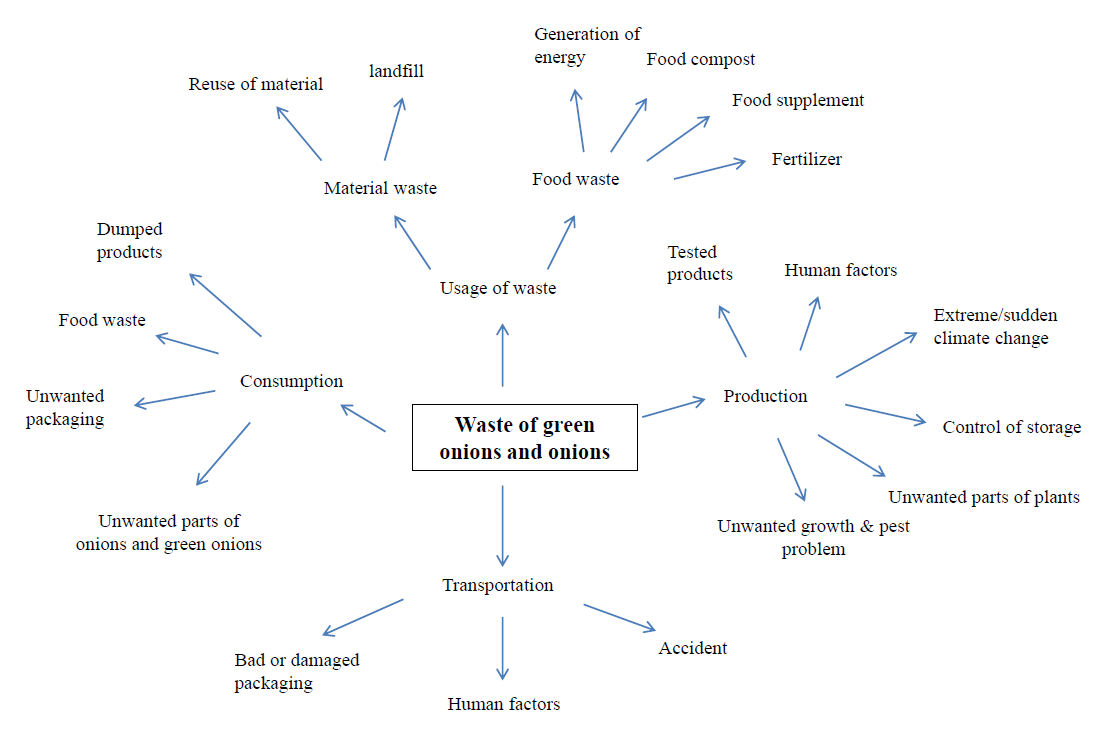