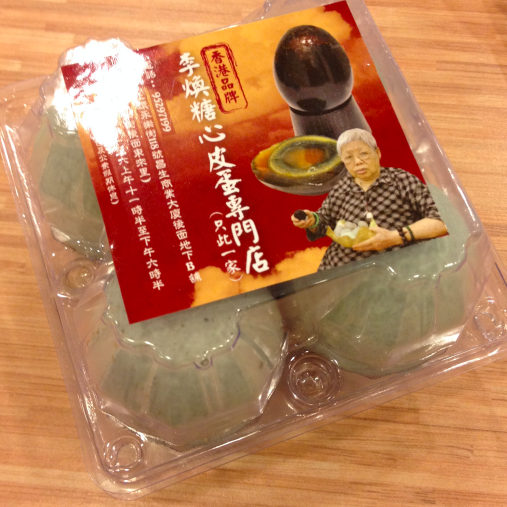 Century egg, or pidan, is a traditional Chinese cuisine ingredient made by preserved duck eggs. It is made with a mixture of clay, ash, salt, quicklime and rice hulls for several weeks to several months. The century egg has over five centuries of history which can be traced back to Ming Dynasty. Traditional as it is, century eggs sold at supermarket are not of highest quality. Lee Wun, the oldest local century egg producer which has its own unique formula to make eggs, is probably the best choice for people who want to grab a real taste of traditional ceuntry eggs. In addition, traditional store selling salted and dried food in the wet market is another good place to purchase century eggs with lower price. 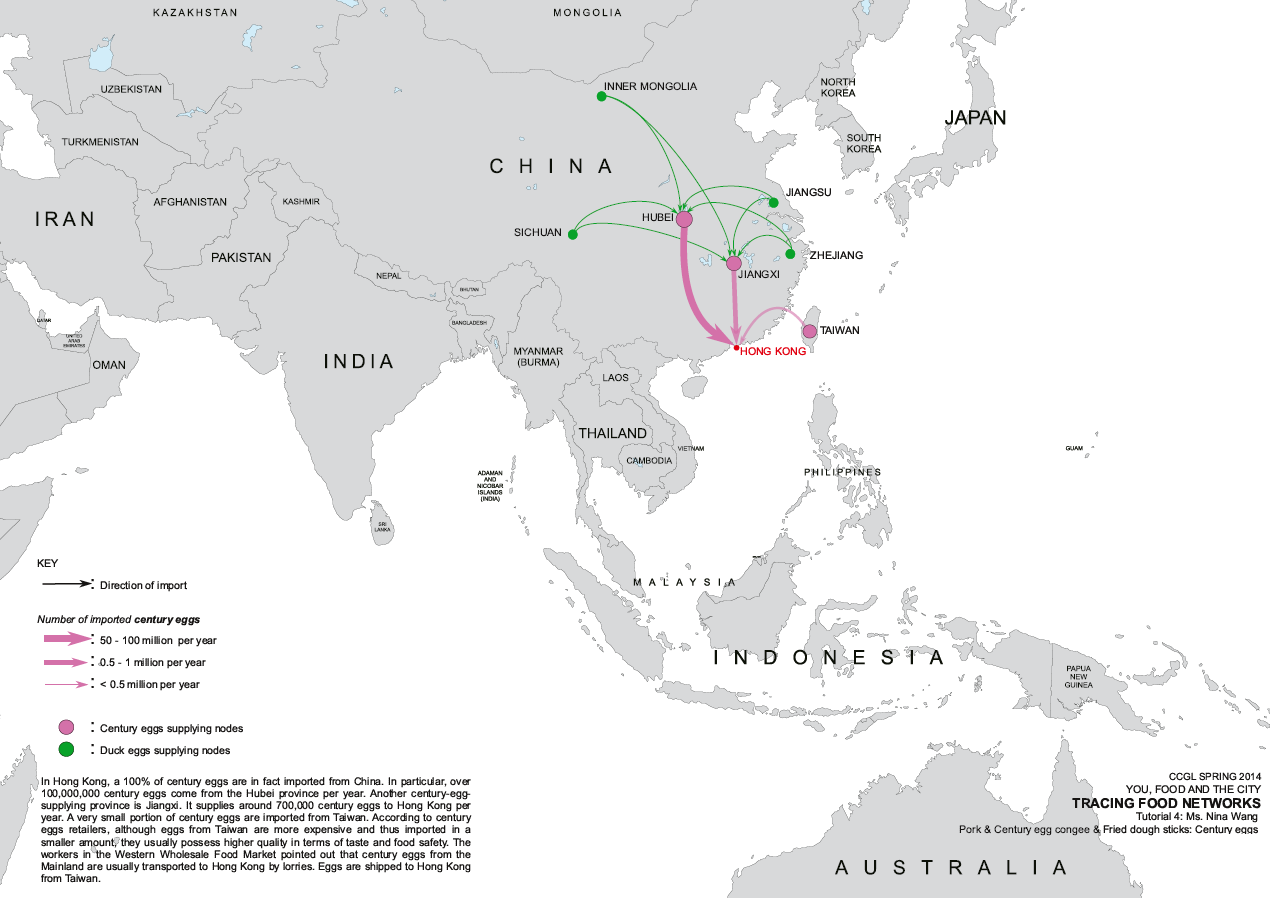 There are two production methods for making century eggs. The traditional production method includes 4 major steps. Firstly, fuse three pounds of tea in boiling water. Then add three pounds of quicklime, nine pounds of sea salt, and seven pounds of wood ash from burned oak, and mix all the ingredients into a smooth paste. Gently coat the eggs with paste, then rolled in a mass of rice chaff to keep the eggs from adhering to one another before they are placed in cloth-covered jars or tightly woven baskets under 24-32 degree celsius. After 90-120 days the mud dries slowly and hardens into a crust. Gently remove the muddy coating and the eggs are ready for consumption.

On the other hand, the modern method is more convenient and less time-consuming since it involves the use of industrial chemicals. First, soak the eggs in a mixture of salt, calcium hydroxide, and sodium carbonate and other chemicals for several weeks. Secondly, take the eggs out from the mixture and wrap them in plastic foils for 40-60 days depending on the season. Remove the plastic foils and the eggs are ready to serve. 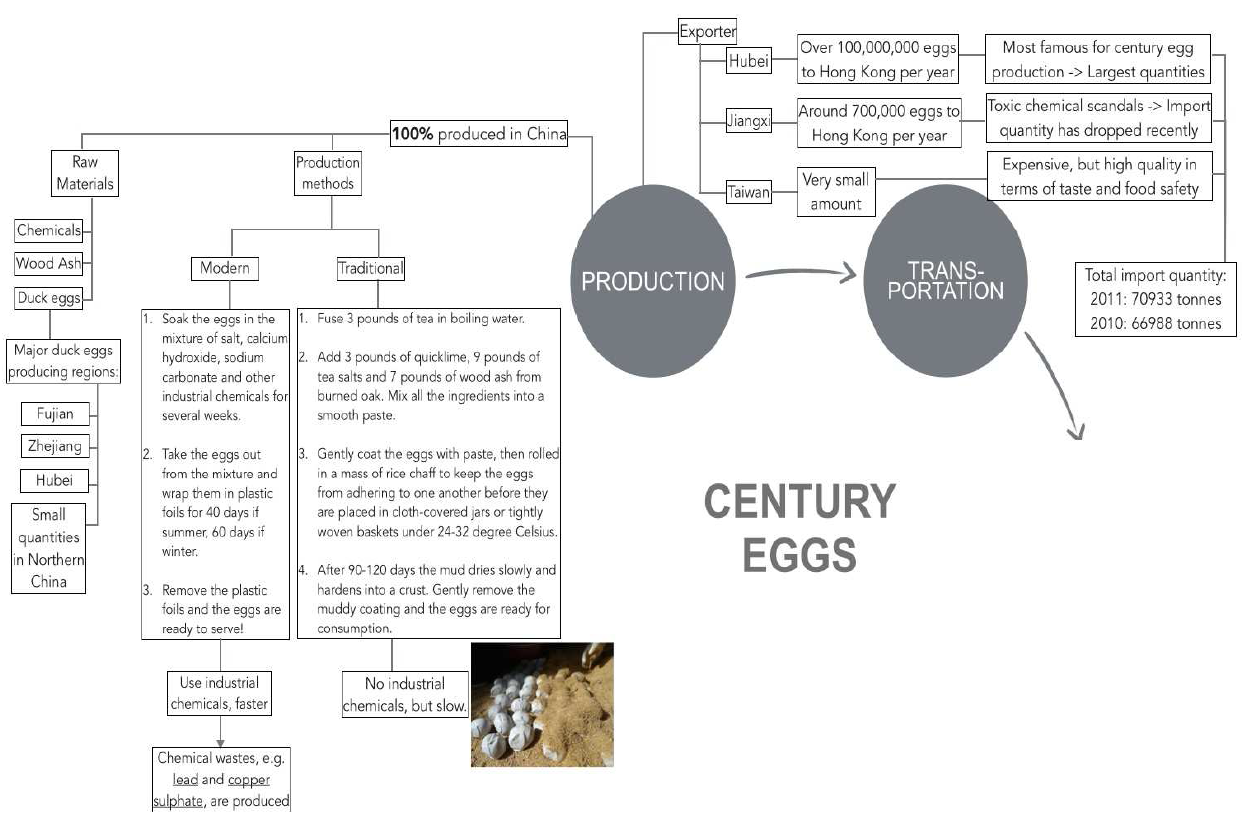 After repackaging the eggs into smaller boxes, these eggs are then redistributed to the supermarkets and wet markets in different districts. Also, there are two famous local century egg specialty retailers in Sheung Wan: Lee Wun and Shun Hing. These two shops purchase duck eggs from mainland duck farms, then process them in their own factories with their unique production methods. Staff from these shops pointed out that daily sales of eggs are around 50 – 80 packs of century eggs which contain 4 eggs per pack. 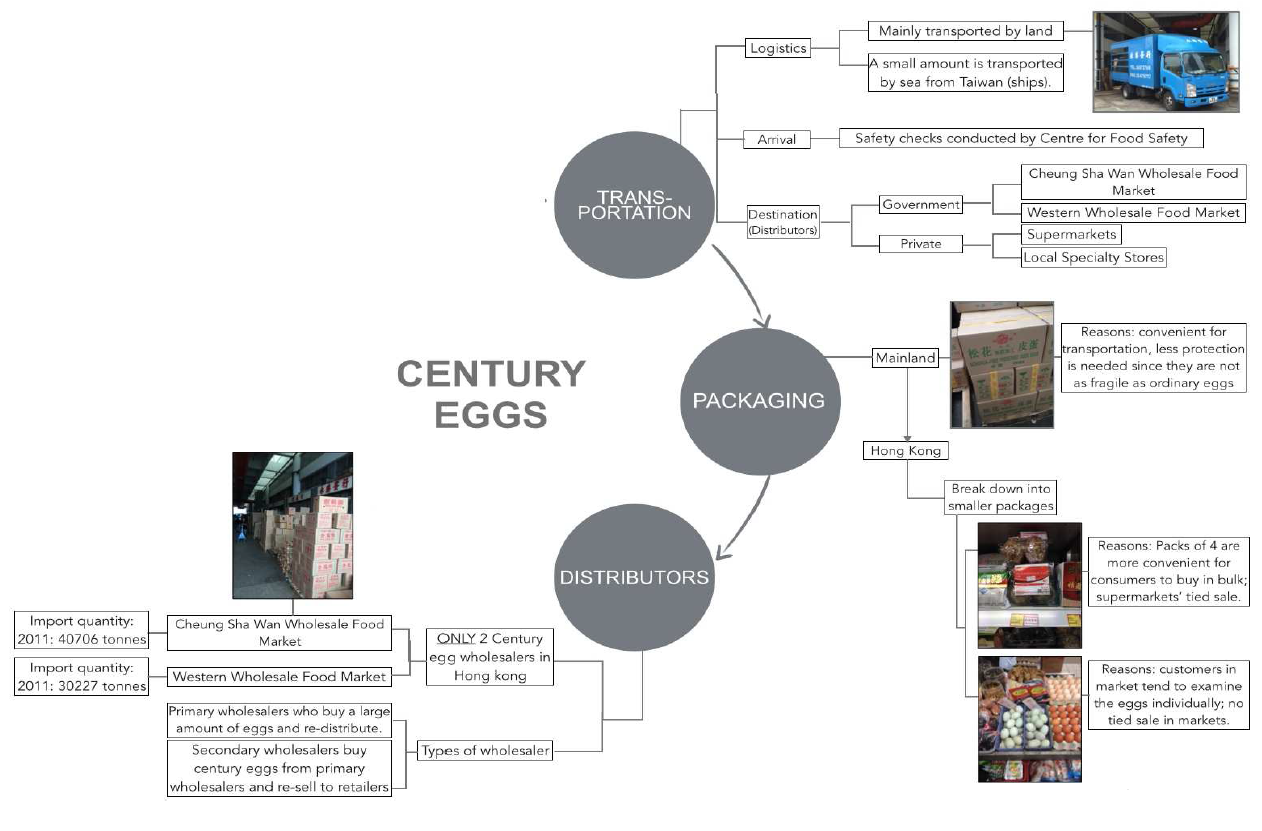 During the production of century eggs, the use of chemicals produces a large amount of heavy metal and chemical wastes including lead. Some unscrupulous egg producers may use chemicals such as copper (II) sulphate to shorten the time for production from 4 to 1 month. These chemicals are discharged to water treatment plants, which use chemical methods like electrolysis to remove heavy metal ions from the waste water. Moreover, the century eggs themselves may contain lead. The Chinese government has banned the production of lead-containing century eggs since over consumption of these lead-containing eggs might cause cancer. All the century eggs you can buy now in Hong Kong are labelled “without lead” on their boxes.

Another source of waste is produced by consumption. Since century eggs are biodegradable food waste, their leftovers primarily go to the landfills. A portion of the uneaten century eggs will enter into the waste recycling facilities. One food waste treatment plant is the Kowloon Bay Recycling Centre and there will be another Organic Waste Treatment Facilities on Lantau Island in 2016. After the disposed century eggs are processed in these waste recycling facilities, they will undergo anaerobic digestion by bacteria. Eventually, these waste will turn into organic byproducts such as fertilisers and re-enter the food chain for the production of food. 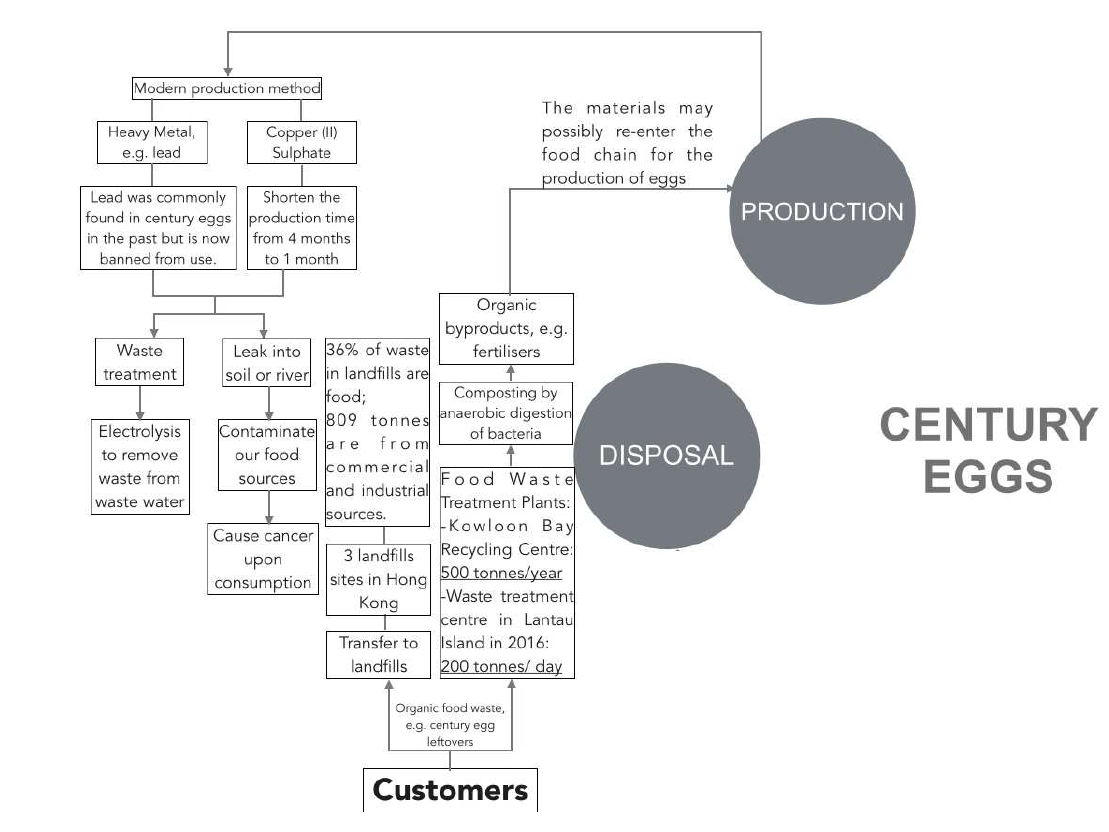