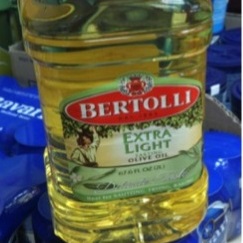 Fried food is crispy and appealing. To prepare fried food, cooking oil is needed to cook the food as a media with a temperature reaches at least 160°C. With the principle of tracing the origin of cooking oil for deep frying, studies is kicked off. The studies can be divided into three parts, consumption, distribution and production. Based on three targeted types of oil including olive oil, soybean oil and peanut oil, production process, transportation from producers to consumers, consumption pattern and disposal treatment are investigated.

In Hong Kong, peanut oil is the prevalent cooking oil with a consumption of 9759 tonnes in 2012. The amount of olive oil used in the same year is 597 tonnes whilst soybean oil is the least demanded among the three oils with 3111 tones as combined with other vegetable oil.

Soybean oil is produced in Qingdao (China), Brazil and Argentina. Peanut oil is produced in Shandong (China), India, South Africa and Malaysia. And olive oil is produced in Italy, Spain, Greece and Peru. Most of the raw materials for producing these oils are harvest locally. After processed in their nations, three types of oil are conveyed to Hong Kong by ferries. 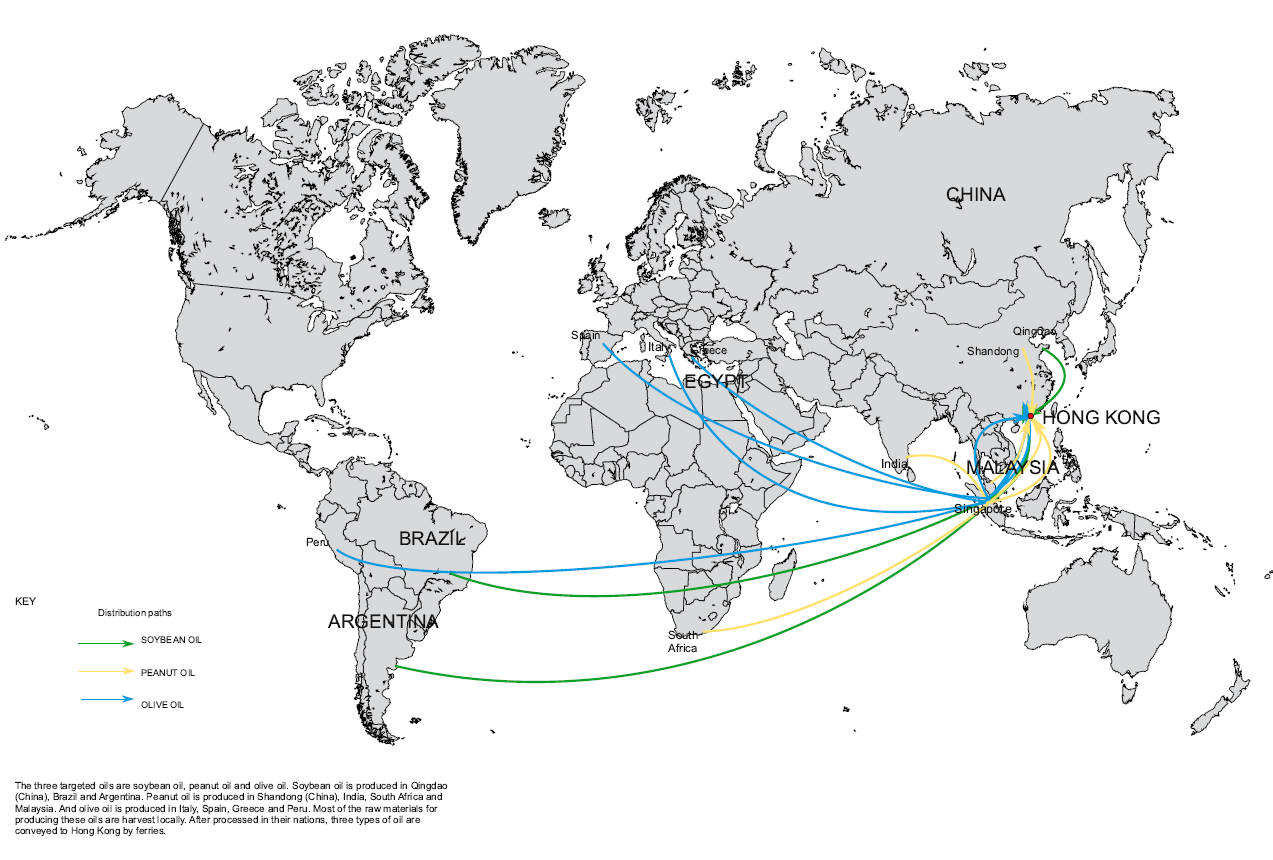 To produce 1 litre of olive, 5 kg of olives are needed. After washing and cleaning, olives need to be mechanically crushed and filtered within 24 hours after harvest in order to ensure the quality. Oil collected after one crushing process is called extra virgin olive. Others are produced with further crushing processes. It is important to notice that the whole process should be carried out below 27°C.

While soybeans and peanuts can be stored before oil manufacturing. Soybeans and peanuts will be gridded by machines under high temperature and pressure. Hexane or 2 methylpentane is then added for further extraction of oil from seeds. Soybean oil is therefore refined using acid and bottled, meanwhile, alkaline and distillation are applied to refine peanut oil before packaging. 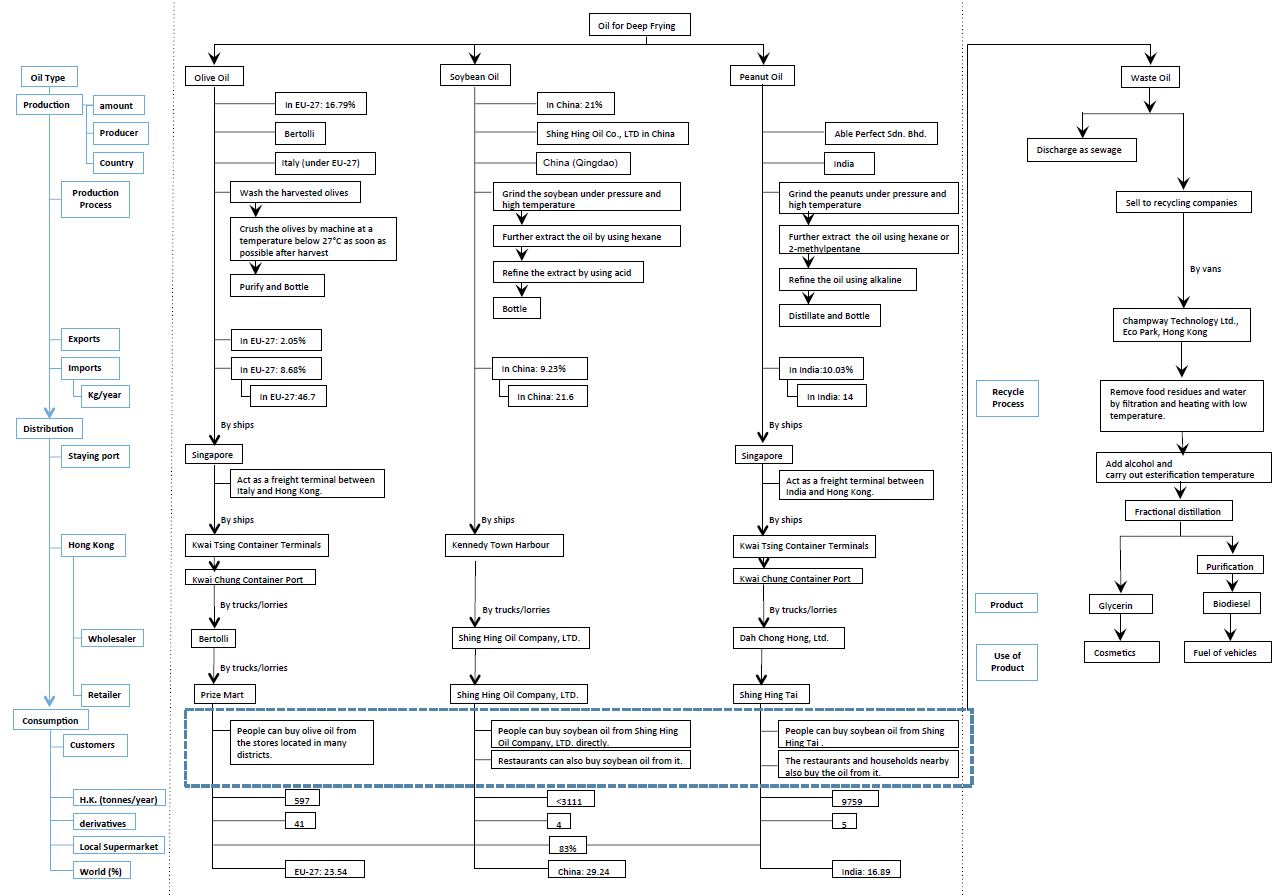 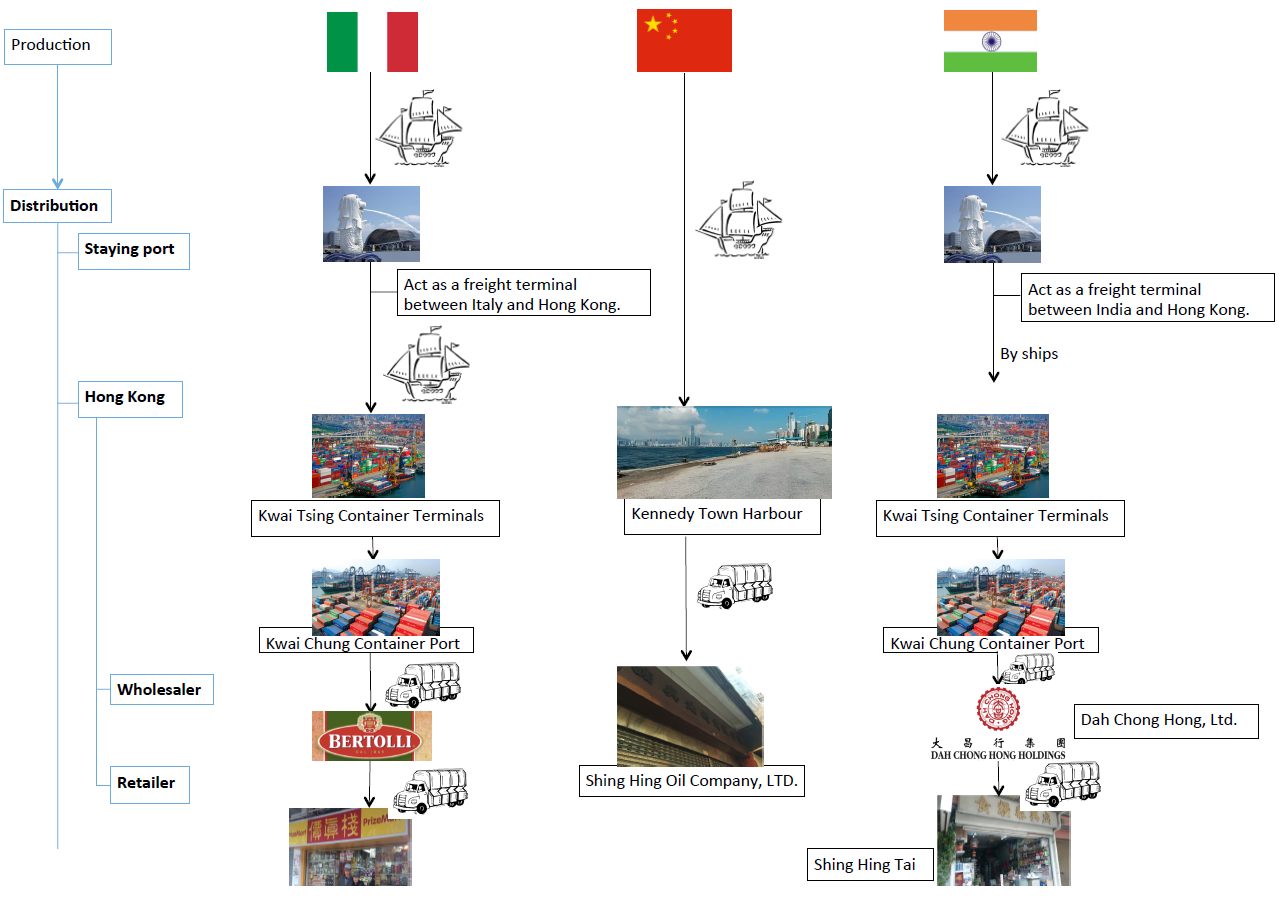 After oil is being used for cooking, since not all oil can be intaken, the used oil itself is regarded as a kind of waste. Due to lack of regulation on the treatment of waste oil in Hong Kong, there are numerous of ways to treat the waste oil. Some restaurants would choose to discard the waste oil through sewage pipe, which is the simplest method while some would sell the waste oil to recycling companies in order to reduce their cost.

Recycling companies collect waste oil and transform it into other useful materials to gain profit. One of the recycling companies is Champway Technology Limited which is located in Eco Park in Hong Kong. Cans of waste oil are first collected from restaurants, including chain fast food shops and Hong Kong style tea restaurants, and be transported to the factory. Food residues and water are removed by filtration and heating with low temperature. Next alcohol is added and reacts with the clean oil under high temperature. This process is called esterification and a mixture of biodiesel and glycerin is the production of the process. After purification, pure biodiesel and glycerin can be extracted in a proportion of ten to one. Pure biodiesel can be blended with fossil diesel and be used as a fuel of vehicles, while glycerin can be further processed to manufacture products like cosmetics. During the whole production processes, there is nearly no negative impact to the environment, for instance air and water pollution, when they are under appropriate control. 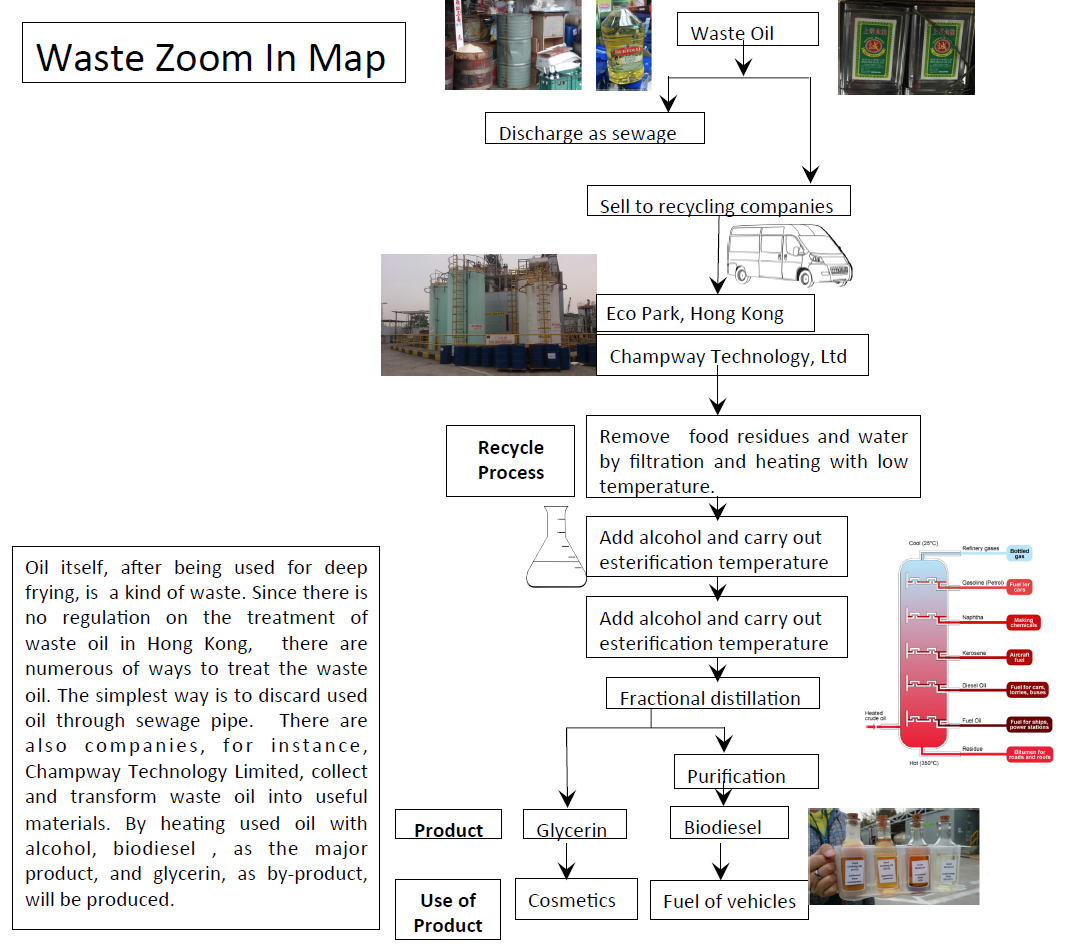