Throughout the thousands of years of human’s history, salt has been playing an irreplaceable role especially in terms of food preservation. Even nowadays, we still hugely depend on salt in cooking, processing food and preserving food. Hong Kong used to produce salt in the past centuries, but the last production base in Tai O closed in 1970s. Now, the salt we consume is all imported from other countries. Although we consume salt every day, most of us do not even know where it comes from and how it is produced. In the following, the food path of salt will be discussed in details.

As for rock salt mining method, the general idea is to extract rock salt from underground salt mines. After some safety precautions, small holes will be drilled on the wall of salt mines and explosives will be loaded. Then tonnes of rock salt will be blasted by the explosives. After that, the rock will be further crushed by machines and hoisted to the earth’s surface. The salt is ready for further processing.

Vacuum evaporation method is not commonly used.The principle of this method is to pump brine into some vacuum pans and then heat the solution to achieve evaporation. The low air pressure in the pans can lower the boiling point of the brine and thus save the energy. Therefore, the method can be regarded as artificial evaporation.

Most production companies would add anti-caking agents to the salt to prevent the formation of lump. Other additives will also be added to produce various types of salt. For example, in the production of iodized salt, potassium iodide is sprayed onto the salt. Stabilizers are then added to prevent the iodide from oxidizing and evaporating. As for some seasoned salt such as garlic salt, herbs, spices or flavourings will be added. After such extra processes and packaging, the salt is ready for distribution. 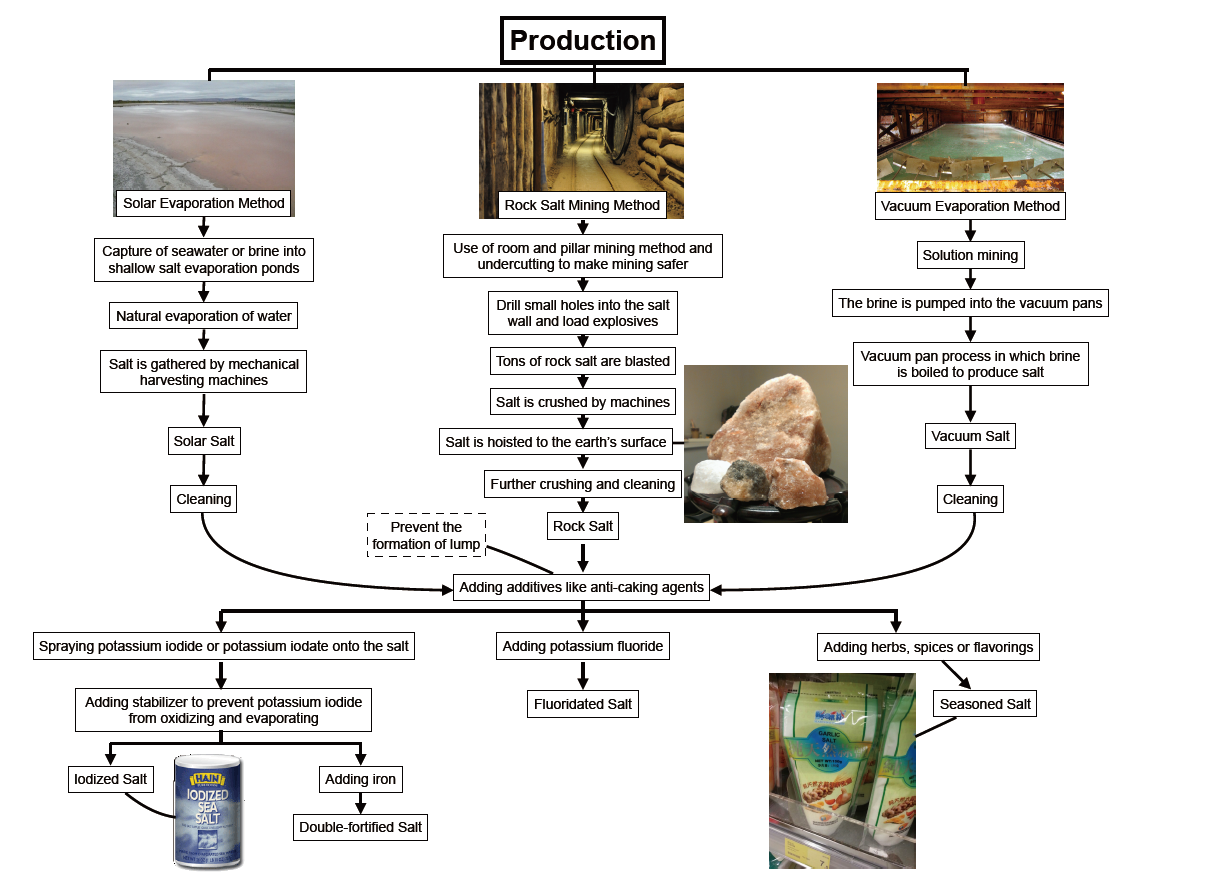 In the first step, local wholesalers will order salt according to their inventory status and the market demand. The quantity of order is as large as 20 tonnes for some wholesalers. After receiving the order, the producers will ask logistics companies to ship the salt, which is packed in boxes to the container terminal in Hong Kong. After the arrival of the shipment, local wholesalers will arrange delivery companies to transport the goods from the terminal to their warehouses. The time taken from placing an order to receiving the goods varies with the location of the producers. If the goods are exported from a faraway country like the U.S.A., the whole process may last for one and a half months to two months. 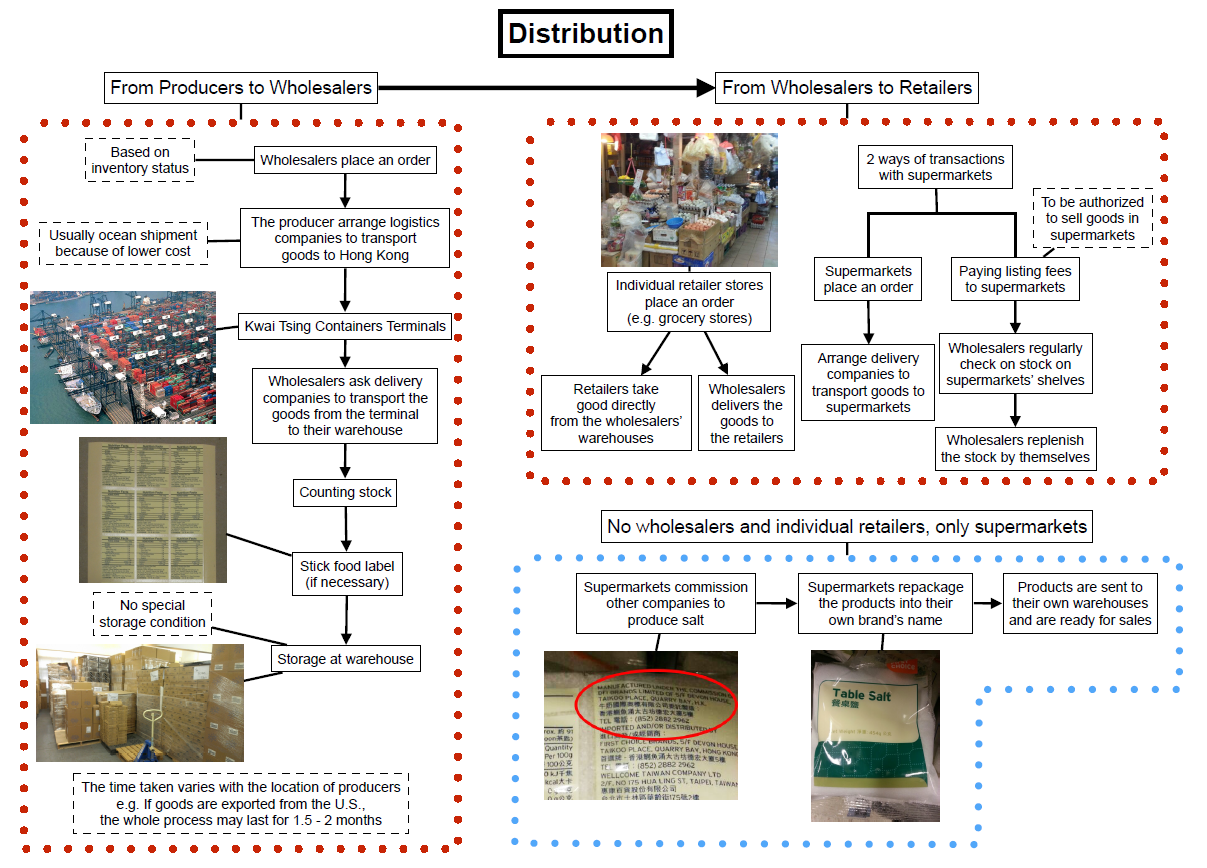 The production process of salt is relatively clean. The waste produced is not very harmful. In the production of refined salt, sodium chloride is usually the only desired product. The remaining substances such as magnesium chloride may not be used anymore. These substances are basically not harmful because they exist naturally in seawater. However, when water with high concentration of such substances are disposed of directly, the soil may be adversely affected. The growth of plants is therefore hindered. One disposal method is to dilute the leftover substance with large amount of water before the discharge of sewage. Some minor waste is also produced in the mining method. In extracting salt from salt mines, heavy metals may be filtered out. They are the undesired products and may cause harm to the environment. In general, the heavy metals are processed with some chemical reactions so as to make them no longer poisonous. The non-poisonous waste can then be dumped without causing harm. 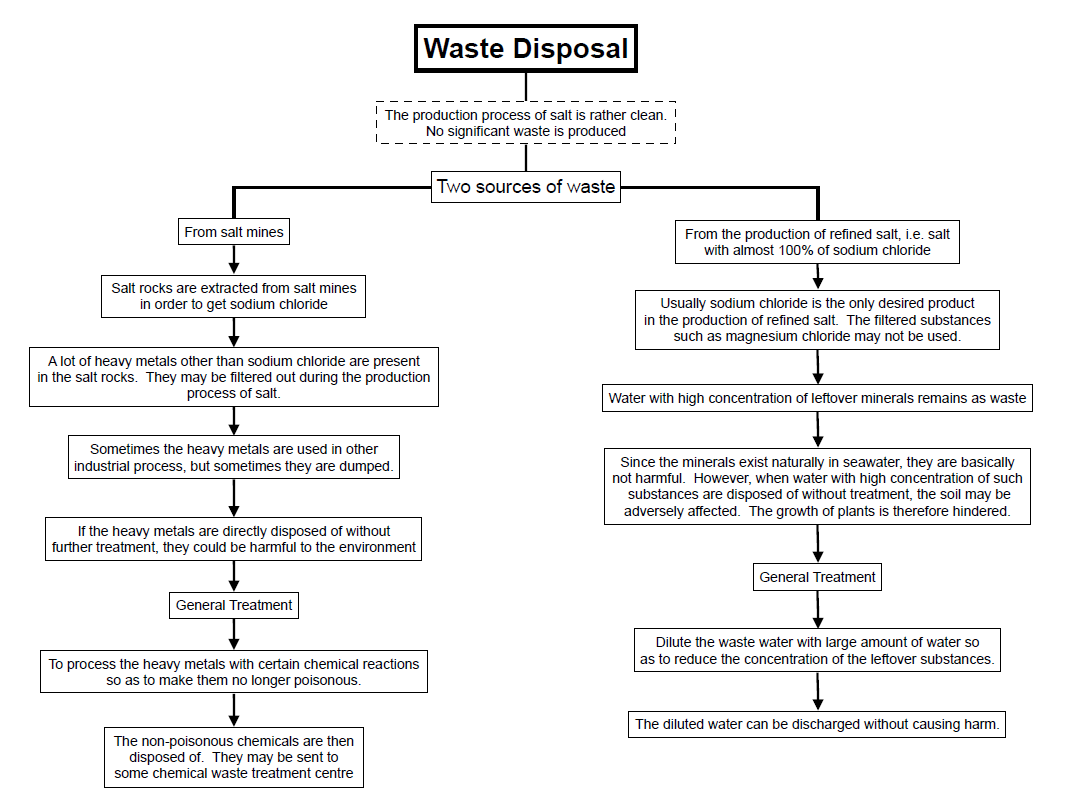