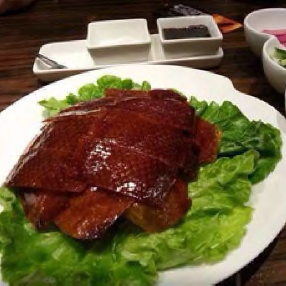 Roasted duck
Ducks have been very popular in their form of meat, eggs and feathers all over the world. The demand of duck products is still increasing, so the production of it has rapidly increased in order to fulfill the demand. So in our project, we will indicate how a large amount of ducks can be grown at the same time to fulfill the demand. Especially in Hong Kong, the demand of it increases dramatically, so we will also investigate how the large amount of ducks are transported from all around the world to Hong Kong and distribute to the customers and consume them.

What are the nutrition intakes for ducks in order to growth? Surprisingly, ducks and chickens require the same nutrients but in different ratios. Ducks require high energy diets, whereas chickens just need low energy diets. (W. David & Mildred M. Holderread, 2011) However, the costs of high or low energy diet are different, so sometimes it may depends on the feed ingredients’ cost and availability. Generally, a starter ration will be provided in the first two weeks for the new born ducks, then a finisher or grower ration for their remaining growth. The starter ration is usually in a form of crumble and finisher or grower ration is in pellet form. (W. David & Mildred
M. Holderread, 2011)

When the ducks are ready to be sold to other countries, they have to be slaughtered before doing so. First, the ducks must have to be confirmed with the Food Regulation under the NSW and must pass the Construction of Premises and Hygienic Production of Poultry Meat for Human Consumption. After the slaughtering process, then the ducks need to undergo the dressing process. Ducks are ready to be sold as fresh poultry in ordinary plastic bags. The freshly killed and well processed ducks were stored around 1°C–2°C, which can be kept safely for up to 10 days. (Processing, marketing and storing duck, 2013) So fresh killed ducks should be transported as quickly as possible, as the can be refrigerated for around 7 days. (Processing, marketing and storing duck, 2013)

In Hong Kong, there are just a few numbers of ducks farms, so the government has to import ducks in order to meet the demands. The importing rules are quite strict in Hong Kong. Any impoters who want to import frozen and chilled poultry into Hong Kong have to apply for an import license. (Import Control and Food Safety Guidelines, 2012) Based on the statistics, China has the largest amount of live and frozen poultry, followed by Brzail. Since there are 43 Waterfowl Breeding Farms and 19 Poultry Processing Plant in Mainland China, so the
ducks we buy in Hong Kong are mainly from it, where it occupies 94.91% of total import of ducks. (Hong Kong Merchandise Trade Statistics- imports, 2014)

For the transportation of ducks to Hong Kong, they are mainly moved by rail, road motor vehicle, by air and on ship. The ducks were settled inside moving cattle or crates, with ventilated environment, that the transporting vehicles should not be totally closed. (Transport of Livestock, 2001) If a country requires frozen ducks, then the live ducks will be transported to slaughter before exporting them.

After the frozen ducks arrived to the Hong Kong Airport from Brazil or Australia, they were transported to different cold storages and poultry processing plants. However, for those from Mainland China, they would be transported to Cheung Sha Wan import Poultry inspection Station first before delivering to the restaurants, wholesale poultry markets and supermarkets. Then customers can buy the frozen ducks from those markets and cook at home, or directly go to restaurants and consume the roasted ducks.

When ducks are on sale in retailers, they are usually ready-made. However, in the case of making Peking duck in restaurants, they are not. Ducks have to go through a series of procedures, like pumping air into the skin of the duck first (Simon, 2006), and then boiling it with water (Devon Kitchen, 1998) before coating with maltose syrup and then leaving it dry (Golden Lawyer, 2007) and then roasted. Similar duck cuisines, like roasted duck with rice in fast food restaurants are prepared using similar methods mentioned above.

Ready-made ducks are usually found at fast food restaurants, wet markets and supermarkets. Prices of the duck may vary depending on the organs or limbs that the customers want and the stability of the duck supply chain.

One of the intriguing phenomena is that though ducks belong to poultry, none can be seen at the Cheung Sha Wan Temporary Wholesale Poultry Market. This is partly due to the H7N9 ban on live chicken. A guess for another reason is that ready-made ducks are transported to retailers directly using techniques such as refrigeration or other temperature-regulating devices.

Such a phenomenon raises concerns over whether consumers’ health are compromised if they choose to eat duck as duck is considered an important ingredient in their main dishes, especially in festivities. Tighter controls over such bypass of wholesale market inspections have to be implemented.

Food wastes of ducks are treated in a similar manner to other kinds of food waste. They are either dumped to landfills or converted to compost in food recycling facilities, if there are any. For example, if ducks are dead before slaughtering in a farm, they will be sent to landfill and bury. For supermarket, those left behind that cannot be sold will be donated to the poor and people in need. For restaurants, those ducks wastes left will be either sent to food waste composting or donate to people in need. Sometimes, for the unused duck bones can be used for making duck bone soup for selling in restaurants.

Above all, monitoring logistics of duck and the food processing of duck is an essential part in maintaining consumers’ confidence on the food safety and availability of ducks sold in Hong Kong. After knowing that importing of ducks can help to meet the demands of it in Hong Kong, it helps a lot in the food network of our city, since there are not many local ducks farms. So Hong Kong people can enjoy the ducks produced by restaurants in the form of roasted or boiled with sauce, rice or noodles.