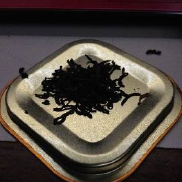 Black tea is the main ingredient of Hong Kong style milk tea while it is known that Hong Kong-style milk tea is largely comprised of Ceylon tea and Pu Lei. Black tea leaves are a mixture of broken oxidized leaves. In dry form, they appear to be black in colour, but turn red when brewed. Thus, in Chinese languages, black tea is typically referred to as “red tea”. Ceylon black tea, in particular, is one of Sri Lanka‟s specialties. Like any other kinds of black tea leaves, Ceylon tea leaves are also black and crisp in form, with a special aroma of citrus. Aside from supermarket, indeed there is traditional tea shop in Hong Kong that sell high quality black tea leaves. In essence, what are the different levels of procedures of turning tea leaves into a cup of brewed tea? 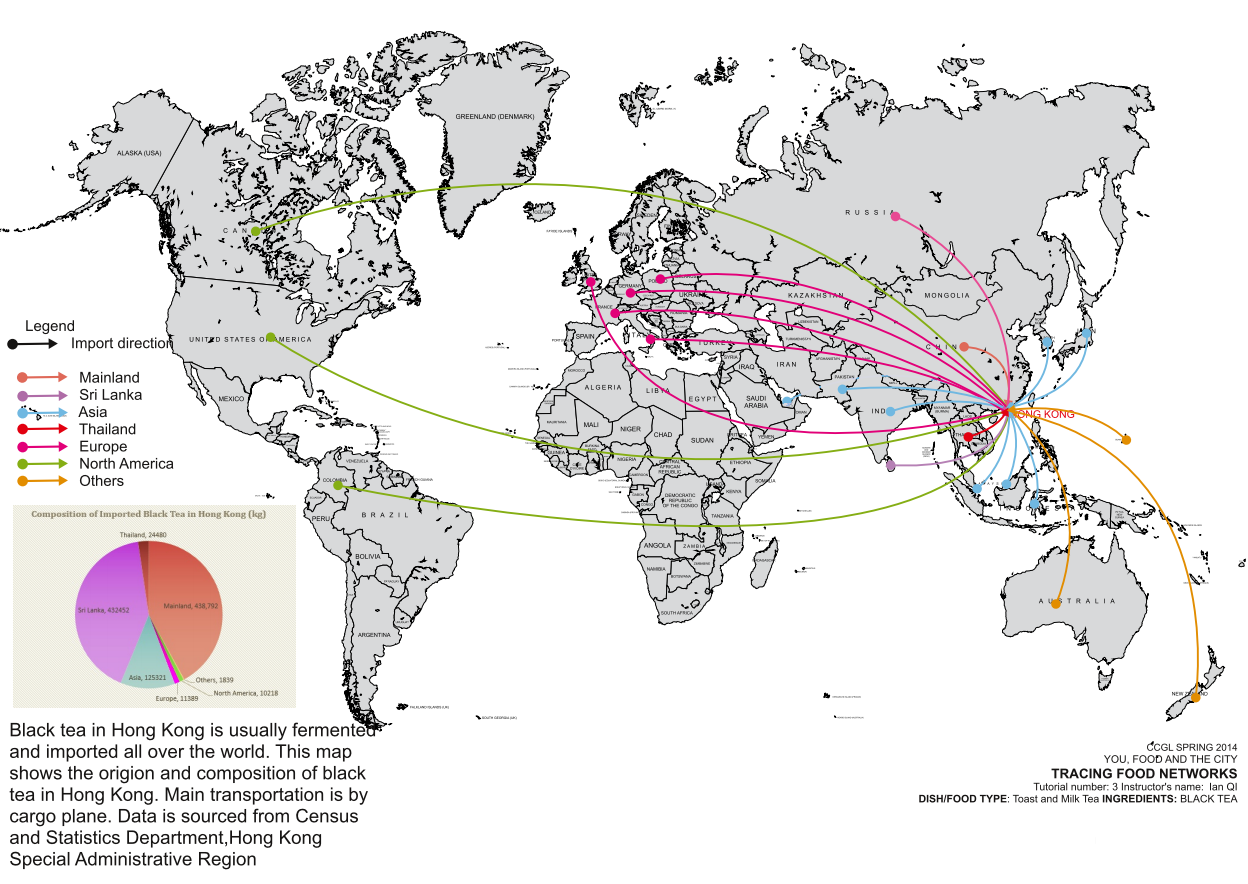 Black tea leaves are usually cultivated using the contour planting method with tea bushes planted in lines which follow the contour of the slopes. During harvest, the tea leaves are plucked by machineries and then transported to nearby factories for processing. To this day, however, Sri Lanka still keeps the primeval method of picking each tea leaf by hand instead of by mechanization.

The next step is processing which is important to the eventual quality and value of manufactured tea leaves. After tea leaves are plucked, they will be quickly weighed and monitored under supervision and then transported to nearby tea factories. Thereafter, they will be spread in troughs to remove excess moisture in the leaves. The withered tea leaves will begin to ferment upon being exposed to heat from the natural air temperature. After the fermentation process is complete, the tea leaves will be inserted into firing chambers to retain the flavour in them. Upon completion of the aforementioned process, the tea leaves will turn black and become harder in texture. The processed tea leaves are then sorted and graded in accordance with their shapes and sizes. Eventually, the processed tea leaves will be weighed again and packed into paper sacks with the product name, net weight, compositions and expiry date printed on top, and then transported to tea brokering companies. 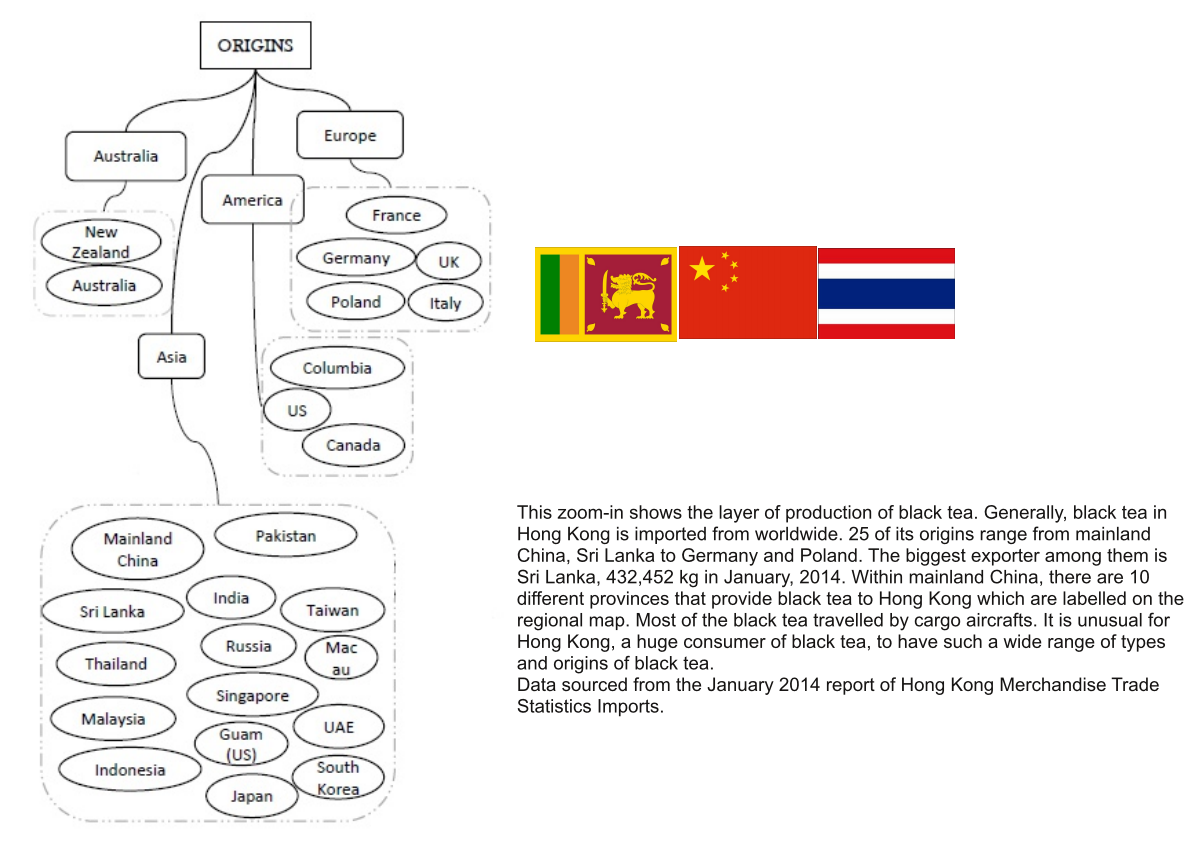 After the processed packages of tea leaves are transported to tea brokering firms, they will be exported to different parts of the world primarily by cargo planes. Packages of manufactured black tea leaves from different expanses ranging from Sri Lanka and Thailand to Germany and Poland will be transported by cargo planes of logistics companies, such as Carson Logistics and DPI Logistics Ltd., to the Hong Kong International Airport in Chek Lap Kok.

Upon arriving in the Hong Kong International Airport, packages of manufactured black tea leaves will be transported by the trucks of warehouse logistics companies to their own warehouses for temporary storage. For instance, trucks owned by the Tsit Wing Group will convey packaged black tea leaves from the Hong Kong International Airport in Chek Lap Kok to its warehouse in Kwai Tak Industrial Centre for provisional storage. In there, the packaged tea leaves are packed into boxes with the product name, batch number, net weight and information of the logistics firm and the retailer printed on top. Different warehouse logistics companies will transport the boxes of processed black tea leaves to their contracted retailers. 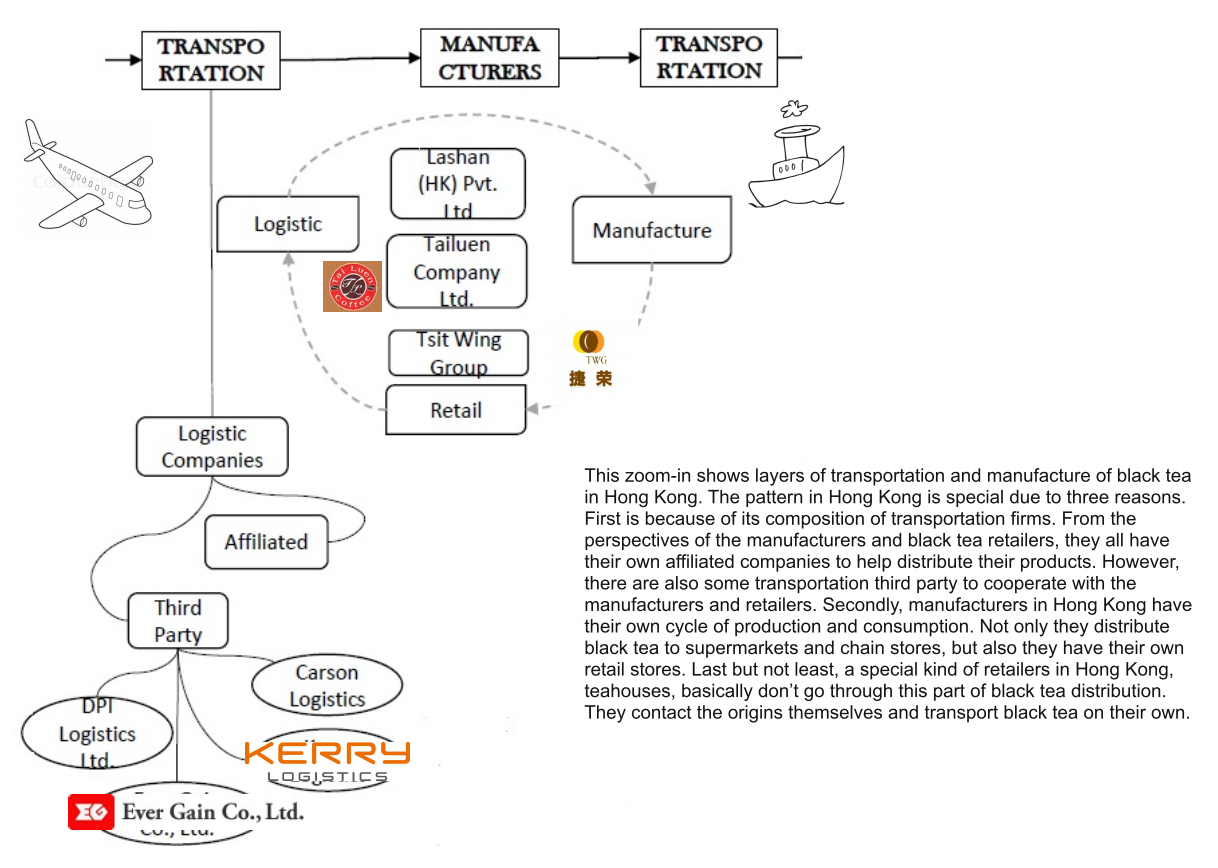 At the stage of production, during harvest, some by-products, such as twigs and coarse leaves, could be mixed into the tea leaves. If machineries are used in plucking tea leaves from the tea plants, carbon dioxide will also be produced from powering the machineries. On the other hand, pollutants and chemical wastes are again produced during the combustion of fuels in powering the factories.

At the stage of consumption, wastes produced by the stores and consumers are so vast in amount that they take up the largest composition of all outputs. The first type of waste is the residue of tea leaves, which is impossible to avoid. Yet many recycling methods, such as turning residue into dehumanizers, fertilizers, sachets and even medicine, could be employed to make fully utilize the residual tea leaves. Packages of instant tea products amount to a large quantity of solid wastes as well and most of them eventually end up in the landfill. 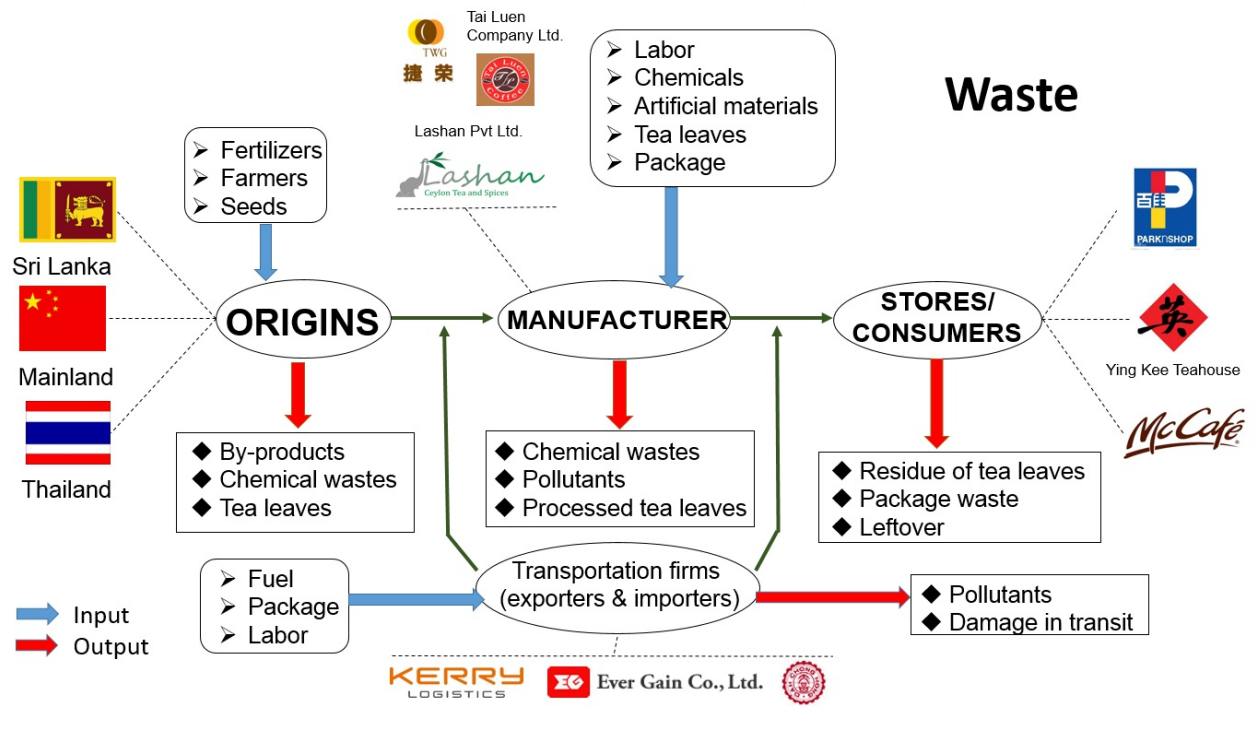