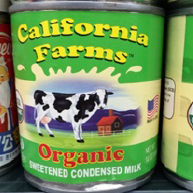 Often used in local cuisine and speciality, sweetened condensed milk is seen as one of the distinct features marking the uniqueness of Hong Kong dishes. It can be more than a food source, symbolizing an important part of local food culture and manifesting collective memories of the older generation. Local specialties served with it include French Toast and Piggy Bun, using condensed milk as a topping spread. Being a popular ingredient in Cha Chaan Tan food, it can also be added in beverages such as milk tea, coffee, Horlick, Ovaltin etc. With its irreplaceable role in local food culture, in the following parts, in-depth investigation will be made starting from the production of sweetened condensed milk to consumption.

To be cost- effective, manufacturers usually get these ingredients from nearby countries. Take the production plant located at Qingdao, China as an example. The manufacturer gets milk from Mongolia and sugar from Heilongjiang and Guangxi by train or truck, depending on the distance. 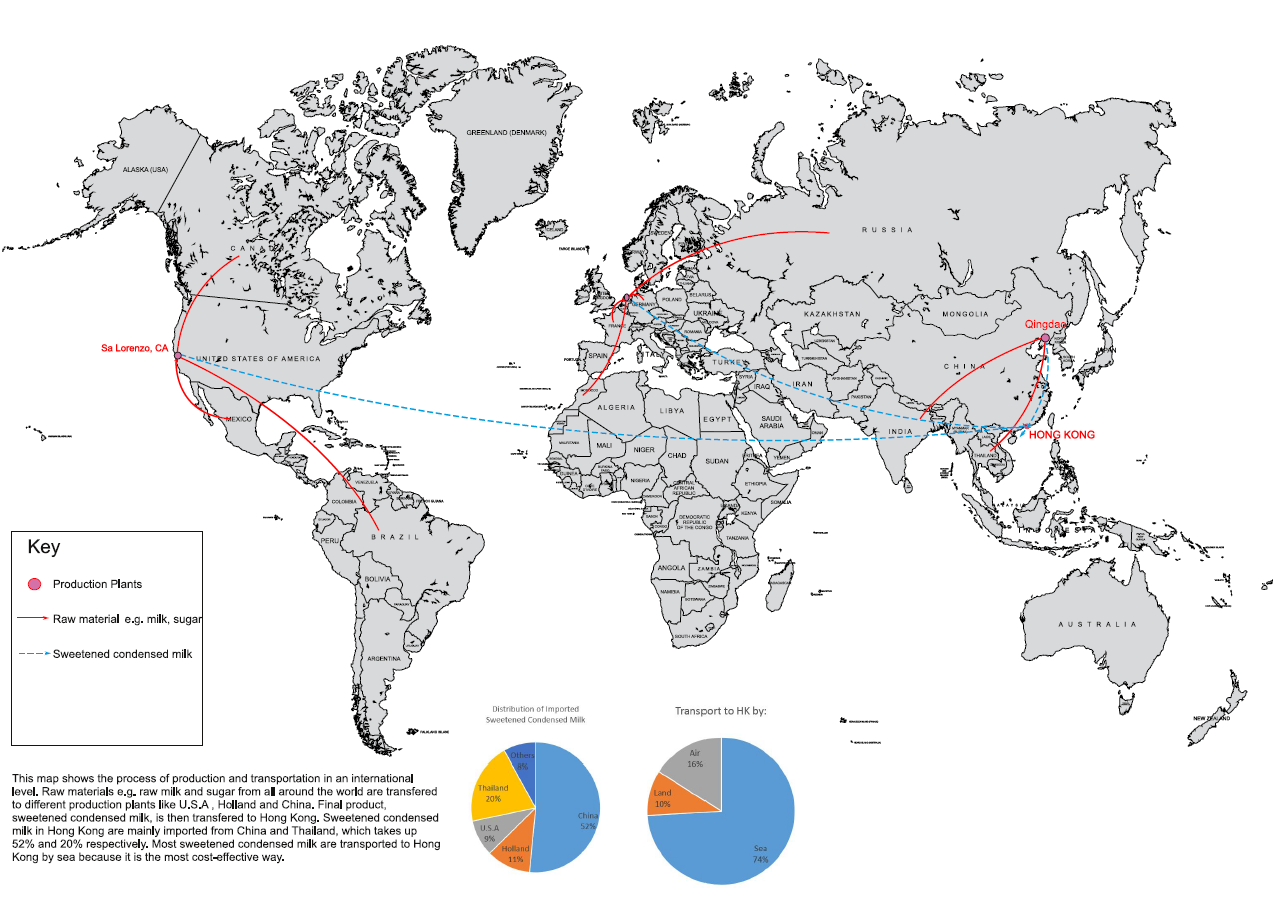 The production of sweetened condensed milk requires two main ingredients – raw milk and sugar. Since these are ingredients essential to its production, there would first be a brief introduction to the production of these items. Milk can be obtained from cattle, sheep or goat on a dairy farm. It is usually collected in a milking machine or milking shed, then refrigerated and packaged in a milk churn and transported to production plants. Since the raw milk would be processed later, it need not go through pasteurization to ensure safety. As for sugar, there are two types of production, the use of sugar beet or sugar cane. They involve more or less similar processes, only that sugar cane requires further refining.

First, raw milk is heated to 85-90 degree celsius to rid microorganisms and the evaporation of water occurs in the process. The milk is then mixed with sugar, achieving in a 9:11 ratio of sugar to milk, followed by cooling and lactose crystallization. It is then mostly packed into steel/ aluminium cans, with a ring-shaped lift for the convenience of opening. Some may also be packed in plastic tubes to make it easier to squeeze out for use and spread. After that, they would be put in cardboard boxes for the convenience of distribution and transport to other countries. 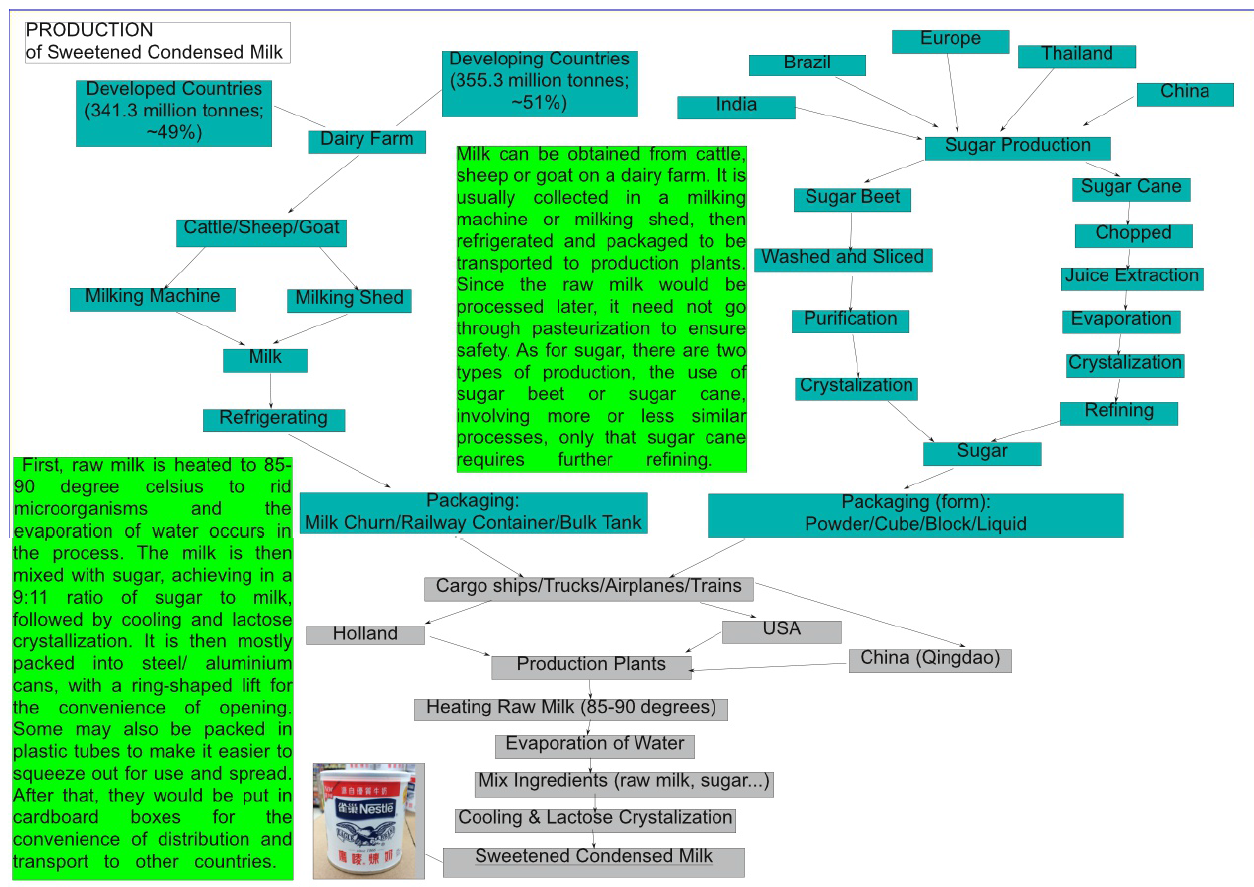 Sweetened milk which transferred to Hong Kong by cargo ships will be unloaded at Kwai Tsing Container Terminal. Chain supermarkets like Wellcome and Park N Shop will pick up the sweetened condensed milk there directly and transferred to their own storage by trucks. For ParkNshop, its main storage is at Fo Tan while Wellcome’s main storage is at Kwai Chung. Sweetened condensed milk will be further distributed to different branches in Hong Kong by trucks. Apart from supermarkets, wholesalers also get their commodities at Kwai Tsing Container Terminal and store them in their storage. Afterwards, they will then distribute the sweetened condensed milk to different restaurants according to their order by trucks or vans. 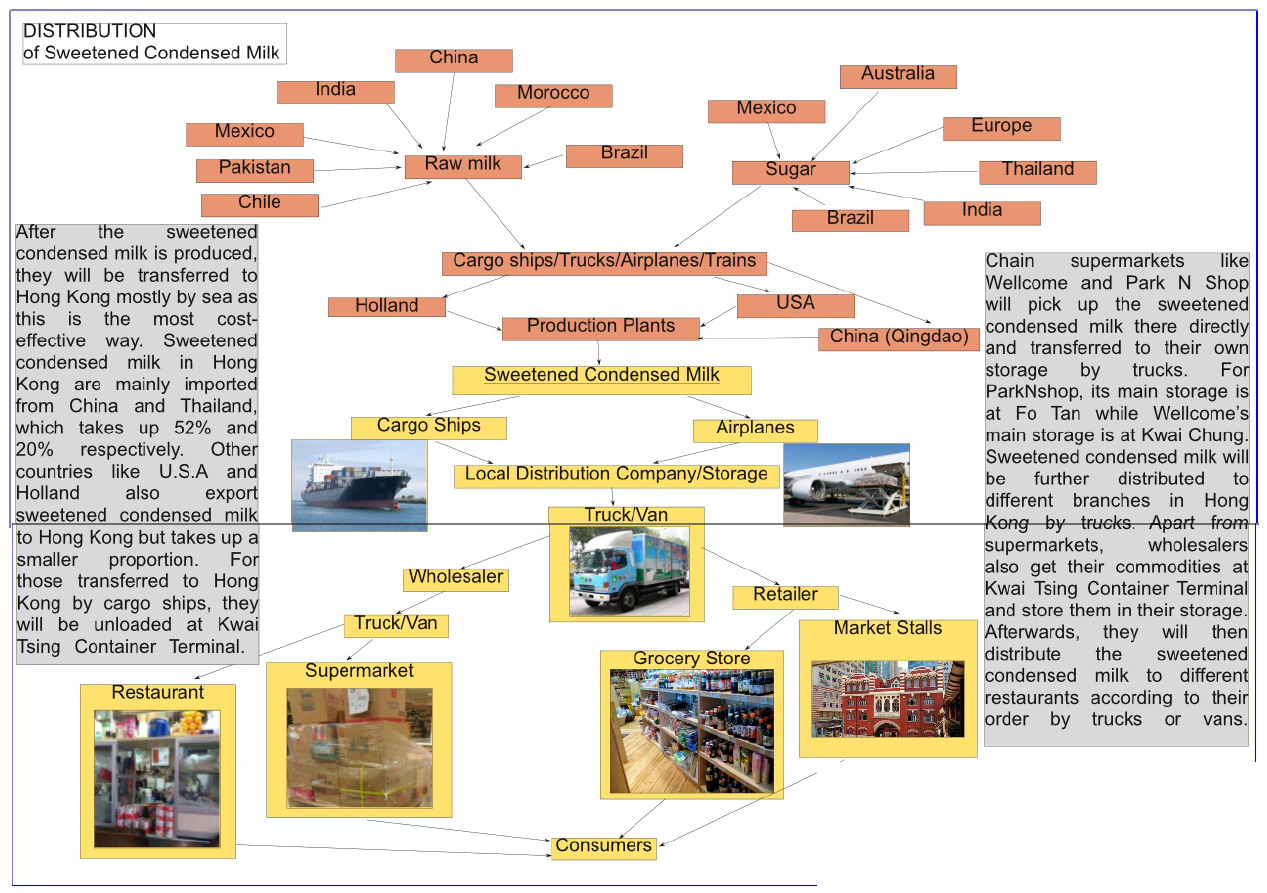 In the production of milk, there may be large amounts of animal waste. These may be liquified and pumped into a composting pond to facilitate irrigation and fertilization. The animal litter may be converted into biogas as well. In addition, the production of sugar may produce waste such as bagasse and beet pulp after the extraction of sugar. These can be used in incineration and burnt to extract energy. Moving on to the packaging of products, waste such as plastic tube containers and cardboard boxes may be disposed. Plastic tube containers may mostly likely be dumped in landfills, so it is suggested that steel cans may be used instead as approximately 67% of it can be recycled. Cardboard boxes can be collected and recycled as well.

In the distribution of sweetened condensed milk, air pollution may occur and global warming may be worsened. To solve this problem, environmentally friendly vehicles have been introduced like electric cars. Vehicles including trucks and vans have been required to used less toxic and polluting diesel as fuel too.

Moreover, wastage problem may exist at the consumption level as well, since consumers may have excess condensed milk in their daily usage or may hold overdated products. Possible solutions may include saving leftovers in containers and emptying overdated condensed milk cans for recycling. 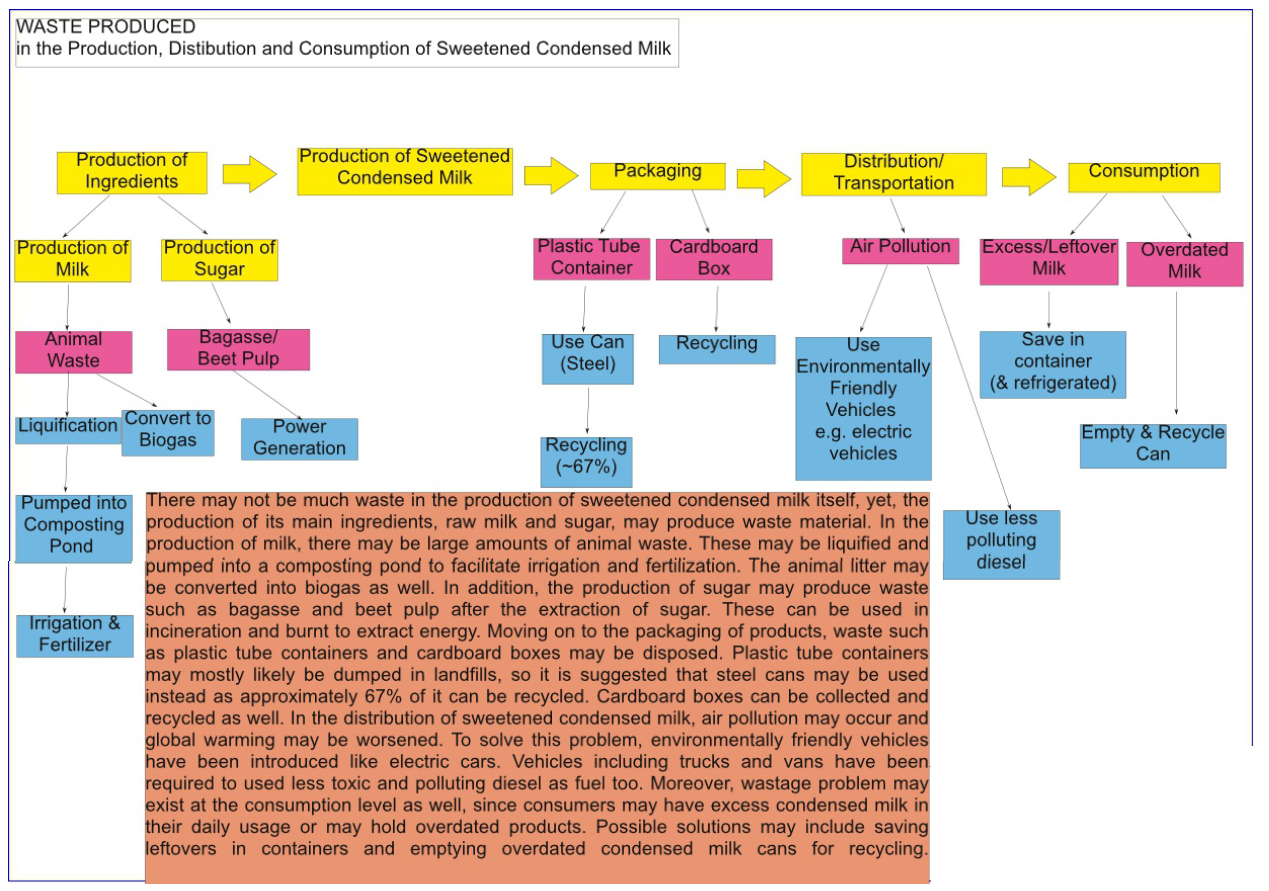