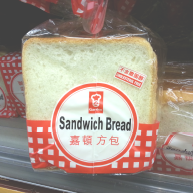 Thick white toast is the main ingredient of the Hong Kong style French toast. It is also the food almost people all over the world consumes every day, mostly for breakfast. It can be easy found in supermarket or local bakeries. Simple as it seems to be, thick white toast is made of different ingredients which include eggs, flour and wheat. In the following, the story behind thick white toast will be revealed.

The maps shows the supply of toast ingredients globally. 99% of eggs in Hong Kong are mainly imported from mainland China (60-70%). The poultry farm supplied eggs are mostly located in Southern China like Hu Nan, Shan Dong, Jiang Su and Liao Ning. America and Thailand also contribute to 20% and 7% of eggs.

Wheat is a basic ingredient for producing flour. Many countries import wheat from the US and Canada for flour production, like China and Japan. As for the supply of flour, 70% comes from China, 15% from Japan and 5% from Taiwan and 3% from Australia. Wheat farm are mostly found in Northern and Western China, for instance Hei Long Jiang and Shan Xi. 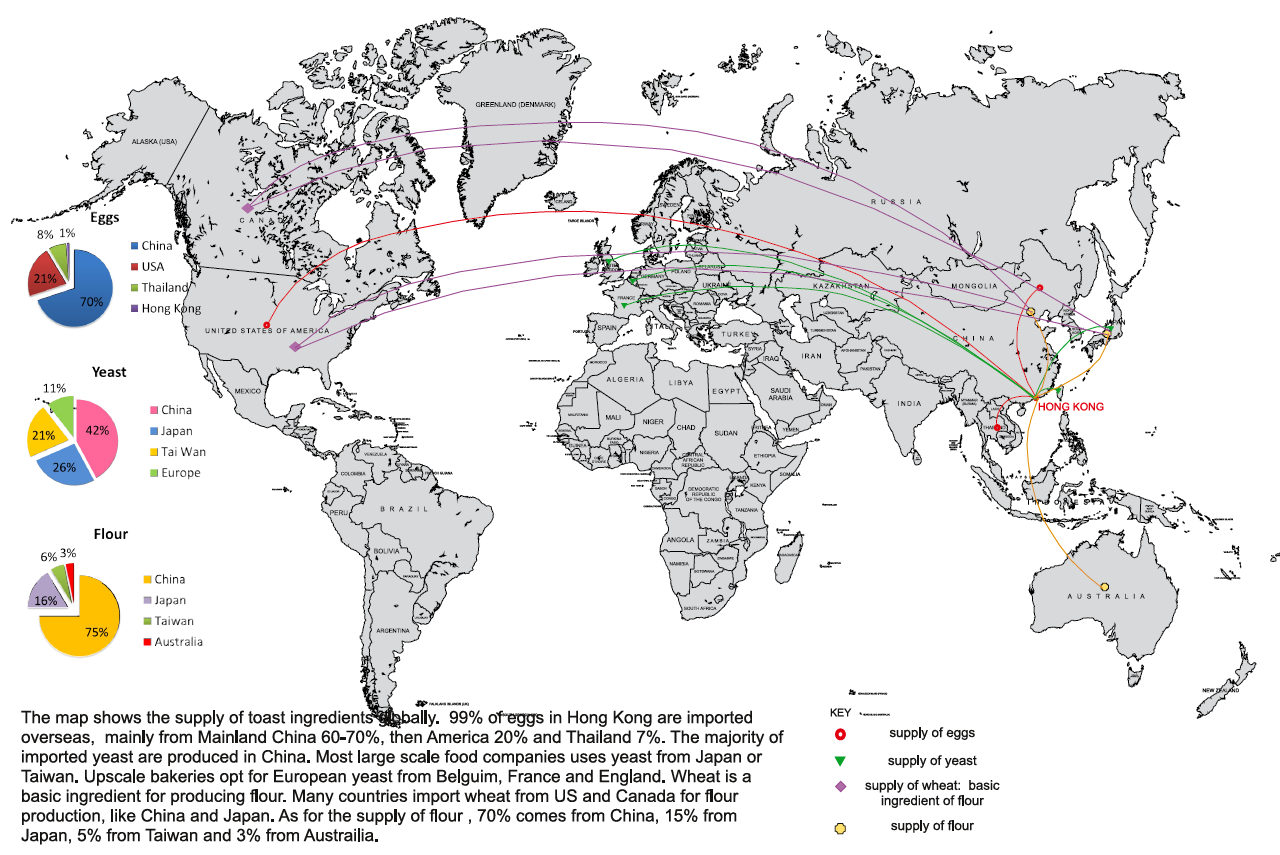 Take Norkia, a small bakery in Shatin as an example, workers there purchase minor ingredients like sugar and butter from the nearby Shatin wet market and the major ones for instance yeast and flour from Huning export and import company limited, a food wholesale company which mainly supplies flour and dairy products produced in Mainland China through sea-transit. The bakery also own a small van for transporting ingredients.

Norika produces around 25 packs of toasts (5 toasts per pack) each day. It orders packaging wraps from Kizui companies and collect them from the company’s office in Kwun Tong every month. After packaging, the toasts will be put on shelves for sales. Some small bakeries may have 2-3 branches scattered in nearby districts so they will transport toasts using vans. 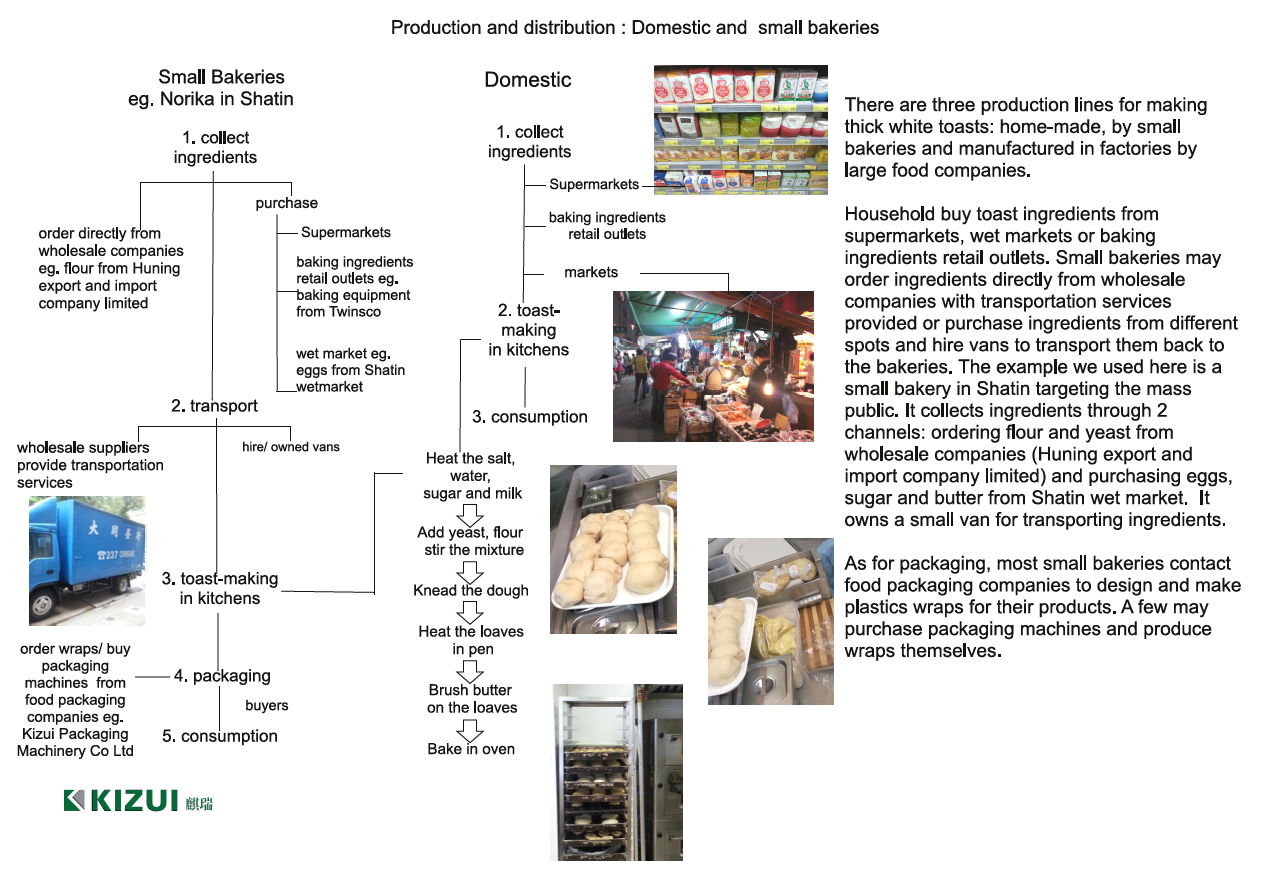 Garden Company Limited owns factories in Jiang Su and Yang zhou so it obtains food from wholesale suppliers in nearby provinces and transports them to Hong Kong. But unlike other units which produce handmade bread with simple equipment, mass production is used with advanced technique and machines. Finished toasts have to be inspected before distribution to ensure their tastes and qualities.

Very often these companies do packaging themselves by employing machines like heat sealer, label printer and palletized robotics. As a large quantity is produced, their distribution network is also quite wide, like Garden divides its products into 2 categories: Finished toasts and frozen dough. Finished toasts will be sent to their cooperating partners, for example Garden provides bread for airline catering (Dragan airline), restaurants (Cafe de coral), fast food chains (McDonalds), and also to bakeries or restaurants under its own brand. A large portion will be sent to supermarkets, retail outlets or convenience stores for sales. Garden also provides frozen dough to restaurants for further processing. 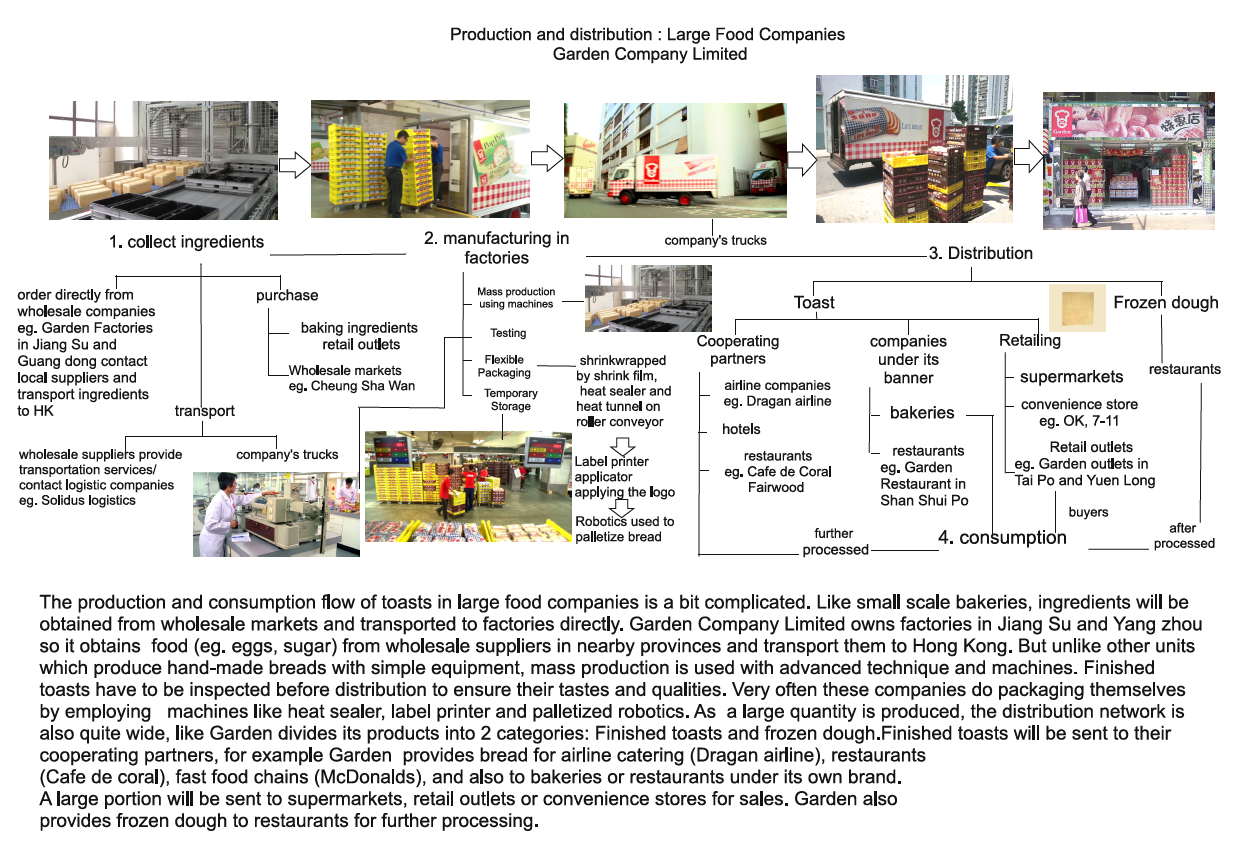 Wastes like flour, sugar dust, dough, stale toast are massively produced in different stages of production such as food processing, retailing and consumption, especially during the last stage-consumption. In Hong Kong, unsold breads are actually the main cause leading the bakery waste.

Currently, bakery waste will be incinerated, composted, or disposed of in landfills. However, there are other alternatives to deal with bread waste. In Hong Kong, bread waste is commonly used for charity purposes. Each unit like producers and retailers can donate toast with lower economic value or unsold ones to the needy. ‘Bread Run’ – a voluntary activity held by Feeding Hong Kong engages volunteers in the nightly collection of surplus fresh bread (Feeding HK, 2014) and deliver to those who are in need.

Also, dried and cleaned bakery waste can be used for agricultural purpose. Processed bakery powder can be mixed with other nutritional additives such as minerals, vitamins and served as fodders. Research has proved that bakery waste is available for animal feeding without altering intake and nutrient digestibility. This treatment method is very common in some developed countries such as the United States because it is effective to reduce waste and it has high nutritional value for animal feeding. 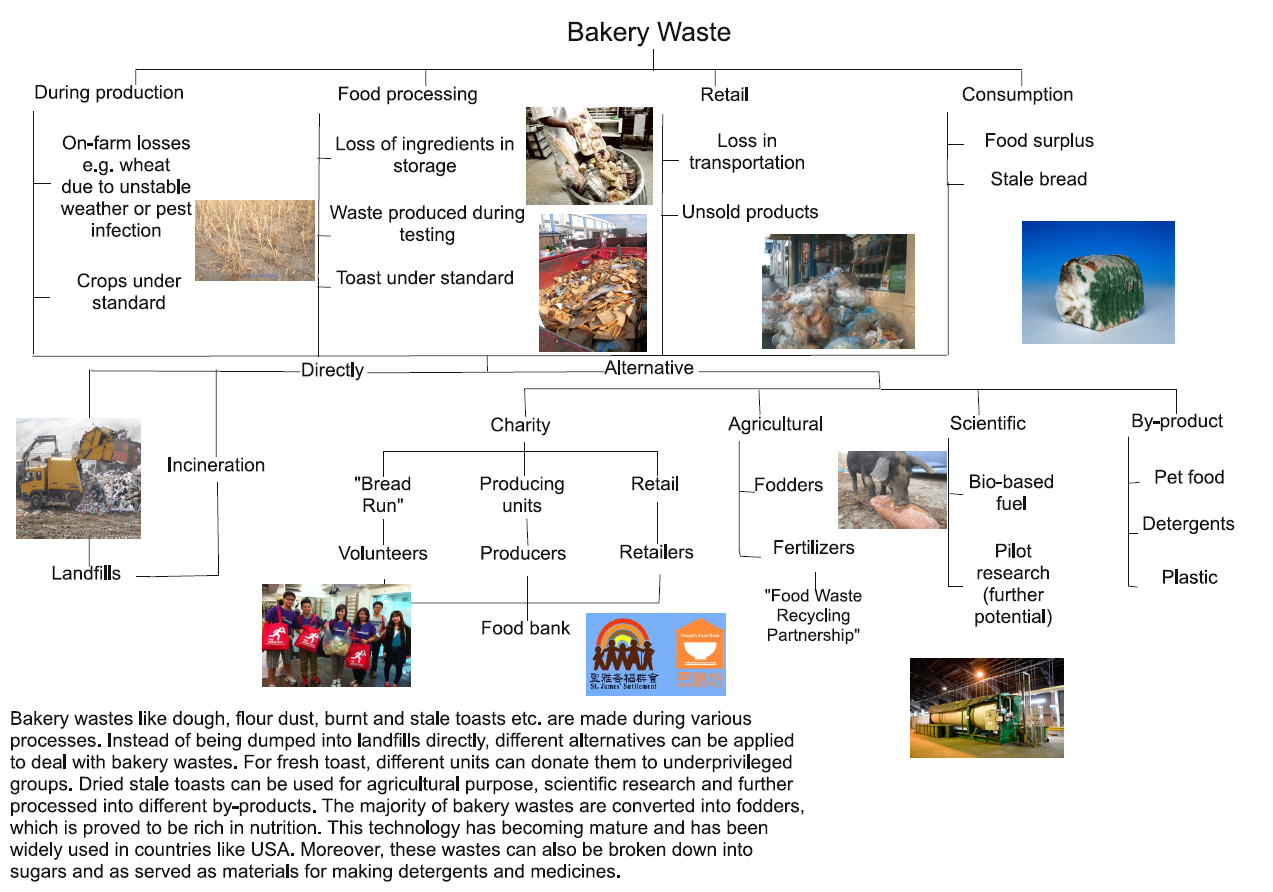